Battle of the Bulge by Rick Atkinson 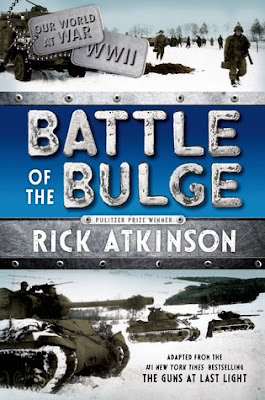 Judging from my stats, there are still a lot of readers interested in books about WWII.  Like me, most are interested in fiction and stories of courage and survival, whether they take place in countries under Nazi occupation/siege, near the front lines, or are stories about the home front.  Not many really seem want to read the details of military strategy or battles fought.  But sometimes a book like that comes along and the author has made it so interesting, it appeals to everyone.  Pulitzer Prize winning author Rick Atkinson is one of those writers who can bring major WWII battles to life, and adapting his adult books for young readers.  He did it in D-Day: The Invasion of Normandy, 1944 and he has done it again in Battle of the Bulge.

By December 1944, it was looking pretty certain that Germany was going to lose WWII.  Refusing to accept defeat, Hitler came up with a plan he called Herbstnebel (autumn mist).  It was to be a surprise attack against Allied Forces in the forest of the Ardennes in Belgium, and Hitler ordered that nothing in the plan was to be altered, even though his advisers had grave doubts about the success of Herbstnebel.

And the surprise element of Hitler's last ditch Western Front offensive hit was indeed a surprise attack for the Allies.  Unlike the D-Day invasion, the Allies did not have time for planning, so the surprise element of the attack resulted in one of the worst battles of World War II for them.  How bad?  According to Atkinson, in just one day of the fighting, December 19, 1944, 9,000 American soldiers were captured by the Germans.

The Battle of the Bulge began on December 16, 1944 and ended in German defeat on January 25, 1945.  Much needed American reinforcements arrived on December 26, 1944 with General Patton, and proved to be a great boon for the Allies.  It must have felt like a Christmas present to the soldiers already at the front.

Atkinson used the same format for Battle of the Bulge that he used in his D-Day book for young readers.  There is plenty of informative front matter to help readers understand the main part of the book.  This consists of maps, who the key players were, Allied and Axis Commands, and a timeline of the war.  Atkinson's Back Matter is even more extensive and consists of many interesting topics, especially the kind that young readers might want to know about after reading the book and seeing the copious photographs he includes.  Topics like what U.S. soldiers wore in a battle that happened during such a bitter cold, snowy winter (as you can see below), or what weapons were used, and even what happened after the Battle of the Bulge ended, even the use of dogs on the battlefield. 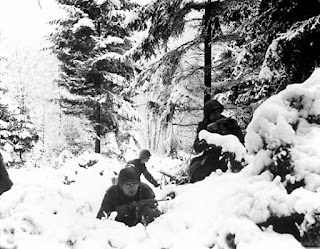 The book is divided into four sections, each section covering both Allies and Axis sides.  The first section covering the Western Front form the beginning of the war to November 1944, for readers whose knowledge may need to be refreshed or for readers who know nothing about the war.  Atkinson's second section focuses on Hitler's Plan; section three follows the events as they unfolded on the actual day of the German offensive; and finally the days following that.

In war, planning and fighting a battle are very complex parts of war, consequently, writing about a battle cannot possible be done as a linear narrative.  For that reason, it sometimes feels as though Atkinson has simply cut and pasted parts of his adult book to make this a book for young readers.  But this is meant to be an introduction to this important, pivotal battle and in that respect, I think Atkinson does a very good job.  As always, his research in impeccable, and his writing clear and, while taking into account he is not writing for an adult, he does not condescend to his readers, either.

The Battle of the Bulge was never something I was particularly interested in after watching a old movie about it on TV when I was a tween.  It was cold, and bloody and, not knowing anything about it before  I watched the move, I didn't really understand it.  Natuarlly, I never felt inclined to read anything about the battle of the bulge t before this book.  I feel like I have a much better handle on the events of this offensive now and hope it will help kids understand its importance in the overall WWII events, too.