Nim and the War Effort by Milly Lee, pictures by Yangsook Choi 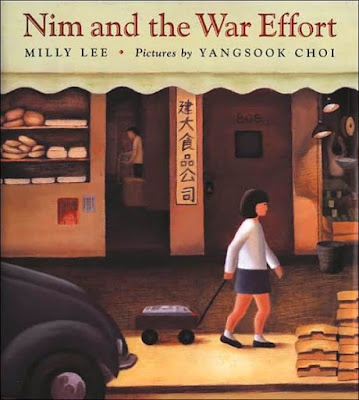 It's 1943 in San Francisco's Chinatown and young Nim and her classmates are all competing to see who can collect the most newspapers for the war effort.  So far, Nim and Garland Stephenson are in the lead.

One morning, Nim takes her wagon to her aunt's house to pick up some papers tied with a red string, but when she gets there, the papers are gone.  Disappointed, Nim decides to look around the neighborhood to see if she can find other papers to add to her pile at school.  Along the way, she runs into Garland, who not only has a pile of papers tied with a red string, but he is taking the new ones that were just delivered to the newspaper stand that morning.  When Nim confronts Garland about both piles of papers, he tells her they are his now and Mr. Wong shouldn't have left his lying on the sidewalk.

Garland's wagon is so overloaded, that the papers spill all over the sidewalk when he tries to turn a corner.  While he is picking them up, he tells Nim she can't win the contest, that they are in an American war and that only an American should win the newspaper competition and "not some Chinese smarty-pants."

Undaunted by Garland, Nim decides she has some time after school to search for more papers before she has to go to Chinese school, which her Grandfather has always been adamant she not be late for or miss.  But when she approaches the doorman of a big building in Nob Hill and asks if there are any newspapers she can have for the war effort, he is more than obliging.  To Nim's amazement he opens the door to a room full of newspapers, stacks and stacks of them.  Surely, Nim would win the competition with all those papers.  After all, Garland said it should be won by an American and Nim is as American as he is.  But how can she get all those papers to the school and still get to Chinese school on time so she doesn't anger her Grandfather?

Nim's solution will surprise readers but her reasoning is sound and she is only doing what she was taught to do - call the police and ask for help.  But, she comes home late, greeted by an very angry Grandfather who says she has disgraced the family by being seen riding in a police paddy wagon.  Can she win back her Grandfather's respect and trust when he learns the truth about what happened?

Nim and the War Effort is one of those picture books for older readers that packs in a lot of information about kids and WWII.  Kids did a lot to help the war effort, and really throw themselves into it, just a Nim and Garland do for the scrap paper contest.

Garland's cheating is a sad note about needing to win the contest.  There was nothing at stake for him, except to show her up.  Garland's behavior reminded me of the saying I was taught as a girl:
"Winners never cheat, and cheaters never win" and that's just what happened.

Cheating is one issue, but Garland also enables Milly Lee to quietly but effectively take on issues of racism and misplaced patriotism in her debut children's book.  Garland only sees Nim as Chinese, his attitude towards her, that she isn't a real American, was common after the US entered the war.  A lot of Chinese people were ostracized during WWII by those who lumped all Asians together and felt it gave them the right to mistreat them.  Lee adds a nice touch of reality when she shows grandfather wearing a pin with the American and the Chinese flag, something many Chinese people did to differentiate themselves.

Lee also takes the reader inside Nim's home, where Chinese American family life is thoughtfully depicted.   Young readers may find the relationship between Nim and her grandfather a little stiff and formal, and probably more realistic for the 1940s than in today's world.  He is a real patriarch, with Nim's mother and grandmother firmly in the background.  I thought it interesting that there is no mention of Nim's father.  Was he away fighting the war?  Another interesting note is that her grandmother has bound feet, something that most of today's young readers might not know about.

The muted realistic illustrations give the readers a true feeling of the past by using a palette of yellows and browns, making Nim's white shirt and red wagon really standout.  Like Lee, this is a debut children's book for Yangsook Choi and the two really seem to have been on the same thought-wave, producing a thoughtful, thought-provoking picture book that no doubt generates all kinds of questions and observations among young readers.