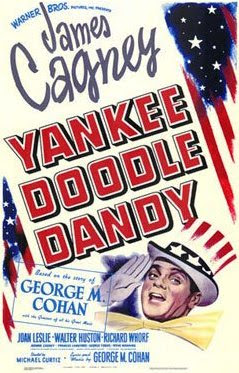 Yankee Doodle Dandy is a historically not terribly accurate bio-film about the life of George M. Cohan (James Cagney).  It begins when he is summoned to the White House by President Franklin D. Roosevelt. There, he begins to tell the President the story of his life, beginning with his birth on July 4, 1878 in Providence, RI, where his father was performing in vaudeville.  The scene then leaves the Oval Office and flashes back to that date.

From there on, in voice overs, Cohan narrates each scene change as time go by, and he and his sister Josie grow older and join in their parents vaudeville act, becoming The Four Cohans.  We seea very talented though somewhat arrogant George as a boy starring in Peck's Bad Boy, and blowing the family's chance to play Broadway with his demands.

Later, George meets Mary, the girl he will marry, and for whom he wrote the song "Mary is a Grand Old Name."  The whole time the family is performing, George is writing musical theater scores, but no one is interested.  Finally, he meets Sam H. Harris, also not succeeding in selling his material, and the two become partners and successes with their production of Little Johnny Jones, most noted for the songs "Yankee Doodle Dandy" and "Give My Regards to Broadway."

When the US enters World War I in 1917, George tries to enlist, but is told he is too old at 38.  Leaving the recruiting station, he runs into soldiers and an Army marching band, and as he listens to them,  the song "Over There" begins to formulate in his head.

But Cohan's professional successes and failures isn't the only storyline.  The movie also follows his family life, though only when it suits Cohan's story.  For instance, his sister get engaged and we never find out what happened to her until later we learn that both his mother and sister have already died.  And after Cohan marries Mary, there is no mention of their three children, or his first marriage, for that matter.  The whole movie I thought they were childless because of his career.

Eventually, Cohan retires and travels the world, but when he is offered a part on Broadway playing the President, he jumps at the chance to go back to the smell of the greasepaint, the roar of the crowd.  And that's when he is called to the White House.  Thinking he is in trouble, instead he is give the Congressional Medal of Honor for his two songs,  "You're a Grand old Flag," written in 1906 for Cohan's musical play George Washington, Jr and "Over There" written in 1917.

The finale is priceless, even if anachronistic.  As Cohan leaves the White House he joins a parade of soldiers singing "Over There" and obviously heading off to fight in WWII.  Cohan received his Medal of Honor in 1940, a year and a half before the US entered the war.  But, so what, it is still an ending that is sure to bring a tear to the eye.

Besides James Cagney Yankee Doodle Dandy has a wonderful cast.  There is Walter Huston as his father Jerry, and Rosemary de Camp as his mother Nellie, Cagney's real sister Jeanne ss his Cohan sister Josie, and Joan Leslie as his wife, Mary.  Richard Whorf played Sam Harris, Cohan's partner and one of my favorites, S.Z. Sakall, has a small but pivotal part in the film (Sakall played Uncle Felix, the chef in Christmas in Connecticut).

Yankee Doodle Dandy is a little corny, a whole lot energetic and off the charts flag waving patriotic propaganda now that the US had entered WWII.  Still, the dancing numbers are wonderful, and although James Cagney is not Fred Astaire, I loved the tap dancing scenes.

Yankee Doodle Dandy has been named as one of the American Film Institutes 100 Greatest American Films; James Cagney won the Academy Award for Best Actor in a Leading Role; and the Library of Congress chose it to be preserved in the National Film Registry for being "culturally, historicaily or aesthetically significant."  And while it is certaainly historically significant, there is one scene that bears this out in a rather offensive way when The Four Cohans are seen performing in blackface.  Historically accurate, sadly yes, but no less odious to the modern viewer.

Here is the offical movie trailer from 1942:

As long as this is a Yankee Doodle day, I thought I would also include a copy of the Uncle Sam movable paper puppet you can put together.  It's been circulating around the Internet for a while and we actually made one yesterday, but it went home with one of the kids and I didn't have time to make another.  I printed it out on 8 1/2" by 11"white card stock, cut it out and just followed the directions.  As far as I know, it was from an old postcard, printed in London, from around 1914 (I couldn't find a recent copyright, so I assume this is in the public domain now). 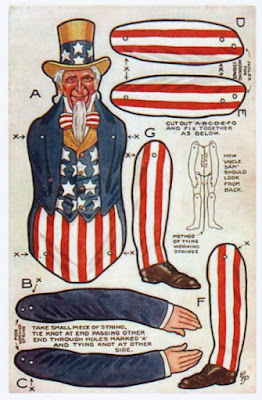 Oh, this modern world!  I actually rented Yankee Doodle Dandy from iTunes and watched in on my iPad with headphones.  A weird, yet rather pleasant experience