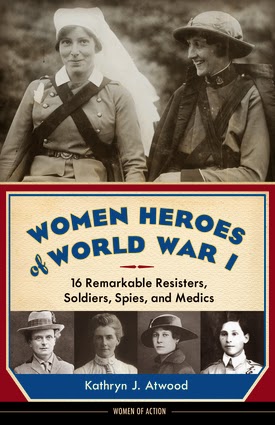 Today is the last day of Women's History Month for 2015 and because the theme this year is about Weaving the Stories of Women's Lives, I thought who better to turn to for today's post than Kathryn Atwood.  A few year ago, Atwood wrote a fascinating book called Women Heroes of World War II: 26 Stories of Espionage, Sabotage, Resistance and Rescue.  Now she has followed it up with a book about women heroes in World War I and once again, their stories are as amazing as they are compelling.

In Women Heroes of World War I, Atwood introduces the reader to some of the women, a few still in their teens, who decided to serve their country, despite the real dangers that they were to face.  Some became nurses, caring for the wounded as close to the front lines as they could get.  Others joined the resistance or became spies, some became soldiers fighting side by side with men, and still others were journalists, reporting events from the heart of the conflict.

Some of the women are familiar, like British born Edith Cavell who found herself in Belgium when the war started, director of a school of nursing there.  After the Germans invaded Belgium, hospitals were forbidden to care for any Allied soldiers that might find their to one of them.  Edith, ignoring the Germans, cared for wounded Germans soldiers openly, and for wounded Allied soldiers secretly.  And when these were healthy enough, she made such they had safe passage out of Belgium to the Netherlands.  Edith and her network can be credited for heroically getting a lot of Allied soldiers to safety before the getting caught by the Germans.  Her capture and punishment, which caused an uproar around the world, subsequently changed the way Germany handled women POWs at the insistence of the Kaiser.

One of my favorite stories is Helena Gleichen and her friend Nina Hollings, two ambulance drivers in Italy who sometimes found themselves driving through intense shelling to get wounded men to hospital.  Later, after training in Paris to become radiographers, they could be found driving around the Italian front with a portable x-ray machine.  With their x-ray skill, Helena and Nina were able to help the wounded in some surprising ways, for example, locating shrapnel lodged in areas that wouldn't have been found otherwise and bringing relief to the wounded man.  For their heroic work, the women were awarded the Most Excellent Order of the British Empire (the OBE).

My personal favorite is the story of Mary Roberts Rinehart.  Yes, I do mean the mystery writer.  Mary was also a journalist who wrote for the Saturday Evening Post and in 1915, she decided she wanted to go to Belgium.  After all, she had nursing experience and could report of the conditions of the hospitals there, but what she really wanted to do was experience the war as soldiers do.  Mary finally did get to see the front lines, including no man's land, and even managed to get an extensive interview with the King of Belgium.  Returning home she wrote her articles, but realized the war was going to last longer than anyone thought.

Women Heroes of World War I is a well-written, riveting book.  Atwood divides the women's experiences into four sections - Resisters and Spies, Medical Personnel, Soldiers, and Journalists.  The women profiled come from different countries, including the United States, France, Britain, Russia and each of their individual stories ends with a Learn More inset listing where to find more information them.  Atwood's extensive, intelligent research is evident in all the women's stories and she includes sidebars that give additional information about the women and the war.  Also included are an Introduction, an Epilogue and many, many photographs of war and the different women in it.  An extensive and useful Glossary and Bibliography, and well as a list of websites can also be found at the back of the book.

World War I was at first greeted with incredible enthusiasm, causing young men to unhesitatingly leave school, jobs, and families to join their countries armed services.  After all, no one thought it would last more than a few months.  Women were also eager to do their part and for some that meant being in the thick of the fighting, not working on the home front.  Women Heroes of World War I not only informs the reader about these now mostly forgotten women heroes, but pays homage to them and all the women who decided to do constructive for their warring countries.

I can't recommend Women Heroes of World War I highly enough, and what a wonderful book with which to end this year's Women History Month.