The Pilot and the Little Prince: The Life of Antoine de Saint-Exupéry written and illustrated by Peter Sis 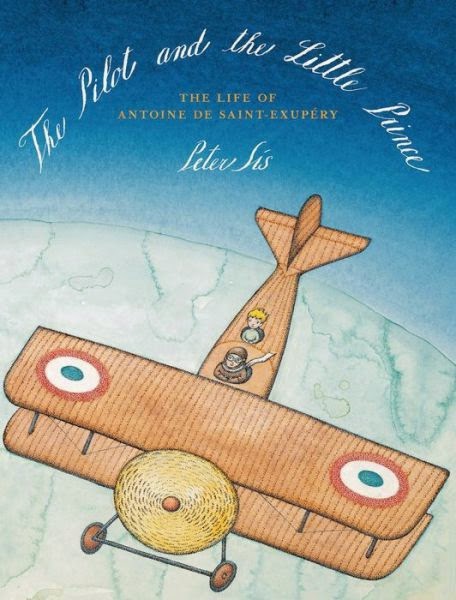 Last year was the 70th anniversary of the publication of The Little Prince by Antoine de Saint-Exupéry and in honor of that The Morgan Library in NYC had a special exhibition exploring the origins of this most famous of stories.  Having such an exhibit in NYC seems only fitting, since The Little Prince was written in New York while Saint-Exupéry was living here.  He had left his beloved France after it had fallen to the Nazis in June 1940.

While the exhibit was still running (unfortunately, it has ended), I went to hear Peter Sis speak about his new biography, The Pilot and the Little Prince: The Life of Antoine de Saint-Exupéry.  Sis begins this biography with information about Saint-Exuépry's early life and the beginnings of his passion for planes and flying.  Saint-Exupéry was born around the same time that flying was just getting off the ground - he was only three years old when the Wright brothers flew for the first time in Kitty Hawk, North Carolina.  A passion for planes and flying stayed with Saint-Exupéry and when he was 21, his mother finally agreed to pay for him to take flying lessons.

Sis follows Saint-Exupéry's career as a pioneer air mail pilot, delivering mail in Europe, West Africa and eventually South America, charting various routes for other pilots to follow, sometimes living on airfields in complete solitude, other times negotiating ransoms for pilots who had been shot down hostile nomads.  Those early days of aviation weren't easy.  Pilots had to battle through wind, rain, and storms, but aviation remained Saint-Exupéry's passion.

In 1936, Sis recounts, while trying to break a flying record, Saint-Exupéry and his mechanic crashed and almost died in the desert.  You may recall that the narrator of The Little Prince was a pilot who had also lived in solitude and then crashed in the Sahara Desert and it seems likely that the origins of The Little Prince come from this experience.  Not surprisingly, Saint-Exupéry had already began publishing his aviation stories as early as 1926.

When France went to war against Germany in September 1939, Saint-Exupéry naturally signed on to be as a pilot.  After France fell to the Germans, he and his wife traveled to the United States, which is when  Saint-Exupéry wrote the little prince while living in a lovely home on Long Island.  But after the tides of the war began to turn, he returned to Europe and began to fly missions out of North Africa, his last one was on July 31, 1944, when his plane disappeared into the sea near Corsica.

When Peter Sis creates a picture book, it is a feast for the eyes as well as the mind.  He has a way of telling a story using basically short, simple declarative sentences, which are sometime wrapped around an illustrations within an illustrations, and by the end of the story, you have been given so much more than you had expected.  And, I am happy to say, The Pilot and the Little Prince is no exception.

The book is designed so that the straightforward text is on the bottom of the page, as though it is earth-bound, while the stuff of dreams and passions reside in the skies above the earth bound narration: 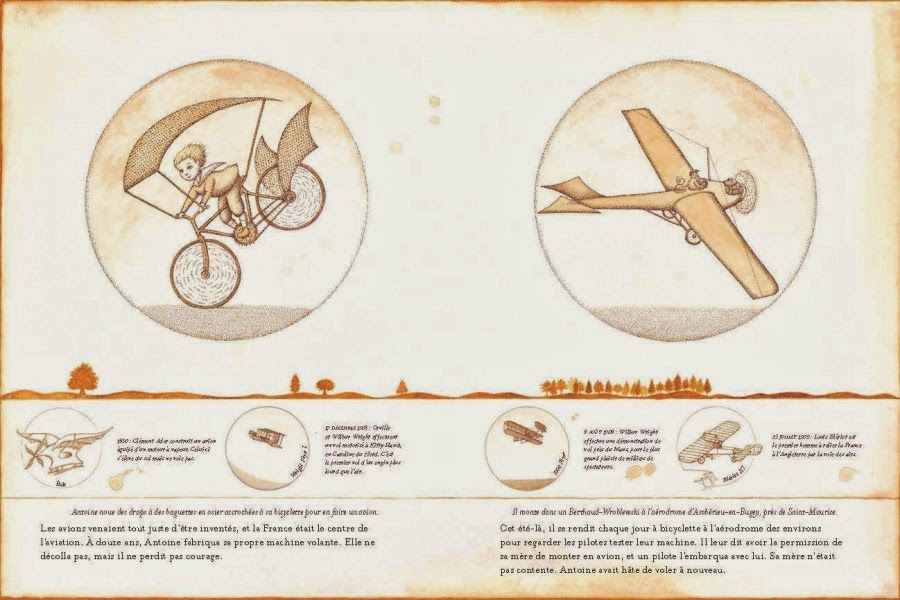 And as you explore the various illustrations depicting Saint-Exupéry's life on each page, you will no doubt recognize the references to The Little Prince - they may be subtle but they are definitely there.
About a third of the book is devoted to the war in Europe and I think this double spread of Saint-Exupéry's beloved France burning/bleeding from the invading Germans is one of the most poignant of Sis's illustrations.  You can almost feel how wounded and hurt Saint-Exupéry must have felt to see France fall into the hands of the enemy: 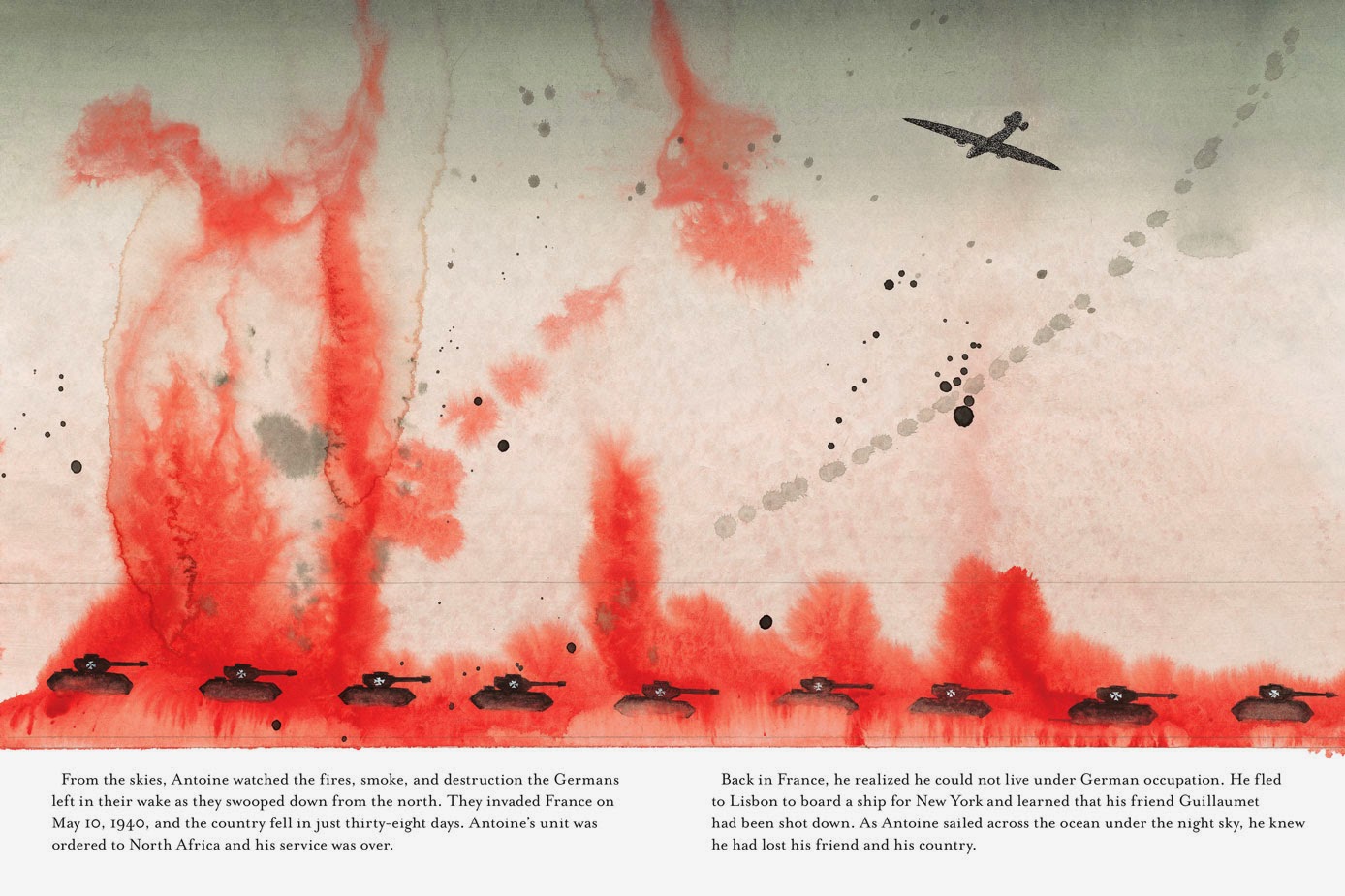 There are several other double page spreads that are just are incredible.  Like this one showing the lights in the submarine infested ocean that form a U-Boat as Saint Exupery and wife sail to New York, so simple, yet so eloquent: 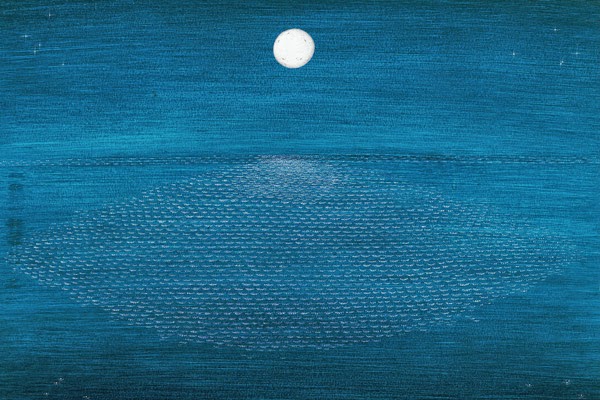 Or the one of stars forming the head of the little prince as a homesick Saint-Exupéry looks across the ocean towards France: 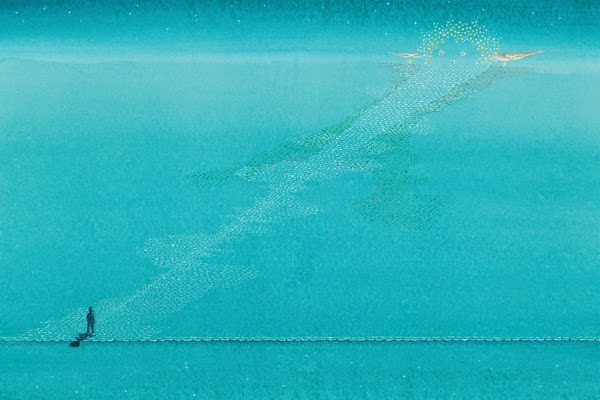 As always, Sis's illustrations are all just so spot on and exquisitely expressive.

A Teaching Guide to all of Peter Sis's books, including The Pilot and the Little Prince, is available as a PDF HERE