Under the Egg by Laura Marx Fitzgerald 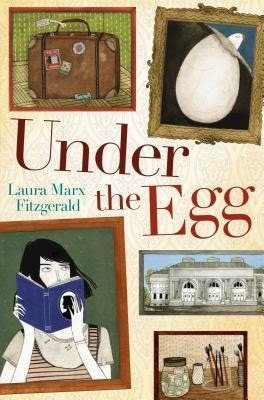 After her artist grandfather is struck and killed by a car, loner Theo Tenpenny, 13, is now even more alone in the world.  There's her mom, but mom is a bit unhinged and hasn't been there for Theo in years, staying in her room drinking expensive tea and working on theorems that will never be proven.  And the 200 year old Tenpenny house in Spinney Land in Manhattan is literally falling apart at the seams and although grandpa Jack's last words to Theo were that he had left her a treasure, and  to "look under the egg," up til now she had only found $463.00 in the house.  And to top that off, a letter from Veterans Affairs arrived, stating that Jack Tenpenny's monthly VA benefits were now terminated.

Things were not looking good for Theo.

Until the day some rubbing alcohol spills on her grandfather's painting of a suspended egg.  As the egg painting rubs off, suddenly, under the egg, another painting appears - one of a Madonna and Child, with a Latin inscription at the bottom - and it looks like it could be a genuine work of art from the Italian Renaissance.

Now, Theo is really worried.  Grandpa Jack had once worked at the Metropolitan Museum of Art as a security guard…in the European Paintings wing.  As hard as it is to believe it about her beloved grandfather, Theo can't help but wonder if he might have done the unthinkable.

But first things first.  So, Theo heads off to the library to find out what the Latin inscription says.  Along the way, a rain shower begins, and the owner of a diner calls her in out of the rain, and next thing Theo knows, there is a plate of hot meatloaf and potatoes in front of her - the first real food she's eaten in a long long time.  Not only that, but she strikes up a conversation with a girl about her age and the second thing Theo knows is she has just met her first real friend.  Bodhi is the wealthy daughter of two well known celebrities and lives in a completely renovated house, also on Spinney Lane.  The two girls couldn't be more opposite, and yet, more alike.

Suddenly, Theo's life has changed - no, not the financial part of her life, but the social part.  Jack carried grudges, and Theo was never allowed to speak to anyone on his list.  But with Jack gone, Theo finds that some of them are supportive adults who really like her and can help her solve the mystery of the Madonna and Child painting.  And, most surprising, Bodhi turns out to be a big help as well.

Together, Theo and Bodhi go on an adventure that will will include the Metropolitan Museum of Art; a little history of paintings from the Italian Renaissance; Nazi-occupied France; art stolen and hidden by the Nazis; and art uncovered and rescued by the Monuments Men; as well as modern ways of dating works of art; a bit about iconography found in works of art and, most important, how to survive in Manhattan when you have no money.

In the end, Theo and Bodhi solve the mystery of the painting, but will any of this change Theo's circumstances?

Theo is an interesting character.  She's creative, independent, intelligent, resourceful and she really knows her art history.  She has a lot of responsibility for a 13 year old, but handles it well.  To save money, she buys nothing that is not imperative.  After all, the streets of Manhattan are teeming with working castoffs, just there for the taking.  And she has a limited garden, egg laying chickens and Theo has learned the fine art of canning and pickling.

Best of all, Theo isn't a perfect character.  She wants to find out about the painting in the hope of selling it and alleviating some of her money woes.  So, maybe she really doesn't want to find out too much about the painting.  And she even gets annoyed and avoids her new best friend for these totally selfish reasons.

I really liked Under the Egg, especially the friendship that developed between Theo and Bodhi.  They make a great team, most of the time.  Despite her wealth, Bodhi is also a pretty down to earth kid, but has as much to learn from Theo and Theo did from Bodhi.  It is a friendship that you know will last for years to come.

Fitzgerald has also included lots of art history in Theo's story without overdoing it and without sounding teachy.  It will most likely be read by the same readers who loved E.L Konigsburg's From the Mixed Up Files of Mrs. Basil E. Frankweiler, and who knows, it may even inspire an art museum visit (From the Mixed Up Files was the book that sparked my Kiddo's first of many visits to the Met).

For young readers who like a a fun novel, a good mystery and well-developed characters, Under the Egg should definitely please them.

But that's not all:
Look under Resources on Laura Marx Fitzgerald's website for information on all things Under the Egg, including information on the painter Raphael (yes, he's in the book, too),  and information on WWII, stolen art and the Monuments Men.

But, wait there's more:
Look under Discussion Guide for help on themes and issues designed around the Common Core standards for grades 5-7.

And yet, still more:
Look under Life with Theo, and you can also find a map of her Greenwich Village neighborhood, out how to pickle beets, which I will definitely try, or how make a sweater purse like Theo's, (um, more my Kiddo's style).