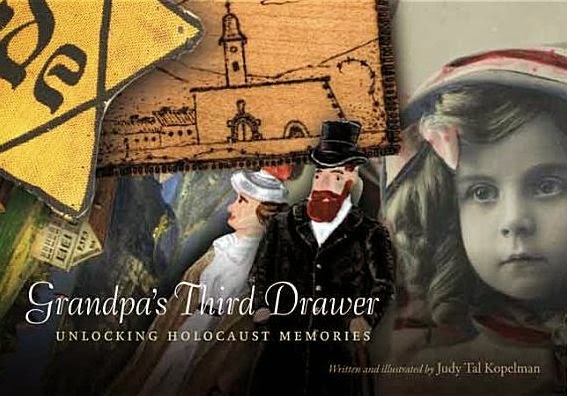 Young Uri loves to visit his grandparents.  He sees his vacations there as a quiet respite from the daily routines and annoyances of life at home, especially his nagging sister.  Grandpa Yuda always has time to play with him, and Grandma Genia loves to pamper him with hot chocolate and homemade cookies.

But Uri's favorite spot in his grandparent's home is Grandpa Yuda's study.  In the study, Uri tells the reader, his Grandpa has a desk with three drawers and he is allowed to keep his pencil case and crayons in the first drawer.   Grandpa  keeps all kinds of little toys he used to play with when he was a boy before the war in the second drawer, and now, he lets Uri play with them.  But the third drawer is always kept locked.  No one, not even Uri, is allowed to open it and Grandpa never talks about what's inside.

Naturally, Uri can't help but wonder about that third drawer - what's in there and why it is a secret.

Then, one cold, rainy winter day, Uri finds himself home alone for a little while and decides to color.  He goes into Grandpa's study to get his crayons, and there in the first drawer is a key, one he is certain would open the third drawer.

Sure enough, when he puts the key into the keyhole and turns it, the drawer opens.  But just then, Grandpa Yuda walks into the room and catches him holding a yellow star with a safety pin, just one of the things Uri found in the drawer.   At first, Grandpa is angry at Uri, but then he decides to tell him about the contents of the locked drawer.

Grandpa tells Uri about being sent to live in a ghetto with his parents and sister Anna, about how hungry he was there, because they were allowed so little food with their ration stamps.  In the drawer, is the doll his mother made for Anna from rags, and the dominoes he made himself from wooden scraps while in the ghetto.

And he tells Uri about the day his family was separated by the Nazis, never to be seen again.   His grandparents were sent to a concentrations camp, while his sister and parents sent somewhere else on trains.  Grandpa Yuda was sent to a labor camp.

Uri tells us they stayed up late that night talking about these events and even afterwards, Uri had lots of questions which Grandpa always took the time to answer while they played with the homemade wooden dominoes.

The Holocaust is a delicate subject and it is hard to know when to talk to young children about it.  For the children, grandchildren and now even the great grandchildren of survivors, that may happen sooner than for other kids, because they may hear things being said, or noticed the number on a grandparent's arm.

Whatever your reasons for starting a conversation about the Holocaust with a younger child, this gentlest of stories would be an ideal way to begin, just as Uri's Grandpa did.  As Grandpa explains what happened to his family, he keeps the focus on his them and not on the Nazis.

The story is told in clear, simple language, and enough details are given for a child to understand what happened to Grandpa's and his family without becoming too graphic to frighten.  This focus on Uri's family history also helps him to feel more connected to them and his Grandfather and is more emotionally age appropriate for a child around Uri's age (which is probably 6 or &).  Details of Nazi atrocities will come later in Uri's life, when he can emotionally handle them better.

Grandpa's Third Drawer was originally published in Israel in 2003, where it won the Ze'ev Prize for Children's Literature.  It is newly translated picture book has now been published for young readers in English.  The artifacts and illustrations used by Kopelman were used courtesy of Beit Theresienstadt Archives, in Givat-Haim Ichud, Israel.

This book is recommended for readers age 6+
This book was an eARC received from Edelweiss
Posted by Alex at 9:22 AM