Stay Where You Are & Then Leave by John Boyne 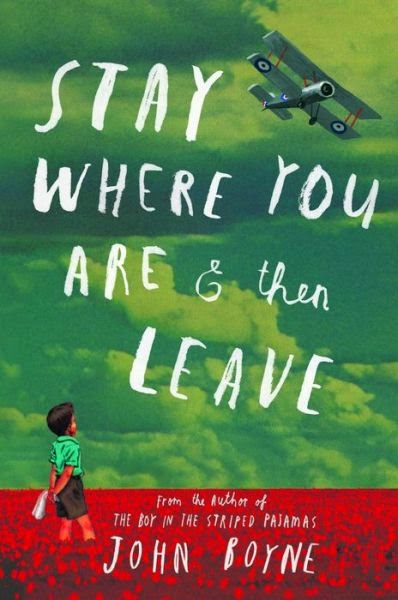 For Alfie Summerfield, the first five years of his life had been grand.  He was a happy little boy, and his dad and mum were happy with each other and with him.  His father, Georgie Summerfield, delivered milk and drove a milk float every morning pulled by a horse name Mr. Asquith.  It was Alfie's dream to some day be big enough to ride along side his dad and help.  Alfie's Granny Summerfield, who lived right across the street, always liked to come around for a bit of a gossip.  And Alfie had a best friend, Kalena Janáček, whose father came from Prague and ran the sweet shop.

But all this changed on Alfie's fifth birthday, because on July 29, 1914, World War I officially began and a few days later England joined in.   And even though he promised he wouldn't, Alfie's father immediately enlisted anyway.  Then, Mr. Janáček's store windows were broken and someone wrote on the shop door "No Spies Here!"  Soon enough, the government came and took father and daughter away to an internment camp on the Isle of Man.

At first, letters from Alfie's father arrive regularly, but then they begin to dwindle down and down and after two years, no more letters arrive.  Alfie's mum tells her son it is because his dad is on a secret mission for the government.  But times get hard and Mrs. Summerfield, who already takes in laundry, becomes a Queen's Nurse, which means most of the time Alfie is on his own.  And so, he decides it is time to do his bit.  He steals Mr. Janáček's prized shoe shine box, walks over to King's Cross Station and begins shining shoes three days a week (Alfie still attends school two days a week).

Then one day, almost four years after the war began, something amazing happens.  While shining the shoes of a doctor, the papers he is reading get blown out of his hands.   As he and Alfie scurry around King's Cross to retrieval the papers, Alfie discovers on one of them that his dad is alive and is in a hospital, the same one the doctor works at.  From that point on, Alfie decides that he is going to go get his dad and bring him home.  He is convinced that all that his dad really needs is to come home to recuperate and soon things will be happy again, just like they were before the war.  But on his first trip to the hospital, Alfie is not prepared for what he discovers.

Alfie is one of those quirky characters that Boyne seemed to write so well.  He reminded me a little bit of Barnaby Brocket (The Terrible Thing that Happened to Barnaby Brocket) and he was certainly a more realistic 9 year old than was Bruno in The Boy in the Striped Pajamas.  It felt as though Boyne's third boy protagonist has more depth and is a more well developed character than the other two.

Georgie Summerfield is not a well developed as Alfie, but he in interesting nevertheless.   Georgie has the same blind enthusiasm for the war that so many young men had when it first began. The war, the government told them, would be over by Christmas, but by jingo, they didn't say which Christmas and four years later, the reader sees how Georgie's enthusiasm has spiraled down as he lives the realities of the trenches and then suffers the consequences of the enthusiasm.

I did think that the first three quarters of the novel did a really good job of presenting life during World War I on the home front, rather than the trenches, although there is some of that in Georgie's letters home.  The last quarter became a little preposterous, and the end a little predictable, but I thought other things made up for that.

Boyne addresses two issues in Stay Where You Are & Then Leave.  The first is that of conscientious objectors.  As enthusiastic as Georgie was to get into the war, his best friend Joe Patience feels just as strongly about not wanting to fight.  Joe is a compassionate person, who strongly believed that he was not put on earth to kill anyone cost him dearly - loss of lifetime friends, jail time, and beatings.  Boyne delicately presents it all at the same time as making the reader understand Joe's position.

The other issue is that of shell shock or Post Traumatic Stress Disorder (PTSD) as it is called nowadays.  In the novel, the reader sees how skeptical people were about shell shock, believing it to be more cowardice than illness, until it hit home personally for them.  On Alfie's two visits to the hospital his dad is in, as he goes through the wards looking for him, Boyne gives us a very clear picture of what shell shock can do the a person's mind.  I think this part of the story will resonate with many of today's children whose loved one returned from Iraq or Afghanistan suffering from PTSD.

Though somewhat flawed, this is a nice book for anyone who is interested in historical fiction, and especially the impact of WWI on the people left at home.  And yes, you will discover the meaning of the title if you read the book.

A person who drives a milk float delivers milk to customers and in 1914 would be delivering it is something that looks like this:

This is my World War I book for my 2014 War Challenge with a Twist hosted by War Through the Generations.
This is book 6 of my 2014 Historical Fiction Reading Challenge hosted by Historical Tapestry
Posted by Alex at 8:37 AM