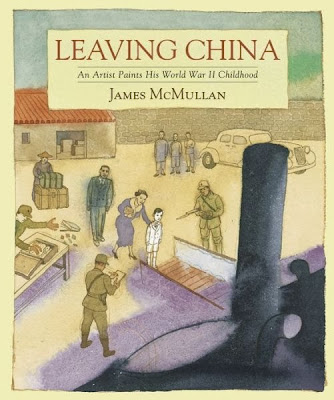 When James McMullan's grandparents, James and Lily McMullan arrived in China in 1888, it was with the intention of doing missionary work among the Chinese people in Cheefoo in the Shantung Peninsula (now called Yantai, in Shandong province).  But it didn't take long for that to change.  When they discovered that poor, destitute and hungry families would leave their baby girls to die rather than feeding them, they began saving them and raising them, soon building an orphanage and school for the growing girls.  The girls learned to speak English and how to do cutwork embroidery and before long, the McMullans had quite a busy commercial enterprise going.

Into this were born their own four children, who were raised in China, but sent abroad for further education.  The youngest son, James, studied music in Vancouver, Canada and married a Canadian girl named Rose.  James returned to China with Rose and in 1934, James McMullan Jr. was born.

Life was pretty good for the family, until one day the tortured dead body of a Chinese man washes up on the beach and young James begins to understand the fear and dread that has been underlying life in China since 1931.  Then, in 1937, the Japanese Army arrived in Cheefoo and life changed.  Road blocks were set up and anyone without papers suddenly faced an uncertain future.  And worse still, anyone without proof of having been inoculated against Cholera, was injected on the spot with the same needle used for everyone else.

By 1941, it is decided James and his mother would leave China, though his father is not allowed to go and instead enlists in the British Army.  Leaving China begins a round the world journey that will take James from Cheefoo (Yantai) to Shanghai to Western Canada, New York, Bombay (now Mumbai), Srinigar, Darjeeling, Calcutta (now Kolkata), Chungking (now Chonqing) , Shanghai and back to Western Canada, all while still a child.

James only saw his father once during the war, in Darjeeling, India when he was about to be enrolled in St. Paul's School there  It wasn't a good visit and sadly, James Sr. was later killed in a air crash.

Leaving China is certainly a different kind of memoir.  It is really a series of 54 one page memories with a corresponding illustration of the facing page.  The memories are simple and personal, yet they tell a story not only about James McMullan's life but they also give a picture of what life was like in China during the 1930s and early 1940s.

Like the memories, the full page painted illustrations are simple, yet have a quality that goes much deeper than the actual picture.  I wasn't surprised to recognize the artwork since I have been looking at Jame McMullan's wonderful Lincoln Center theater posters for years now.  McMullan wrote that for Leaving China, he wanted to catch the dream-like quality his memories held for him and in that respect, he has certainly succeeded.

As a memoir with a difference, this is certainly one that many readers will appreciate.  Don't be fooled into thinking that because there are so many illustrations, this is a children's picture book.  It is definitely  a book for older readers, and a wonderful supplement for anyone interested in Chinese history and/or World War II.

This is book 15 of my 2013 Historical Fiction Reading Challenge hosted by Historical Tapestry
Posted by Alex at 11:41 AM