The Victory Garden by Lee Kochenderfer 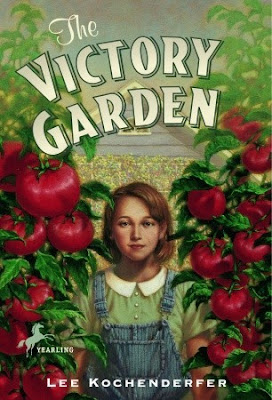 It is spring 1943 and for 11 year old Teresa Marks the war has turned personal - her beloved older brother Jeff was off in Europe flying B-24s, a dream come true for him, but not for her.  It is also time for planting the annual Victory Garden and resurrecting the annual competition for best tomatoes with the Markses curmudgeony neighbor Tom Burt.  But just as the planting and competition gets underway, Tom Burt is seriously injured in a tractor accident and must spend the summer in the hospital.

Rather than plow his entire garden under, and knowing it is his pride and joy, Teresa suggests that one of the ways her class can raise money for the schools war bond competition would be to take over Tom Burt's garden and sell the produce.  No one is more pleased than Teresa when six kids volunteer, even if the new kid, troublemaker Billy Riggs, thinks it's a bad idea.

The kids, called the Young Sprouts by the local newspaper, work hard on the Tom Burt's Victory Garden.  But one morning, Teresa wakes up to a trampled garden and a broken St. Francis statue belonging to the very gentle Mrs. Burt.  Naturally, she is convinced that Billy Riggs did it to spite the Young Sprouts.

At the same time, Tom Burt's big dog Wolf goes missing from the relatives who are caring for him during his master's hospital stay.  The police seem to believe the dog will make its way home and sure enough, one day Teresa finds the dog under the Burt's porch with Billy Riggs.  Dirty and badly injured, Billy had been trying to help the frightened animal.  Together, they nurse Wolf, but when Teresa notices a piece of the broken statue lodged in the dogs side, she think that Billy Riggs may have had nothing to do with the trampled garden after all.

Throughout the summer, as the kids work hard in the garden and at selling their produce, Billy comes and goes, each time offering advice and help to Teresa while avoiding the other kids.  Pretty soon, Teresa begins to think of him as a friend, but then he disappears along with his alcoholic father, their run down house closed and deserted.

And Teresa is surprised to realize how much she misses him.

The Victory Garden is an interesting novel.  It is a real slice of life, coming of age story.  Teresa talks about reading Life magazine and that is exactly how this novel feels - like a story out of Life about how communities are coping with the war.  Which may be why it has such an 'in the middle of things' feeling to it, and not just because it is directed at middle grade readers.  It is set in the middle of Kansas, in the middle of the US, in the middle of the war and, with the exception of Billy Riggs, among very middle class people.  Days pass, vegetable grow, and small town Kansas begins to feel almost idyllic in the midst of war.  And yet, in the midst of all that middleness, the Young Sprouts are learning some very valuable lessons and some painful truths about life.  Especially Teresa, who was very happy believing she knows how to keep bad things away - like as long as she uses her 'secret weapon' on the tomatoes they will be big and juicy and award winning just the way her brother liked them, and that as long as her brother is in the air in his B-24, he will be safe, and that planting a victory garden will help win the war and bring everyone home safely.

But can Teresa learn that magical thinking doesn't actually work in the middle real life?

Teresa was right in thinking that a victory garden could help win the war.  Victory gardens were a very important part of life on the home front.  These gardens began to appear everywhere there was room to plant - back yards, allotments, public lands, rooftops and in England, there were even gardens planted in bomb craters (see my post Victory through Vegetables: Woolton Pie).  The American, British and German governments all encouraged citizens to grow their own food to supplement their food supply during rationing and to allow more food to be sent to their troops.  And it victory gardens turned out to have an unexpected benefit to folks on the home front - it brought them together as a community, just as it does in The Victory Garden.