From the Archives #23: Biggles Defies the Swastika by Captain W.E. Johns 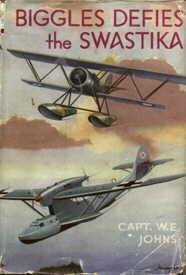 Not long ago I reviewed a book by John Boyne on my blog Randomly Reading called The Terrible Thing that Happened to Barnaby Brocket.  This was a really good fantasy novel about a boy who floats and must be weighed down to stay on the ground.  Barnaby has a dog named Capt. W.E. Johns, which caused me to laugh when I read that.  There is no explanation why that is the dog's name, but I (and others, I am sure) know exactly who Johns is.

Captain W.E. Johns was a very prolific writer with 169 books to his credit.  But he is probably best known for two of his series books: 96 'Biggles' books for boys and 11 'Worrals' books for girls.  Worrals, or Joan Worralson, flies for the Women's Auxiliary Air Force, part of the RAF.  I reviewed Worrals of the W.A.A.F in 2011.  Biggles, or James Bigglesworth, learned to fly in World War I and continued flying right into World War II and beyond.

Biggles Defies the Swastika (#22 in the series and written in 1941), begins in April 1940.  A Major with the RAF, Biggles has been doing some work in Oslo when he wakes up one morning to discover that the Nazis have invaded Norway.  Fortunately, Biggles has false identity papers naming him as Sven Hendrik, allowing him to pass as a Norwegian who supports the Nazis until he can get to his plane and out of Norway.  Arriving at the aerodome in Boda on a stolen Nazi motorcycle, Biggles finds it is under Nazi control now.  Somehow, Biggles fools the Germans into thinking he is a quisling who speaks fluent German and is made a leutnant on the spot by the German commandant there.  Now under a safe cover, Biggles gets himself to the Swedish border on a his stolen motorcycle and crosses over to safety.

But not for long.  At the British Consul, he is told to return to Norway to do some ntelligence spying and that his friends and fellow fliers Ginger and Algy will contact him as soon as possible.  Back in Norway, he hears that the Germans are looking for a British pilot named Bigglesworth who was spotted in Oslo and wanted by the Germans.  Luckily, as Sven Hendrik, Biggles is ordered to look for himself and given a Gestapo pass that will allow him freedom to get around without question.

Biggles soon discovers that his old nemesis Oberleutnant Erich von Stalhein is in Norway and is desperate to capture him.  Biggles calls Gestapo headquarters and tells them he has information that Bigglesworth is in Narvik and he is on his way there.  But along the way, he runs into some captured British sailors.  He tells them he's really a British pilot and concocts a plan for them to tell their captors that they saw Bigglesworth escape.  In Narvik, Biggles finds other British POWs, including his old friend Algy, who was sent over to help him.  He manages to free all the prisoners, but is then ordered back to Boda Aerodome to be questioned by von Stalhein.

Before that can happen, Biggles is ordered to Stavanger airfield by the British to gather intelligence about Nazi defenses there and then to go to Fjord 21, where he runs into his other old friend Ginger.  It is time to get out of Norway now that they have the needed intelligence, but Biggles refuse to go with Algy.  Meanwhile, Algy, after being freed at Narvik has returned to Boda to find Biggles.

Biggles returns to Boda, finds Algy and they make their way to Fjord 21, Ginger in his plane and escape, only to find that the Fjord is now occupied by Nazis and that Ginger is missing.  But not for long. Ginger tries to rescue Biggles and Algy, but things go wrong and Algy is again captured by the Nazis.  Biggles, with the help of his Gestapo pass, learns that the British warships are sailing right into a trap.  He can do nothing about it though because of growing suspicion about who he really is.  He accepts a ride in a water plane back to Boda and von Stalhein, because he has no choice.  During the flight, Biggles overtakes the pilot.  Flying low enough for the German to jump into the water, Biggles orders him out, but not before telling him they must get together after the war and have dinner together (yes, he really did say that).

Now flying a German plane, Biggles is attacked by none other than Ginger.  But then Ginger is attacked by a German plane and goes down.  Luckily, Biggles is able to rescue Ginger, tells him about the trap the British warships are heading into and has Ginger drop him off to find Algy.  Ginger delivers his warning, sets off to find Biggles and Algy, but is captured by the Germans.  Meanwhile, Bigglesand Algy are also captured by von Stalhein at Boda.  But when Ginger arrives with his German captor, the three of them manage to overpower him, steal a German plane and fly safely off to England and further adventures - lots of them!

All this action/adventure tokes place in only a few days.  The back and forth between Oslo, Boda and Stavanger were a bit like watching a ping pong games with airplanes, but I never got confused, in part because of the simplicity of the writing.  It is not great literature, is sometimes politically incorrect and everyone smokes, but Johns seems to have understood his young readers.  There is just action, constant movement, and a feeling of being in control, something young readers probably found comforting in wartime Britain.

If you are going to read them for the first time, don't take them too seriously, just have some fun, after all, they feel a bit campy nowadays.  And I thought the rivalry between Biggles and von Stalhein had shades of the later rivalry between Snoopy and the Red Baron.  I did, however, learn that anti aircraft flak was refered to as archie, as in 'you will probably run into lots of archie when you fly a German Dornier over Britain.'

While I have read most of the Worrals books, I seem to only have Biggle Defies the Swastika - but I have two copies of it, somehow.  And both smell like they just came out of my gram's attic.  Luckily, since Biggles is still somewhat popular, now editions of his books have become available recently, for your reading pleasure.

Biggles has has lots of influence on people's lives.  Here are some examples:
A Life of Biggles by Hilary Mantal
I Longed to Fly with Biggles by John Crace
Good Eggs and Malted Milk: Has Biggles Stood the Test of Time by Giles Foden

More information on Biggles and his creator Captain W. E. Johns can be found Collecting Books and Magazines (a great site for all kinds of information about kids books from the past.

Email ThisBlogThis!Share to TwitterShare to FacebookShare to Pinterest
Labels: Aviation, From the Archives, Norway, Series Books