His Name was Raoul Wallenberg - an interview with Louise Borden

Today I am very pleased and honored to welcome Louise Borden to Randomly Reading and The Children's War.  Louise and her book His Name was Raoul Wallenberg have been named winner of the 2013 Sydney Taylor Book Award for Older Readers by the Association of Jewish Libraries.  The Sydney Taylor Book Awards are given annually to those outstanding works that authentically portray the Jewish experience.

Louise, can you tell us what being awarded the 2013 Sydney Taylor Book Award means to you?

It's quite an honor and was totally unexpected.  But I'm thrilled to think that other felt that my research and writing about Raoul was worthy of this wonderful award.  Awards are not my focus when I'm alone at my desk typing away but I think this one means that those on the committee believe in me and in the importance of Raoul Wallenberg's life story.  It is quite affirming and something I will carry into the future on the touch days when I'm staring down at a blank page.  Winning this award will not make writing easier but I'll think of my encouragers, and of Sydney Taylor, cheering me on.

You have written on a variety of subjects, but you keep returning to stories about World War II in both fiction and non-fiction - The Little Ships, Across the Blue Pacific, The Greatest Skating Race, The Journey that Saved Curious George, and now His Name was Raoul Wallenberg.  Can you tell us what inspired you to write about Raoul Wallenberg?

I'd never heard of Raoul Wallenberg even though I studied history in college.  It wasn't until the 1980s that I read about him, and the mystery of his disappearance.  I was drawn to his character, his moral compass, his Swedish background, and his American education in architecture.  I'm not Jewish but I've read about the Holocaust and care deeply that we must always remember those who were lost and educate future generations.  I didn't know much about the events in Hungary until I started on my long path of research.  I hope that young readers will find Raoul Wallenberg's story and his actions (and those of other brave diplomats in Budapest) as compelling as I did.  Raoul and his colleagues are my life heroes.  What if they had stood by and done nothing during those dark days?

I know you have written books in free verse before, and it seems to be a form that is becoming more and more popular in both fiction and non-fiction.  Yet, when I read Raoul Wallenberg's story I was amazed at how much information you were able to convey without resorting to prose.  Can you tell us what prompted you to chose this form over prose?

All of my books are written in this style.  Sea Clocks and The Journey that Saved Curious George were subjects that also involved gathering a lot of complicated information and then making events and places and people accessible to today's young readers.  It took me two years to write the text about Raoul Wallenberg, shaping the structure and doing constant revision.  I wanted the power of his story to shine through and not have my readers get lost in dense paragraphs of dry writing. 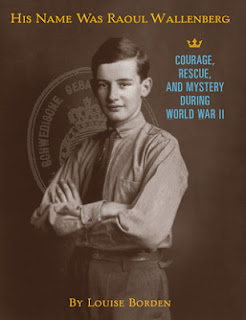 I know historical fiction and non-fiction require a lot of research.  Could you tell us a little about the research process you used and any challenges you faced while writing His Name was Raoul Wallenberg?

His life is a complex story with an unknown ending, clouded by contradictions.  First I had to immerse myself in reading deeply and widely, sifting through inaccuracies that have been stated in various books  over the years.  I tried to use primary sources whenever possible.  Meeting with his family was very important, hearing their voices and recollections.  I went to Stockholm three times and Budapest twice - on my own nickel and perseverance.  That was a financial challenge!  The Wallenberg story was my "beautiful obsession".   You have to have a deep commitment to last through years of research.  I had three editors...so the book's structure changed and evolved.  I began these steps before Google was such a helpful presence to researchers.  Attending a Raoul Wallenberg Symposium in Budapest was also very helpful.  Andy Nagy helped me translate sections of some Hungarian books.  Gathering the photos was a challenge.  I think that this book contains more photos than any other book about Raoul Wallenberg.  I wanted kids to know that the players in the story looked like, and what the places looked like.  To them, World War II was lived in black and white...I want them to know that it was lived in color.

After reading His Name was Raoul Wallenberg, the thing that struck me the most was how you presented him as a real person and not just another distant historical figure.  For example, I love that you included information about Raoul's childhood and teen years.  The class picture you open with is priceless, as is the invitation to readers to also become a storyteller of his life.  As storytellers, what do you hope your young readers will take away from this book?

When I saw the school photo (that had never before appeared in a book). I knew that it was the key to finding the right place to begin such a complicated story.  Finding the right voice is always my quest.  I hoped that this photo )and that signature) would bring kinds immediately into Raoul's life.   I try to choose the most essential details - the ones that will connect with kids.  I gathered these from interviews regarding his childhood and teen years.  I'm 63 years old.  Young readers have much longer lives ahead of them.  I want them to be inspired by this man and by his character and actions.  I want kids to know that they too can make a positive difference in the world.  I want them to find their own heroes.  And I want readers to remember Raoul Wallenberg and to carry his story into their own futures.  We are all storytellers - kids will remember a great story and I hope they will tell others and use its power for good in their own lives.


One of the topics of WW2 that I have always hoped to see a kids book about are the Jewish Partisans, like the Bielski Partisans.  That being said, what particular ideas set the writing process in motion for you?  Do you have a current writing project and is there any future project of a historical nature that you would like to write about?

I've had about 26 books published.  More are fiction than nonfiction.  But in most I tend to focus on ordinary characters who do extraordinary things.  Courage, friendship, helping others, heroes, changing the world in a wonderful way - you will find these in the pages of my books.  I write about people who inspire me.

The Greatest Skating Race was entirely fictional but rooted in an authentic setting.  I wanted to write about that part of the world in wartime.  I wrote the fictional The Little Ships because I found the event of the Dunkirk rescue so dramatic.  When a person or place or event calls to me in a deep way, that is when I embark on writing about it - either fictionally or via nonfiction.  Along the way, I have met amazing people, and through my books I have made lifelong friends in other countries.  I've just finished a fictional book set in Italy during WW2.  And I went to France last September to see some places I've been researching for two years - another WW2 story.  Both of these books are, again, about the courage of ordinary people.  Long ago in college my senior research project focused on the European Response to Hitler/Resistance movements in WW2 in France, Holland, Denmark and Germany.  I'm sure your interest in the Bielski Partisans is founded in part on their extraordinary courage.  World War 2 affected millions upon millions.  Each had their own individual story.  Perhaps that is why you and I both find this tragic time so compelling.
When I finish my work-in-progress French story, I have yet another idea I am pursuing via research.  I gather books, etc and they sit on the back of my writing stove.  Then when I'm ready, I start a project.  I intersperse my WW2 books with books for younger kids.  Kindergarten Luck is such a book, that will be published by Chronicle.  Baseball is...will be published by S&S next year.

Thank you so much, Louise, for taking the time to visit Randomly Reading and for all the insights you have given us into your writing process.  I wish you all the best in the future.

This interview also appears on my other blog Randomly Reading

Please be sure to visit these other stops on the 2013 Sydney Taylor Book Award blog tour:

Doreen Rappaport, author of Beyond Courage: The Untold Story of Jewish Resistance During the Holocaust
Sydney Taylor Honor Award in the Teen Readers Category
At Bildungsroman