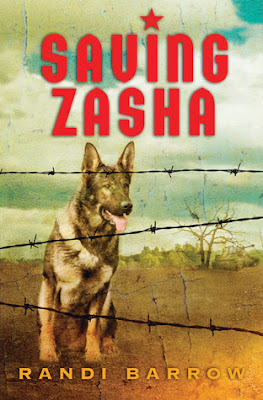 Even though the war is over, conditions are still difficult in Russia and if you are a dog, especially a German Shepard, things are downright dangerous.  It is hard to believe tha in a country that no longer has any dogs left because of the war, German dogs, are nevertheless. killed immediately.  After all, Germany started the war and Russians still hate them so much they even hate their dogs.  So imagine the fear and awe13 year old Mikhail feels when he finds a severely wounded soldier with the most beautiful, obedient German Shepard he has ever seen and with whom he immediately falls in love.

Mikhail helps the soldier home, but despite all his mother's efforts, the man dies.  Mikhail, his mother, sister Rina, 9, and older brother Nicolai, 15, take the man's body to the police to report his death, but now the question is what to do with Zasha, the dog?

Well, by now all three kids are in love with her, and even their mother has some affection for the beautiful dog and so it is decided that they will keep Zasha, but make sure she is well hidden from prying eyes.  Still, despite their best efforts, two people suspect the family of having a dog.  Katia, a not well liked by him classmate of Mikhail, is the first to come around snooping.  Under the pretext that she is helping out on her father's newspaper, Katia is rather desperate to discover the hidden dog.  In her zeal, Katia tells the brothers about a man not far away who is trying to start a dog kennel at the abandoned Orlov farm.

Intrigued, the boys sneak over to the farm and discover what Katia said was true.  The army has assigned one of their soldiers, Dimitri, to start trying to breed a "superdog" that could be used for both work and the military.  Unfortunately, all Dimitri has to work with in creating this "superdog" is a bunch of ragtag dogs that are anything but super.  Wouldn't he just love to have Zasha?  Thanks to Katia who had already told him her suspicions, Dimitri's hopes are confirmed when he sees the boys have German Shepard dog hairs all over their clothing..  And added to Katia and Dimitri's desire to discover Zasha are the two dangerously desperate dog thieves that show up on the farm to search for Zasha because there is lots of money to be made if you have dogs to sell.

On top of all this, it turns out Zasha may be even more valuable than originally thought when it is discovered that she is pregnant.  Will the family be able to keep Zasha and her pups safe and out of the hands of all those who want her for their own purposes?

Saving Zasha has all the makings of an exciting, nail-biting adventure story for any reader who likes good historical fiction and/or a great dog story.   It is a finely wrought debut novel for Randi Barrow and she has created a realistic situation and characters in a book that is sure to win over many middle grade readers.

Barrow writes at the end of the novel that by the end of World War II there was a shortage of dogs because so many were used during the war and didn't survive.  Indeed, at one part in the novel, Mikhail's mother's explains how they were used.  When the war ended, the army really did set about creating a kind of superdog called the Black Russian Terrier.  Be sure to read this part of the book.

The prequel, Finding Zasha, has just been released and is said to be just as exciting as Saving Zasha and may even answer a few of the questions about Zasha's past that you might have if you have already read Saving Zasha.  I hope!

This book is recommended for readers age 9-12
This book was borrowed from the Children's Center branch of the NYPL
Posted by Alex at 10:12 AM