Truce: the Day the Soldiers Stopped Fighting by Jim Murphy 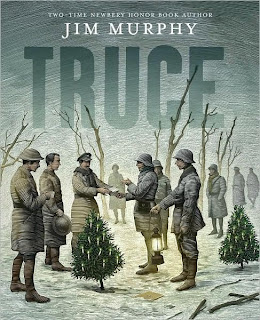 Truce is a wonderful book that not only tells the story of the unofficial Christmas Truce of 1914 during World War I, but also gives a coherent, thorough history of the events leading up to the hostilities and just what those terrible first months of war was like in the trenches.

The fact is that most of us don't really remember World War I from our high school history days.  And I know I never learned that World War I could have and almost was prevented.  So I can honestly say that I (re)learned a lot reading Truce.  Jim Murphy has a real gift for explaining history in his well-researched, totally accessible book about how the enemy soldiers stopped fighting in the middle of a war and celebrated Christmas together.  And as he points out, the truce wasn't quite as spontaneous as we have been led to believe.

Murphy explains that there are two sides to trench warfare - the fighting side and the boring side.  The fighting side was basically barbaric, with soldiers charging across a No Man's Land towards the enemy and the enemy mowing them down with all kinds of artillery, including machine guns.  The boring side was waiting in the trenches for the next charge or counter charge.  But, although carnage was taking place on the battlefield, newspapers were publishing stories about victory, causing enlistment offices to be packed with men want to enlist.

The fighting was horrible as were the conditions in the trenches.  The soldiers were plagued not only by bullets and grenades, but also by  "nonmiliitary dangers," like swarms of hungry rats, lice and fleas in their clothing, bedding and food.  And sometimes these can be just a bad.

But sometimes, Murphy writes, when it was quite the soldiers of one side could hear the soldiers on the other side talking, singing, playing music.  Then they began to contact each other from across No Man's Land, exchanging greetings, remarks, even food.

And so, when Christmas came and the men received cards and parcels from home, on both sides of No Man's Land, they were feeling mellow and friendly.  The rest is history...

While the main focus of Truce is on the events leading up to war and the truce of Christmas 1914, Murphy also includes a brief history of the rest of the war and the subsequent conditions Germany was subjected to when they surrendered.  Murphy has written a nicely detailed, well-rounded history, just graphic enough for the intended middle grade reader.  It will hold their interest without turning them off.  Truce is very well documented, and includes maps, photographs, a timeline, notes and sources - in other words, all those things that make an informational text really creditable and user-friendly.    I particularly liked the list of books, poetry, movies and websites where the reader can go to learn more about World War I.

One of the things I have always wondered about was why the unofficial Christmas Truce of 1914 during World War I has become the subject for lots of fiction.  Well, I found my answer in this well-researched, well-written book.  The Western Front was a lot longer than I had ever imagined - two parallel trenches ran 475 miles from the North Sea to the Swiss border, separated by a No Man's Land tangled up with barbed wire.  On the eastern side of the front was the German trench, on the western side were the Allied troops from Britain, France and Belgium.  475 miles means that not everyone could have experienced the truce in the same way, leaving it wide open to the imagination.

What a great book!

This is book 4 of my World War I Reading Challenge hosted by War Through the Generations.