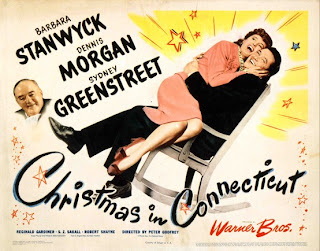 Year after year, television offers up a variety of Christmas movies.  There are perennial favorites like It's a Wonderful Life with James Stewart and Donna Reed, A Christmas Story, A Christmas Carol, and, of course, Home Alone, just to name a few. These are all fine movies, but my very favorite is an old 1945 black and while film I discovered on television when I was about 12 or 13.

It is called Christmas in Connecticut and is a wonderful, zany romantic comedy.  It stars Barbara Stanwyck as Elizabeth Lane, who writes articles of a woman's magazine, Smart Housekeeping, about life on her Connecticut farm with her husband and baby and includes decorating ideas and menus with recipes for the wonderful meals she prepares for them.  In truth, Elizabeth is a single woman living in a Manhattan apartment and couldn't boil water or diaper a baby if her life depended on it.

The love interest is Dennis Morgan who plays Jefferson Jones, a Navy man whose ship was torpedoed by a German U-boat and who spends 18 days in a life raft eating K-rations and dreaming about food and then six weeks in hospital eating mush.

Feeling sorry for Jefferson because he claims he never had a proper home and having finagled an engagement to him, his nurse Mary writes to Alexander Yardley, the owner of Smart Housekeeping, asking if Jefferson could spend the holidays at the Lane farms to experience a real home.  Yardley thinks it's a splendid idea, and that it would even be fun for him to join the festivities.

Luckily, Elizabeth has a friend, John Sloan, with a farm in Connecticut who just happens to want to marry her.  Elizabeth, thinking she will be fired when Yardley finds out the truth about who she is, agrees to marry Sloan in exchange for entertaining Jefferson and Yardley for the holidays.  Elizabeth, Sloan and Felix, the restaurant owner who provides her with the excellent recipes for the articles, all head to the farm.  Conveniently, Sloan's housekeeper watches a baby for a woman working in the nearby munitions factory.

But before the Justice of the Peace can marry Sloan and Elizabeth, Jefferson Jones shows up.  Now here is the sticky part - it is love at first sight, Jefferson and Elizabeth are totally smitten with each other.  Nut, he believes Elizabeth is a married woman, and Elizabeth believes he is engaged to be married.

From this point on, it is a series of close calls with the judge, changing babies (turns out the housekeeper watches two different babies - a boy and a girl), domestic close calls (the best is when  Elizabeth is asked to flip the breakfast flapjacks the way she describes in her articles and it is clear she doesn't know how), shameless flirting and lots of innuendo.

Does love win out?  Well, it's a romantic comedy, so you probably can guess the answer to that.  But, really, the best part of this movies is the journey.

Barbara Stanwyck was really a great comedic actress, but this wasn't showcased enough in her film career.  Certainly, she was as good as Katherine Hepburn, though in a different way.  This was the movie that made her one of my favorite actresses.  And Dennis Morgan wasn't too bad as the love interest, he is mighty good-looking and has a beautiful tenor voice.

As for the war - well, there is the footage of Jefferson's ship being torpedoed and of him and his friend on the life raft.  And Felix, whom Elizabeth introduces as her uncle, actually fled Hungary because of the Nazis.  Interestingly, although there are many mentions of the war, including a dance to sell war bonds,  there is no such thing as rationing, or shortages of any kind.  Ironically, though the film was made during the last year of the war, it was released in theaters three days before J-J day.  People loved it.

Elizabeth Lane is often compared to Martha Stewart, but forget that comparison.  Elizabeth is totally domestically challenged.  However, Elizabeth's magazine feature was modeled on Gladys Taber, who did live on a Connecticut farm, Stillmeadow Farm, and who did write a similar feature in Ladies Home Journal called Diary of Domesticity.  And according to Gladys's granddaughter, copies of Ladies Home Journal were often included in care packages to soldiers.  You can find more about this over at Hooked on Houses along with some wonderful movie screenshots.

And you can find more on Gladys Taber if head over to Letters from a Hill Farm.  Nan has written about Gladys a number of times.

If you are looking for a nice, relaxing holiday movie amid all the hustle and bustle of shopping, wrapping, decorating, cooking, baking and the million other things need to get done, get a copy of Christmas in Connecticut, sit back and have a chuckle or two.

This is the trailer that was shown in movie theaters in 1945.  Enjoy!

P.S. There is a 1992 updated remake of Christmas in Connecticut with Dyan Cannon and Kris Kristofferson and directed by Arnold Scharzenegger.  I avoid it.
Posted by Alex at 10:55 AM