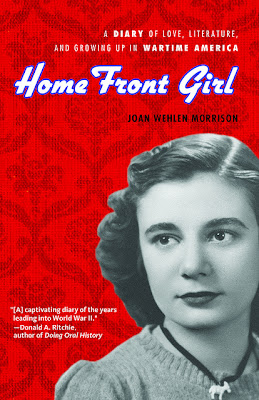 When I was 9 and my sister was 16, I read her diary.  I found out all about her life, what she thought and how she felt about a variety to things.  I didn't get caught, so I didn't get punished, but I did suffer an overwhelming guilty conscience for a long time.  Consequently, I have never committed an indiscretion like that again.  Even so, I have to admit that the bare honestly that can be found in a diary still holds a certain fascination for me.  Maybe that is why I like reading published diaries so much. At least you don't have to worry about dealing with a guilty conscience.

Naturally I was very excited when I first heard about Home Front Girl: a Diary of Love, Literature and Growing Up in Wartime America.  It is a real diary, begun by Joan Whelan in 1937 at age 14 and runs through to 1943 when she was 20 years old.  Joan was the daughter of Swedish immigrants living in Chicago who grew up to become a journalist and adjunct professor of history at the New School for Social Research, so it is not too surprising that she would have kept a diary as a teen.  After Joan passed away in 2010, her daughter found her diary among her papers and decided to share it with the rest of the world.

And I am so glad she did because Home Front Girl did not disappoint me.  Throughout her diary, Joan chronicles her thoughts on the ordinary everyday events in her life.  Here, then, is a sampling:

She also writes about first kisses, singing in the church choir, going to the movies with friends, and the opera with her mom, studying for exams in school and writing a column in the school paper.  In short, Joan lives the the busy life of an intelligent, energetic teenage girl in the 1930s.

But Joan also has a very serious side that is evident when she is writing about life and current events.  It is then that we really get to see how well rounded this vibrant, thoughtful girl is, and we get a glimpse of the woman she became.

Current events: Tuesday, May 2, 1939 We are on daylight savings now.  Germany is giving Poland two weeks to give her the Polish corridor.  Otherwise war.  However, England and France on side of Poland.  So Russia too, maybe...`

But perhaps the most poignant entry of all is the one for Thursday, October 10, 1940, when Joan writes about life for her generation and the impact World War I, the prosperity of the early 1920s and then the depression had on their character development, and on their bodies: "Oh, you, my generation! - we were a lovely lot!  Sharp minds - arguing all the time and brittle bodies and even more brittle laughter - and all the time knowing that we were growing up to die." (pg 143)

Joan Whelen's diary is by turns funny, serious, playful, patriotic, optimistic, pessimistic and moving.  It is supplemented with lots of her own drawings that are part of the diary, as well as photos and newspaper clippings she saved.  It turns out that Home Front Girl is more than just a diary, it is a document of its time and a very interesting window through which to view this eventful period of era.

In truth, Home Front Girl: a Diary of Love, Literature and Growing Up in Wartime America was so much better than my sister's diary.

Be sure to visit the homepage of Home Front Girl for more information and resources a about Joan and World War II.