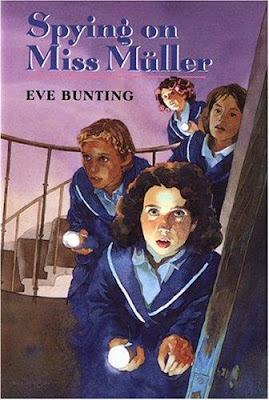 I always enjoy a good school story and Eve Bunting's somewhat autobiographical novel Spying on Miss Müller is not exception.  It is 1941 and Jessie Drumm, 13, and her friends Lizzie Mag (really Elizabeth Margaret after the English princesses), Ada and Maureen all attend the co-ed Alveara boarding school in Belfast, Northern Ireland.  And so far, the war has not affected them much.  Still, it doesn't prevent them from convincing themselves that their formerly favorite German teacher, Miss Müller, is really a spy who is somehow sending coded signals to the Nazis from within the school.  The fact that Miss Müller was only half German and that she was also half Irish didn't seem to factor into their thinking.   Now, as the war progresses,  they are giving her the cold shoulder, despite the kindness she had shown her students in the past.

Certain they are right, all the girls need is some concrete proof of her spying.

But how to get that proof?  After Jessie gets up one night to go to the bathroom and sees Miss Müller leaving her room, she decides to follow her.  The only problem is that Jessie loses her on the stairs leading to the roof right near the 'coffin' room, so called because the girls believe it it haunted by the ghost of Marjorie.  Not willing to go further in the dark, Jessie turns back.  No sooner does Jessie return to her dorm and the air raid siren goes off.

What a coincidence, the girls think, that Belfast should be bombed for the first time on the very night Miss Müller is seen heading towards the roof.  Surely she must have sent a signal to the waiting Nazis to send planes and bombs.

As the four friends plan their strategy to follow and catch Miss Müller, Jessie lets their scheme out of the bag to loner Greta Ludowski, a Jewish refugee who got out of Poland before the Nazi invasion, though her parents were not so lucky.  Now her father was dead at the hands of the Nazis and Greta wants vindication.  She demands to be let in on the action to get Miss Müller and make her pay for what her countrymen did.  Then Jessie discovers that she may have something more to worry about.  Her extremely sharp metal nail file is missing and she later discovers it in Greta's possession.  Could Greta be planning something very sinister?

Despite what she says, Jessie still has doubts about whether or not Miss Müller is really a German spy, after all, she had always been so kind to the girls.  But when the opportunity to search Miss Müller's room comes her way, Jessie loses the modicum of doubt and sympathy she may have felt when she finds a picture of her teacher's father, - dressed in a Nazi uniform.

The girls are more determined than ever to catch Miss Müller and expose her as spy masquerading as a teacher, but in the end, Miss Müller has one more lesson to teach her students and it just may be the most important lesson of all.

One of the nicest thing about this novel is the sense of realism that Eve Bunting has created.  She has written that this school story was based on her own experiences at a Belfast boarding school during World War II: "I remember the good times and the bad times.  I was homesick.  There was a war on and our city was bombed.  We listened for air raid sirens, carried our gas masks everywhere, ate food so bad it was indescribable."   All of this and more has been captured so well in Spying on Miss Müller, making it sad, funny, historical, important.

Nazi hysteria gripped much of Britain for quite a while when the Second World War began.  Understandably, people were afraid of invasion, Fifth Columnists, spies and saboteurs and sometimes went a bit overboard with thinking someone was a Nazi.  Kids heard adults talking about this stuff and often got caught up in the fervor.  It is easy to see how a group of students at a boarding school could easily transfer that hysteria onto a half German, half Irish teacher as a way to contain their fear.

This is a tight, well-written novel, as well as one very few novels written for young readers that show what life was like in the war in Northern Ireland.  However, you can get more information about Northern Ireland in World War II here.