The Secret Heroes by Carla Mishek and Margo Sorenson 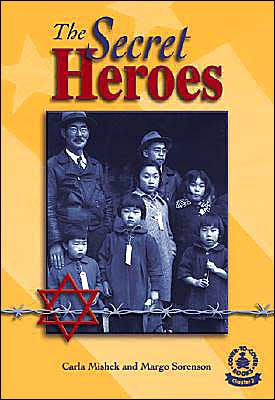 Family history is one of those projects that kids always seem to get in elementary school.  I assigned family history often enough to my 4th graders.  It is a wonderful way to help kids connect to their past and to appreciate what their parents, grandparents and often great grandparents may have experienced.  Sometimes these assignments yield surprising results for a student.  That is certainly the case in The Secret Heroes.

When 5th grader Sam begins his new school, nothing would have pleased him more than to have his zaydeh (Yiddish for grandfather) around to help him adjust.  Instead, he sits off by himself, drawing pictures of the kids playing baseball, a game his zaydeh was helping him to play better.  But now zaydeh was dead, and Sam found himself living in his mother's hometown, the place his zaydeh had settled in when he came to this country.

When his teacher assigns a family history project for Heritage Day, Sam decides to do his on his zaydeh.  Meanwhile, Sachi, the girl who sits next to Sam in class, invites him to play baseball with her and her friends during lunch recess.  Sachi is really nice and a really go player, but Sam shies away from playing knowing he doesn't play well.  But Sachi is persistent and really wants to be friends with Sam.  So when Heritage Day arrives, Sam is in for a very big surprise when he sees Sachi's project.

It is often difficult to find a good chapter book for introducing the idea of concentration and internment camps to children without being so graphic that young readers get scared off learning about these things.  Or conversely, making it sound so benign that they lose interest.  Mishek and Sorenson have managed to hit a happy median with The Secret Heroes.

With a great deal of sensitivity and care, Mischek and Sorenson have managed to convey the inhuman treatment of the Jews by the Nazis, the conditions in the concentration camps, how the inmates helped one another survive and the Death Marches near the end of the war to try to cover up their shameful deeds.  And with the same care, they introduce kids to the internment camps where the US contained the Japanese who were living in the United States.  And they learn about the 522nd Field Artillery Battalion made up of the Japanese American soldiers who volunteered to fight for  their country and who were the soldiers who liberated the Dachau concentration camp.

And since this centers on a family history project, the novel also includes lots of information about Sam and Sachi's cultures.  Throughout the book, words that might not be familiar to young readers are written in bold letters and can be found in a glossary at the end of the book.  There is also an Afterword that gives the history of the Japanese and Japanese Americans during World War II.

I would highly recommend The Secret Heroes for any young reader who may want to learn about their own heritage, whether Jewish or Japanese, and as a supplement to a class learning about family history and/or World War II.  This is a wonderful, inspiring story of bravery and friendship over cultures and generations.

This book is recommended for readers age 7+
This book was sent to me by the author.
Posted by Alex at 4:00 AM