Violins of Autumn by Amy McAuley 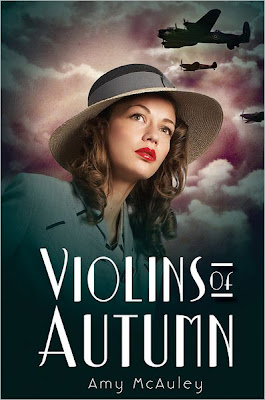 While it may be hard not to make some comparisons of Amy McAuley's Violins in Autumn with the very excellent Code Name Verity by Elizabeth Wein, I think it is always better to form my opinion about a book on its own merits.

It is 1944 and Adele Blanchard, her friend radio transmitter Denise Langford, and two men have just parachuted into Nazi-occupied France as undercover agents for the Britain's Special Operations Executive, or SOE, to work with the French Resistance sabotaging German operations in preparation for D-Day.

Of course, the landing doesn't go exactly as planned.  One of the men is arrested almost as soon as they hit the ground, but Adele, Denise and the other man, Bishop, find each other and make their way to the agreed upon meeting place with Pierre, a member of the French Resistance.

It's not long before the two girls must make their way to Paris,  With false papers, they impersonate two French girls traveling by bike, securing Denise's radio in a suitcase to one of them.  But along the way, Adele and Denise witness a British plane crash after being hit by enemy fire.  They manage to find and rescue the American pilot, Robbie, before the German's do.

The three continue on to Paris, but along the way, they run into some Germans.  Denise and Robbie manage to get by them, but Adele is stopped and her bike to taken away.  Now she must go on on foot, and she's still a long way from Paris.  Luckily, a car comes by and she gets a lift from a Dr. Devereux all the way to Paris.  Devereux gives her is address should she need it.

But Adele and Robbie never show up at their safe house, and she discovers the it has been compromised and everyone was arrested.  With no place to go, Adele rides the metro day after day, avoiding Germans and possible capture.  Eventually, she ends up at the house of Dr. Devereux, where she has a brief encounter with his Nazi-collaborator wife in the process of leaving her husband.  Adele, Denise and Robbie finally find each other. but they must find a safe way out of France for Robbie as well as perform the tasks they are supposed to do as agents for SOE until the hear the coded message from London: "The long sobs of the violins of autumn" signaling that the allies are beginning their preparations of D-Day.

OK, so this doesn't sound majorly exciting, but take my word for it, Violins in Autumn is a very exciting novel.  It is full of espionage, intrigue, danger, kindness, cruelty, and even love.  In the course of this historical fiction novel, McAuley manages to work in lots of information about how operatives for the SOE are trained, how the Gestapo conducted interrogations and how messages were sent and received by couriers like Adele in the resistance.  And what dangerous jobs these were.

One of the things I like when I read a book like this is discover something I don't know.  I knew coded messages where sent between the allies and their operatives in the field, but I didn't know that the one signaling the start of  D-Day within 24 hours to operatives and resistance workers was from the first stanza of Chanson d'Automne by Paul Verlaine: The long sobs of the violins of autumn/would my heart with a monotonous languor.

But Violins of Autumn is, above all, a story about the deep friendship that develops between the two young women who must rely on each other at a time when it is hard to know who one can really trust.  This can be especially difficult when each person can hide behind a false identity. To begin with, Adele is really Betty Sweeney, a 17 year old American who had been sent to boarding school in Switzerland when her father remarried, spoke German and French with native fluency and moved in with her English aunt and uncle when the war began.  Like Robbie, she lied about her age.  And if Adele is really Betty, it stands to reason that Denise is someone else, too.

If you enjoyed Code Name Verity, most likely you will enjoy Violins of Autumn and hopefully appreciate them both for their differences, because both are well worth reading.

To learn more about the real lives of female SOE couriers and radio transmitters like Adele and Denise, see the chapter on Great Britain in Kathryn Atwood's book Women Heroes of World War II, 25 Stories of Espionage, Sabotage, Resistance and Rescue (my review here)

For more information on Special Operations Executive operatives can be found here.

This is book 10 of my Historical Fiction Reading Challenge hosted by Historical Tapestry
Posted by Alex Baugh at 7:15 AM