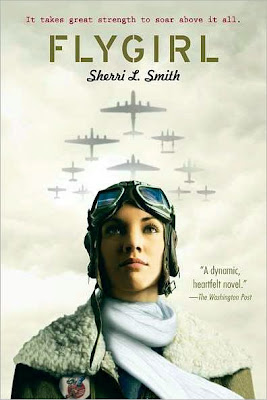 More than anything else in the world, Ida Mae Jones, 18, wants to fly, but she can't.  Not because she doesn't know how, oh no, Ida Mae knows how to fly.  Her father had taught her how to fly his crop dusting plande long ago.  She can't fly because she doesn't have a license and even though she did everything correctly during her flying test, the instructor refused to pass her on principle - she was a woman.  But then the US enters World War II and for Ida Mae there will be no more flying even without a license with gas rationing.

But a new flying possibility opens up in 1943, when her younger brother Abel brings home an ad for female pilots in the new WASP (Women's Airforce Service Pilots) program headed up by Jackie Cochran.  Ida Mae gets very excited until she realizes two obstacles to joining the WASP program - she still doesn't have a license and she is black and the program was only open to white women.

Ida Mae was pretty determined, though.  For one thing, she was so fair that she could pass for white, though she had always chosen not to because it meant cutting herself off from friends and family completely.   As for her license, well, Ida Mae was lucky enough to be named after her father, Iden Mahé, so it was a simple matter of changing the name on his license and replacing his photo with one of her own.

And it worked - Ida Mae Jones was accepted into the WASP program in Sweetwater, Texas much to the chagrin of her mother at first.  But Ida Mae travels to Texas and begins her training.  And she discovers that passing is harder work than learning to fly all those big planes needed for war.  She also makes two close friends, Lily and Patsy, who never suspect anything about Ida Mae other than what she presents herself as and with whom she has lots of adventures and lots of fun while becoming a WASP (was irony in that sentence.)  But unfortunately passing also means that people talk freely in her presence and that includes their attitudes towards blacks.  And there is the intimation of a little romance with one of the pilots.

Much of the book focuses on Ida Mae's training and life in the WASP, but Smith gives the reader enough time with her family and friends from home to make us very sympathetic to what they must have felt when Ida Mae chose to turn her back on them in order to fly.  And by the same token, we really are made to understand what her choice cost Ida Mae herself.  And in the end we hare left asking the question if you deny who you truly, are can you be truly happy?  It is for the reader to decide after reading Flygirl.

Passing is not a very common theme in YA literature.  And in her Author's Notes, Smith writes that it is not known how many women in the WASPs may have passed for white in order to fly the way Ida Mae did.  There were certainly black woman like Bessie Coleman who were passionate about flying, but not many would be fair enough to pass and perhaps ever fewer would want to.  My heart went out to Ida Mae, she was such a sweet, likable character, but she clearly didn't realize what she was giving up.  Any my heart went out to her family and her best friend and supporter Jolene and what they lost with Ida Mae's decision.

Smith has written a story that will give the reader plenty of food for thought about what identity really is and can you successfully and satisfyingly alter who your are.  And as far as the WASP is concerned, she has done her job and carefully researched it so that Flygirl is an excellent example of historical fiction.

A very helpful discussion guide for Flygirl is available here

For information on the WASP Program in WWII, including a biography of Jackie Cochran, please visit the National WASP World War II Museum

This is book 9 of my Historical Fiction Reading Challenge hosted by Historical Tapestry
Posted by Alex Baugh at 5:30 AM