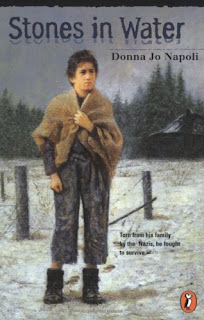 I picked up this book in a library book sale because it was about another one of those little known events that occurred during World War II: the snatching of Italian boys by Nazis and used as forced labor.  And also because the setting, at least in the beginning, was in Venice, Italy in the early 1940s, an unusual setting for most MG or YA novels.  The story centers on the friendship between 12 year old Roberto, a Catholic, and Samuele, a Jew.  It begins with the lure of seeing an American western film at the local movie theater proving to be too great for young Roberto to pass up.  Before long, however, not only is Roberto sneaking off to see the movie, but he is joined by his older brother Sergio, and friends Memo and Samuele.

The movie hasn't even begun when German soldiers swoop into the theater and round up all the boys.  Before they know what is happening, they are sorted by age so that Sergio and Roberto are separated from each other.  The boys are then put on trains heading north.  All through Italy, the trains picks up more and more boys.  Gradually, the trains head east to the Ukraine.  The whole operation appears to be such a perfectly planned operation.  A Western movie would and did draw only boys from the area, and no girls.  Non of the boys in any of the groups speak the same dialect, so there is little communication among them.  Soon, though, the boys realize the danger for Samuele, who is circumcised, so they change his name to Enzo and Roberto gives him his St. Christoper medal to wear.

Eventually, Roberto and Enzo end up in a labor camp, where all the boys are forced to build an airstrip for supply planes to land.  The work is hard and there is little food, and as winter comes the boys must find whatever rags they can use to try to keep from freezing, usually striping what they can off dead bodies - dead soldiers and prisoners alike were fair game.  At night, Enzo entertains Roberto with stories, most from the Old Testament, to keep his morale up.  The friends continue to support each other, so when another boy discovers that Enzo is Jewish and demands he give him most of his food ration, Robert shares his ration with his friend.

Throughout their captivity, Roberto worries about his parents and about getting home, but there seems to be no end in sight for the boys.  And to make matters worse, Enzo begins to weaken from the lack of food.  And to top it all off, with winter's snows, survival becomes more and more difficult for the boys.

Will they ever see home again?

This was the kind of coming of age story that really makes you realize what the concept 'coming of age' really means.  As you read Roberto's story, you can watch as he is transformed from a boy who had romanticized war to a thinking, feeling young man who realizes and appreciates the horrors of war without ever having been on a battlefield.  Yet, right from the beginning, Roberto and Samuele witness shocking Nazi brutality whenever boys tried to run away or when they fainted while working.  These were sobering lessons, and both boys heeded them in order to stay alive.

Stones in Water is a fast read, and for the most part it was excellent.  Some readers seem to feel that the end of the book didn't have a satisfactory conclusion, but I liked it.  Hinting at a sequel, I felt that Roberto has more in store for him than just going home.  And indeed, a sequel was written, Fire in the Hills, continuing Roberto's story.

One thing did bother me about Stones in Water.  It is based on reality, but I was sorry there was no Author's Note at the back of my copy to more fully explain the basis of the story, just an easy-to-miss brief mention in the acknowledgements.  It seems that Napoli has a friend, Guido Fullin, who was taken by the Nazis as a boy, just like Roberto was and Stones in Water is loosely based on him.  She did her own research but said no more about it.  I would have liked a list of further reading, if one can be done, about Italian boys being taken and used as forced labor despite Germany and Italy being aligned with each other during the war.  When I googled this topic, I didn't find much more than an interview with Donna Jo Napoli in which she reiterated what she wrote in her acknowledgements.  The interview may be found at Examiner.com

Despite this, Stones in Water is a very worthwhile story for readers young and old.

This book is recommended for readers age 10+
This book was purchased for my personal library.
Posted by Alex Baugh at 6:00 AM