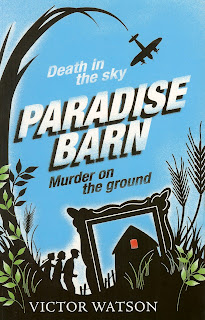 It is September 1940 and the Blitz has begun in full swing.  More children are again being evacuated from London, including Adam Swales.  But when Adam decides to get off the train at Great Deeping instead of his original destination, he finds himself living at  the Ely Guesthouse, in the company of best friends Mollie Barnes, whose mother runs the guesthouse, and Abigail Murfitt, her neighbor.
Around the same time Adam arrives at the Ely Guesthouse, so do two more guests - the very kind, friendly Cuffey, an older engineer working for the government, and Hilda Pritt, a young but loud obnoxious pilot with the ATA (AirTransport Auxiliary) ferrying planes around England.
Mollie and Abigail have been involved with trying to solve two seemingly unrelated mysteries.  The first is the murder of a mysterious man found shot on the public footpath , the second mystery is the theft of various items belonging to some of the residents of Great Deeping.  One night, Mollie suddenly realizes that the bricks in the floor of their hangout, Paradise Barn, have been changed, and things begin to  heat up.  And when the kids dig up the bricks, they discover the stolen items along with a painting missing from a museum in Paris, tying the murdered man to it since he is finally identified as a French art dealer as well as the local thefts.
Ironically, Adam is quite an accomplished artist himself and recognizes the painting from an art book he left in London.  He and Mollie go there to fetch the books one afternoon and get caught in a Blitz raid during which Adam’s house is totally destroyed.
Back in Great Deeping, the three children set about seriously looking for the thief/killer.  They suspect everyone, including Hilda, after they see an American pilot friend of hers nosing around Paradise Barn, and, after all, she does carry a gun in her purse.
But can three young people solve a crime that is even baffling the police?  Well, never underestimate the cleverness of children.
Along the way to solving the crime, Watson has written not just a nice mystery for middle grade readers, but he also provides an excellent look at the experiences of war in both London and a small village in East Anglia as it impacts three friends with very different personalities, living under different circumstances.  It also has nice depictions of woman who have had to do their bit for the war by taking on the jobs formerly held by men - running a guesthouse, ferrying plane and working for the railroad.  This is nothing something included in kid’s books very often.
The story involves a moral dilemma for Mollie, which some readers may find disturbing, but which certainly opens up all kinds of questions about right and wrong and how to handle a situation with requires not so much a lie as a withholding of information.  And to be honest, I am not sure how I feel about this being placed on the shoulders of a young girl.
Paradise Barn is a story about starting to come of age, as the characters experience loss, grief, betrayal, and learning the not everyone is who they seems to be.  Mollie, in particular, also must learn to accept the knowledge that each one of us is capable of both good and evil.  A hard lesson at a young age.
Victor Watson, now retired from Homerton College, Cambridge, England has been an academic his whole career until publishing this first novel.  He has done an wonderful job of it, writing with a certain amount of lightness about some heavy themes, so that young readers will never feel overwhelmed.  And, most important, never sounding like an academic.  And, now, a sequel is also available, The Deeping Secret, which continues the story of the three friends and, I assume, their coming of age journey.
This book is recommended for readers age 10 and up
This book was purchased for my personal library