From the Archives #18: Book Care Advice from the Girl’s Own Annual

Between 1880 and 1956, a British paper for girls was published called The Girl's Own Paper.  The paper contained all kinds of stories, many by well know authors like Angela Brazil and Noel Streatfeild. At first published on a weekly basis and later becoming monthly, The Girl's Own Paper also contained articles on such topics as sports, clothing, hobbies, travel.  An annual was also published every year, conveniently in time for the Christmas season, that contained only the stories and articles, all advertising was eliminated.
But after World War II started, paper was in short supply and war economy standards were imposed on printed matter.  The Girl’s Own Paper became a much smaller monthly and the annual was no long published.  The last annual was Volume 62, printed covering October 1940 to September 1941
I have a small collection of Girl’s Own Annuals, that only consists of the last 6 years they were published.  I was looking through Volume 62 the other day, when I got to the last page of this last volume and I found this bit of sage advice on the care of books, which I now share with you: 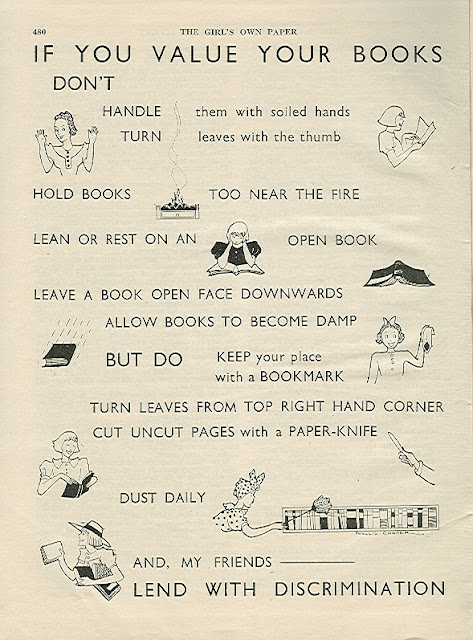 A much more complete history of The Girl’s Own Paper can be found here.

Email ThisBlogThis!Share to TwitterShare to FacebookShare to Pinterest
Labels: From the Archives