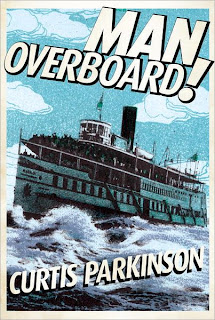 Man Overboard! is a novel whose opening action takes place on the very real Rapids Prince,  one of several large steamships which ran the rapids on the St. Lawrence between Prescott and Montreal, Canada before the St. Lawrence Seaway was built.  Though dangerous when it passed through the maelstrom, the trip was otherwise routine.
So, when high school friends Scott and Adam took summer jobs as deckhands on the Rapids Prince, they never expected to have the kind of adventure it turned out to be, and all because of Scott’s passion for a Packard Twelve Touring Sedan and a delicious piece of apple pie with ice cream.
It all started when the chauffeur driven car arrived at the dock and a a very wealthy-looking man got out and boarded the Rapids Prince under the name G. Phillip Dale.  Scott wanted to take a look at the car, and asked the chauffeur, named Twitch, if it would be OK.  Twitch promptly told Scott to get lost.  Meanwhile, Adam, now a waiter instead of a deckhand, slipped the apple pie to Scott.  Looking for a quiet place to eat it, Scott decided to sit on the car’s running board.
That was when he overheard the conversation between Twitch and Mr. Dale who was really named Mr. Vandam.  Vandam was telling Twitch that their contact, Heinrik, was being followed, presumably by a government agent.  Vandam and Heinrik plan to deal with this agent onboard the Rapids Prince, while Twitch takes the car to Montreal.
Things went smoothly onboard ship until it reached the beginning of the maelstrom, the most turbulent part of the rapids, when someone suddenly screamed “Man Overboard!”  Turns out, it was Canadian Agent Dereck Patterson, a name Scott recognized from the overheard conversation between Vandam and Twitch.
What to do?  Tell the Captain or police why he was on the running board of a car would mean getting both Adam and himself in trouble, maybe even fired, and the Captain’s temper was legendary.
To make matters worse, the German spies had seen him running from the car and knew what he looked like.  Scott hoped that they were no longer interested in him, but when the boat docked in Montreal that hope was dashed.  Yet, the spies managed to capture Adam instead, threatening to hurt him if Scott told anyone what he knew.  As the Packard drove off with Adam inside, Scott jumped on the back and held on for dear life in an attempt find out where the spies were hiding out.
Parkinson based Man Overboard! not just on the real Rapids Prince, and his first hand knowledge of the area in which the story takes place, but also on reports about the German spies who really did enter Canada via submarine on three different occasions during World War II, just as they has in the United States, and were quickly arrested  These unsuccessful attempts to infiltrate the US and Canada always make such good fictionalized adventure stories and Man Overboard! doesn’t disappoint on that score.
What I liked most about Man Overboard! was that it reminded me of some of the books I read growing up, books like the Hardy Boys.  The characters aren’t particularly deep, but they don’t have to be, what counts is the action.  And there is plenty of that.  It is an exciting, fast paced action packed story from beginning to end that is sure to please middle grade readers, particularly boys.
And right now, there is still time to sign up to win 1 of 2 copies of Man Overboard! on Goodreads courtesy of the publisher.  The giveaway runs from January 10, 2012 to February 10, 2012.  You can enter to win a copy here
This book is recommended for readers age 10-12
This was was received as an E-ARC from Netgalley.com
Man Overboard!
Curtis Parkinson
Tundra
March 2012
160 Pages
Posted by Alex Baugh at 10:21 AM