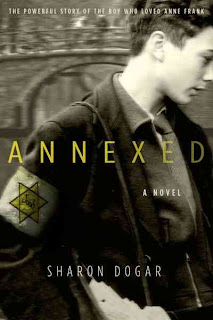 Annexed is a fictionalized imagining of the content in the diary kept by Anne Frank in hiding, but this time life in the annex is told by Peter van Pels.


And I have to admit I started reading Annexed with a great deal of trepidation.  After all, it had caused quite a sensation when it was published.   Sharon Dogar was accused exploiting Anne’s diary and of ‘sexualizing’ her.  There were many who did not want to see this Anne Frank.  But, while the Anne of the diary may be a symbol of courage and hope, the real life Anne, as we know now know, was much more human, a teen who could be self-centered, demanding and highly critical of those around her one moment and sweet, charming and full of confidence the next.  And who also thought about love and sex.  In other word, Anne Frank was a typical 13 year old adolescent.  And, to her credit, Dogar has captured this human version of Anne so well in Annexed.
But now, it is Peter van Pels’s turn to tell his story. The real Peter was only 15 years old when he disappeared into the annex.  In this imagined version, Peter is at first portrayed as angry, sullen and resentful, not wanting to go into hiding, especially not with Anne Frank and her family.  But after witnessing his girlfriend and her family being rounded up by the Gestapo, he realizes it is the only real option left to him.
Once he is inside the annex, Peter just wants to sleep.  Everyone there gets on his nerves, especially the always cheerful, constantly talking, sometimes critical Anne.  But gradually he gets up and starts participating in life in the annex.  At first, Peter, Anne and her sister Margot spend a lot of their time together in the attic, but gradually an attraction begins to bloom between Anne and Peter, much to the disapproval of the adults around them, particularly Anne’s parents.
But as curious as Peter and Anne are, this relationship doesn’t go beyond some cuddling and a kiss.  It is all in the diary and Dogar has not added anything to it except Peter’s feelings.  Dogar makes it clear that this fictionalized Peter, like Anne, is afraid of missing out on an intimate relationship with a girl because of the circumstance under which is now lives.
Annexed is written in two parts.  The first part covers daily life in the annex.  Each chapter begins with a date and a one line description of what is going to happen, yet Dogar doesn’t seek to imitate Anne’s diary doing this.  This part is interspersed with Peter’s thoughts as he lay dying in Mauthausen’s sick bay and this gives the impression that he is reflecting on his life in the annex. The second, much smaller part of the novel takes place in the camps - Auschwitz and Mauthausen.  It too is told reflexively at Mauthausen.
I thought that Dogar’s portrayal of Peter is completely believable.  He probably was, after all, a teenage boy with all the fear, anger, frustration and resentment of hiding and being confined simply for being a Jew, as well as all the thoughts, urges and questions about girls, love, and sex that boys have at the age.
Sadly, no one knows who betrayed the people in the annex.  It could have happened any number of ways.  Dogar does intimate that the betrayal and a break-in may be linked, but that is all.  It remains a mystery even today.
All in all, I thought Dogar did a great job in imagining the the annex from Peter’s point of view.  And it is important to remember Annexed is a fiction, even though it feels so real a times.  Perhaps because there are so many parts of the story that are more obviously taken from what Anne had written in her diary.  Which is not to imply that Dogar simply rewrote the diary.  Peter is his own person in the novel.  But I do think it is important to read Dogar’s afterward, to see where she has taken poetic license and why.
Most important, I feel that Dogar remains respectful of Anne Frank’s memory as a hero of Holocaust, and reminds us that everyone in that annex is a hero, too, in their own way. But she doesn’t let us forget that they were also human, and heroes are always more heroic when we remember that they are only human.
This book is recommended for readers age 14 and up.
This book was borrowed from the Webster Branch of the NYPL.
Some excellent lesson plans for teaching Annexed can be found here.
Annexed
Sharon Dogar
Houghton Mifflin
2010
341 Pages
Posted by Alex Baugh at 9:31 AM

Email ThisBlogThis!Share to TwitterShare to FacebookShare to Pinterest
Labels: Family, Friendship, Holocaust, YA