From the Archives #17: The Chalet School Goes To It by Elinor M. Brent-Dyer 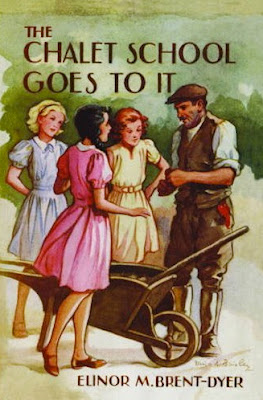 
Wondering what to do and where to go once they reach England, the Chalet School is rescued when Rev. Ernest Howell offers his estate, Plas Howell on the Welsh border, while he serves as a Naval chaplain, providing the school accept his younger 13 year old sister, Gwensi.
Chalet School owner Madge Russell is first to cross the Channel and travel to Howell Village.  Next to go is her sister Jo Maynard, with her triplets, accompanied by Nell Wilson, science and geography mistress.  While crossing, their boat is attacked by a German U-boat.  Realizing the war is coming closer to home, the school move is expedited.
The school reopens at the beginning of summer term and staff and students settle into their new location and routine quite smoothly.  Like everyone in England, the school wants to do its bit for the war effort and chose to Dig for Victory as their project.  Even Gwensi, angry at having her home invaded by a school full of strangers, settles in, making friends and having a wonderful time.
But of course trouble arrives when lights are spotted on the school’s grounds during blackout hours.  A Colonel Black comes to the school to see who might be sending light signals to the enemy offshore.  Even though he questions students and staff individually, no one owns up to doing this treasonous deed.
Much to everyone’s chagrin, Colonel Black has the posted around the school, severally curtailing everyone’s movements.  But all that is pushed aside when their first air raid occurs.  And though the bombing is aimed at Cardiff and Newport, South Wales, it feels too close for comfort to everyone as they take shelter in the basement of the house.
During the raid, the headmistress goes out to see if the house has been hit at all and while she is looking things over, something lands just six feet away from her.  Expecting a bomb, she finds metal container with a streamer that says Schule Chalet.  Thrown by a passing Luftwaffe plane, it is a note from he brother of a former student telling her they are all well, and being forced to do what is demanded by the Reich because they are German, but by no means do they support the actions of their country

I was surprised at the depiction of some of the prefects laughing at stories about some evacuees in the area.  These were described as around 6, 7 and 8 years old, from London and didn’t have any idea what a farm was like.  Among the things they were laughing at was that one child thought eggs came out cooked, another thought a pig had a ring in it’s nose because it was married.  This episode just seemed out of character to me.
Aside from this slightly far-fetched event, I found The Chalet School Goes to It to be an interesting novel.  Doing without because of food, walking or riding a bike great distances because of gas rationing, soldiers stations in the area, suspicions that quislings and saboteurs are a foot all reflect life in Britain during the early days of World War II.  There is even an incidence of former student and friend of Jo’s, Frieda von Ahlen (formerly Mensch) being put into a internment camp on the Isle of Man, a not very well publicized practice in Britain for dealing with aliens.
Elinor Brent-Dyer wrote a number of books set in the war besides The Chalet School in Exile and The Chalet School Goes to It, though the war begins to take more of a back seat. Yet, she never wrote about the end of the war and the Allied victory. A fill-in book, Peace Comes to the Chalet School by Katherine Bruce was published in 2005.  Bruce does a pretty good job picking up Brent-Dyer’s characters and bring closure to the Chalet School war years.
So, if  you like school stories as I do, you can’t go wrong with The Chalet School series.
This book is recommended for readers age 11 and up.
This book was purchased for my personal library
The Chalet School Goes to It
Elinor Brent-Dyer
Chambers
1941, 1952

Email ThisBlogThis!Share to TwitterShare to FacebookShare to Pinterest
Labels: Friendship, From the Archives, Home Front, School Story, Series Books, YA