Queen of Hearts by Martha Brooks 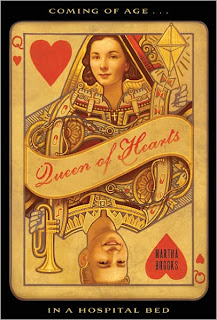 Queen of Hearts is an engaging YA novel set, for the most part, inside a tuberculosis sanatorium in Manitoba, Canada during the years 1940-1941.

Marie-Claire Côté, 15, lives on a small farm across a valley from the Pembina Hills Tuberculosis Sanatorium. The close proximity of the San makes everyone in the community very aware of this highly contagious disease. But so far, the Côté family have all been lucky enough not to have had TB touch their world.

Their luck changes, however, one cold spring evening in 1940 when Oncle Gérard returns to the farm. Gérard, only 25, has been riding the railroads for years, a happy go lucky vagabond. Then, in the fall of 1940, Gérard is diagnosed with TB. At first, he remains at home, but when a place opens at the San, he is taken there, where he dies in February, 1941.

But it doesn’t take long for symptoms of TB to start appear in the Côté children. First, in 11 year old Luc, then in Marie-Claire and finally in the youngest, Josée, 5. In December 1941, all three of the children are diagnosed and immediately admitted to the San. Angry and resentful, Marie-Claire doesn’t adjust well to San life – the food, the routines, even the constant cheerful friendliness of her very sick roommate, Signy.

Though not a willing patient, Marie-Claire does begin to adjust to the idea that she must change her attitude in order to help herself.  This attitude change is bolster by the loss of her brother and the recovery of little Josée. After a while, she even begins to slowly accept Signy’s offer of friendship and manages finds a boyfriend in the San.

The relationship between Marie-Claire and Signy is always strained and through it Brooks brings out an interesting phenomenon that often occurs when someone is faced with the possibility of a friend’s illness being terminal – avoiding them despite their genuinely good intentions. This happens a couple times in Queen of Hearts. Signy’s former roommate, Louise, is a good example. Louise had been moved to a cottage as she improved, but with promises of coming back to visit. The visit doesn’t happen until the day the now healthy Louise is leaving that San: “I always meant to come back and see you. It’s hard, you know to…see people. I mean, after you’re getting better and they’re…” (pg 104) Who knows why this happens – survivor guilt? Fear of getting sick again? Fear of death? It could be anything. It is just not something that is addressed in YA novels about illness very often, but maybe it should be.

I was very interested in this book, since my dear friend and neighbor, George Cassa, who passed away suddenly this spring, once told me about his own personal experience as a teenage TB patient in an upstate New York sanatorium, also during World War II. His experience mirrors much of was is described in Queen of Hearts, adding to the realistic feeling in the novel.

Brooks, who grew up living in a Canadian sanatorium where her father was the medical superintendent, is very familiar with the confined, often boring, lonely life of a TB patient. Her descriptions of the tedious daily routines that Marie-Claire experiences as she “chases the cure,” a rather ironic image given that TB patients are confined to a bed for a good part of their treatment, imparts a true sense of authenticity in the novel.

Queen of Hearts is a poignant, compelling coming of age story which will captivate the reader from beginning to end as Marie-Claire wages her own personal life and death war against TB in the isolated world of the San, far from the battlefields of WW II.

This book is recommended for readers age 12 and up.
This book was borrowed from the Webster Branch of the NYPL

Email ThisBlogThis!Share to TwitterShare to FacebookShare to Pinterest
Labels: Family, Friendship, YA