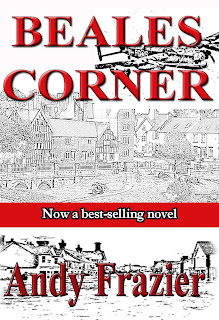 Beales Corner is a real place in the town of Bewdley, Worcestershire, England and Andy Frazier, author of Beales Corner, grew up in this area and is quite familiar with it. So did his father and many of the stories in the book come from the stories Andy heard growing up about his dad’s adventures in the Home Guard during the war.

So it is not surprising that Beales Corner is told through the eyes of two characters in alternating chapters. The present is seen through fourteen year old Tom Mason; the past is seen through the wartime stories of Tom’s grandfather, James Randall, when he was an adolescent. Alternating chapters can often be problematic, but in this book where there is a clear delineation: the past is told in the first person, the present in the third person. And it works very well.

Tom likes visiting his granddad on his summer vacation because it gets him away from all the pressures of home and school and, at least for a little while, his annoyingly enthusiastic 9 year old sister Lizzie. On the other hand, it means listening to his granddad’s old war stores – again and again and again. And yet when his granddad confesses that his is beginning to have memory problems, Tom agrees to help him write down his war stories. And pretty soon it becomes clear that for these two, the past is not past yet – and Tom has the visions to prove it.

During the mornings, while Tom typed frantically away on his new laptop, his granddad relays stories about how he got his first dog named Boots, and how he and Boots were both in the Home Guard, Jim at the young age of 13, taking on the responsibilities of a much older person. And about meeting his best friend, Jean-Francois, a French Cadet, after the French convoy he was in ran over Boots, and then, later presenting young Jim with a new puppy, the second Boots. Jim and Jean-Francois did all kinds the things together, including getting caught in a snow storm on the way to a dance and having to take refuge in a top secret military depot. The two boys even take up rowing, a favorite sport of the people in Bewdley, which sits along the banks of the Severn River, making for great rowing. Eventually Jim gets to the story of the German pilots who crash landed on his grandfather’s farm and the trouble that ensues.

Meanwhile, Tom also meets a mate, Robert Watson, a member of the Bewdley rowing club. Robert teaches Tom about rowing and the two spend a lot of time on the river. Robert also becomes a favorite of Lizzie, after she arrives at Beales Corner with her mother. Tom is really enjoying his summer this year, helping his grandfather and hanging out with a good mate, except for the visions. Who is that foreign looking boy on a bicycle he keeps seeing? And were those World War II soldiers he sees on the Severn Valley Railroad really just actors? They were all there and then gone, just that quickly.

Without getting too spoilery, I can say that the past and present, the visions and the living coalesce in a very satisfying ending.

Frazier has written a very entertaining YA book, moderate ghost story with Beales Corner. Following the writer’s creed “write what you know” he gives a very realistic sense of place – I felt that I knew Bewdley and Beales Corner as more than just a tourist when I finished. His characters are multi-dimensional, effective and realistic. Tom is an introspective young teen, Lizzie is a really annoying kid, but not without redeeming qualities. But Jim steals the show. He is a a compelling figure, a man who seems to be trying to come to terms with something in his past even as he has loyally and nobly carried a secret and a promise for way too long to protect a friend.

In fact, the only complaint I have about Beales Corner is that sometimes there is a little too much exposition and I would have like more action. But other than that, I definitely recommend this book.

Beales Corner was not printed by a large publishing house though it is available online at most book websites, such as Amazon, B&N and Lulu.   I think it is a great example of why we should also look beyond the conventional to find other top notch authors and their books. 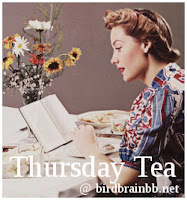 The tea: I drank while writing about Beales Corner Stash's Licorice Spice, a very nice herbal tea that is combined with cinnamon, orange and anise, all favorite flavors.

Did they go together:  Absolutely. Licorice always makes me think of that totally English delectable Licorice Allsorts, a small bag of which I also devoured while writing.