﻿Today is Roald Dahl Day, a day to celebrate the achievements of this prolific writer. Dahl would have been 95 years old today. And to celebrate, I thought I would take a look at The Gremlins, the first children's book Dahl in 1943 while he was still in the Royal Air Force. 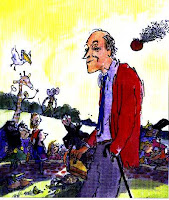 Gremlins are, of course, those pesky little creatures that only fliers can see and which wreck havoc on their planes. In Dahl’s version of the story, the Gremlins were living happily in a lush northern England wood when one day, some humans showed up with the big trucks and machinery. First, the humans cut down all the trees and rolled over the dirt until it was hard-packed.  Then, they built a factory that produced airplanes. In the process, they destroyed all of the homes belonging to the Gremlins.

Now homeless and angry, the Gremlins vowed revenge and set about sabotaging pilots and their planes. This was proving to be a problem during World War II whenever the RAF pilots came up against the German pilots.  The Gremlins seemed to be as much their enemy as the Germans.

One pilot named Jamface told another named Gus that he had his plane's Gremlin almost reformed by feeding him transatlantic postage stamps, a rare delicacy in the Gremlin world. Gus tried that method, but with no success and on his next flight, he and his Gremlin were forced to bail out of their plane, because of the Gremlins antics. They ended up in the English Channel and for three hours, Gus tried arguing and reasoning with his Gremlin and finally won him over.

But while Gus may have won his Gremlin over, that was not so for all of them. The next time he went up in his plane, with a 102° fever, Gus didn’t count on a large group of Gremlins working against him as well as a German Heinkel, whose pilot proceeded to shoot his plane up.  Gus took two bullets in the leg and crash landed.

Gus spent a long time in hospital, thinking about Gremlins. He came up with a plan for reforming them by opening the first Gremlin Training School. The school had two courses – Initial Training and Advanced Training. The school flourished and grew as more and more Gremlins discovered they liked being good.

When Gus finally left the hospital, he was no longer fit for flying.  But what good is an RAF pilot if he can't fly? Yet, try as he might, he continued to fail the medical test for flying. Seeing his distress, the Gremlins decided to help Gus. Word went out to all Gremlins that on the day and time of the next medical exam, they were to show up and help Gus pass the exam. And so they did and Gus was able to return to doing what he loved - flying.

Gremlins were well known among RAF pilots, who talked about them all the time. After all, it was very convenient to blame them for everything that went wrong.  Capitalizing on this superstition, Dahl wrote The Gremlins, after he has been invalided out of active duty in 1942.  After Dahl finished his story, Walt Disney considered making it into a movie, even bringing Dahl out to Hollywood to discuss the matter. But the movie was never made, though no one really knows why.

The text of The Gremlins was written by Dahl but the illustrations were done by artists working for Disney, who own the copyright on them. Only 50,000 copies were originally printed in 1943, so copies were scarce. But in 2006 the book was finally reproduced in volume and is still relatively easy to come by.

Dahl had joined the Royal Air Force in November 1938. He later wrote about his early flying experiences in a children’s book called Going Solo. After many flying mission that resulted in being honored with the title flying ace, Dahl was invalided out of active duty due to severe headaches. He spent the rest of the war in Washington DC doing intelligence work. Dahl was invalided out of the RAF in 1946.

Though Dahl wrote for both adults and children, it is mainly his children’s book for which he is most known.
This book is recommended for readers age 10 and up.
This book was read at the NYPL.
There is a lot more information about Roald Dahl on his official website, including a downloadable poster showing 50 ways to celebrate Roald Dahl Day, today or any day. 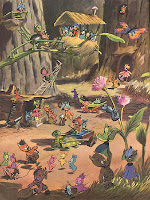 Gremlin homes before humans came and destroyed them.

This is book 15 of my Forgotten Treasures Challenge hosted by Retroreduxs Reviews
Posted by Alex Baugh at 8:38 AM