The Romeo and Juliet Code by Phoebe Stone 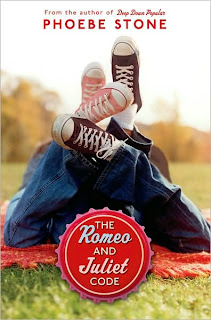 Eleven year old Felicity Bathburn Budwig isn’t really happy about being transplanted from her parent’s flat in London to her grandmother’s coastal house in Bottlebay, Maine because of the blitz in 1941. To begin with, her grandmother, known as The Gram, and her father’s brother and sister, Uncle Gideon and Aunt Miami, are all angry at her dad Danny and her English mom Winnie, and Felicity doesn’t know why. And they are a strange bunch. Aunt Miami (really named Florence, but that has no 'pizazz') is obsessed with Shakespeare’s Romeo and Juliet; Uncle Gideon has a weird sense of humor and is up to something very secretive; The Gram simply rules with a kind but iron hand.


Then, Felicity, or Flissy as The Gram immediately nicknames her, is told she must never go into a certain locked room nor is she to disturb a mysterious person called Captain Derek, locked away in his own room, until he is ready to come out.

Gradually, however, Flissy begins to adjust to the strange Blackburn household and even begins to like it. Until one day when a mysterious letter arrives, postmarked from Portugal but definitely written by her father. What is he doing in Portugal? He is supposed to be in London with Winnie. And why did Uncle Gideon immediately take this letter and go into the forbidden-to-enter room. And each time one of these letters arrives, he does the same thing, but then Flissy notices that he would later cross the beach outside the house and disappear. A mystery indeed and she is determined to get to the bottom of it.

By now, Flissy also has an accomplice. The elderly sea captain she imagined behind the closed door turns out to be a boy named Derek, a little older than she is, who had been quarantined while he was being treated for an apparently mild case of polio. It has caused him to lose the ability to use his left and so he is reluctant to leave his room or go out in public. When another letter arrives from Portugal and Uncle Gideon goes into his mysterious room with it, Flissy talks Derek into pretending he needs help and crying out for his uncle. The hope is that Uncle Gideon will come running, forgetting to lock the door and Flissy can sneak in a see the letter.

The plan works but Flissy and Derek are no closer to knowing anything – the letter is written in code - nothing but a bunch of numbers. They spend the rest of the summer trying to work out the code. They do find out where Uncle Gideon goes after receiving a letter when they successfully follow – the problem here is that you need a boat to get to the small lighthouse island he rows to. And they do manage to talk the mailman into taking them over one day, so that they are finally able to solve one part of the mystery.

But then the letters from Portugal stop coming, and both Flissy and Uncle Gideon are worried about that. Has something happened to her parents? Now, Flissy is more determined than ever to solve the mystery of the number code.  But how?

While all this is going on, Flissy finds out that Aunt Miami has won a raffle she that she had carelessly entered aunt’s name in. The prize is 20 minutes of stage time at the town’s talent and variety show. The problem is that even though Aunt Miami constantly performs Romeo and Juliet at home, she has terrible stage fright.

The Romeo and Juliet Code is a fun mystery in the same vein as a Nancy Drew book, and being a big Nancy fan, I liked that about this book. The mystery is there to solve, but there is never any danger to Flissy or Derek. But as much as it is a mystery, it is also a book the impact of the Second World War on one 11 year old evacuee. Not only must she adjust to a whole new way of life, but also to people she doesn’t know, even if they are relatives, far away from home, parents and everything else that was comforting and familiar. It is the same adjustment thousands of evacuated children were asked to make, and it wasn’t always easy.

Phoebe Stone poignantly and repeatedly portrays the three coping mechanisms that Felicity uses to help her adjust and to keep hold of the life she had with her parents in London and to keep her fear for them under control.

The first of these coping mechanisms is writing letters to her parents, but without an address to mail them to, she simply keeps them together in a box. Yet the simple act of expressing herself helps Flissy feel more connected to them and enables her to safely express her fears for and frustrations at them.

Her second coping mechanism is, of course, Wink. Even though she is 11 and too old for a teddy bear, Felicity has brought him with her to Maine. The reader learns how she feels when she talks about how Wink feels: “But Wink wasn’t listening. He was crying instead, because there were so many secrets here, and everything seemed so odd, making him feel like a bear without a country. He felt he didn’t belong anywhere.” (pg 65)

And Felicity’s third coping mechanism is constantly reminding herself how British children behave: “British children are usually very brave. I saw many, many of them getting on trains in London, waving good-bye to the mums and dads, going alone to the countryside to get away from the bombs. And yet most of them didn’t cry.” (pg 75)

The other advantage to these coping mechanisms is it allows the author to easily provide a lot of background information that helps move the story along. But I did wonder what kinds coping mechanisms kids really did utilize during the war.

The Romeo and Juliet Code was recommended to me by Anamaria at Books Together and I’m glad she did, otherwise I would have passed it up. I would have assumed it was a more contemporary story because of the pink All Star type sneakers on the cover, which wasn’t a happening thing back in those days. But aside from this little mistake, The Romeo and Juliet Code is definitely not a book to be missed.

This book is recommended for readers age 9 – 12.
This book was purchased for my personal library.
Posted by Alex Baugh at 8:44 AM