From the Archives #7: Listen Hitler! The Gremlins are Coming by Inez Hogan

At one time, Inez Hogan was a prolific writer with 63 children’s books to her credit and often illustrated her own stories, as well as those of others. One story she wrote was an odd picture book about gremlins. I usually don’t like books about gremlins because they remind me of that itch that never gets satisfied, no matter how much you scratch. 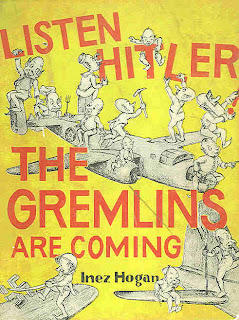 But gremlins have a place in the history of World War II aviation and Miss Hogan’s book, Listen Hitler! The Gremlins are Coming is an amusing addition to gremlin mythology. The gremlin-aviation myth began in 1923, when they were discovered by the RAF. It seems, gremlins like fooling around with gadgets and planes are full of these. air

Miss Hogan opens here story with a little explanation of who gremlins are by one named Snoopy (no relation to Charles Schultz's Snoopy).  Snoopy explains that gremlins have always caused all manner of problems for people, particularly pilots, but no one was bothered by them until World War II.


Snoopy, so called because he has big ears and like to eavesdrop on conversations, is quite indignant after overhearing an RAF pilot telling an American pilot to “watch out for [gremlins.] They are hindering the war for freedom.” Gremlins, he tells us, love freedom; freedom gives Gremlins more opportunities to create chaos.

Snoopy can't get anyone to listen to him because he simply can’t get the other gremlins to stop what they are doing and pay attention to what he is telling them.  Instead, they start to reminisce about past accomplishments, providing an opportunity for the author to introduce the different specialties of each gremlin:

Subby specializes in submarines, causing subs to submerge when they shouldn’t, or blocking the periscopes;
Waacy causes havoc for WAACs, running their stockings or ruining their makeup just before inspection;
female gremlins or Fifinellas might untie the shoe laces of soldiers while they are marching;
and young gremlins, called widgets, go after children, doing things like mixing up the scrap they have collected for the war effort.

My favorite was the gremlin named Foggy, who likes to fog up the windshield of fighter pilots so they couldn’t see anything. Foggy was foiled when the pilots started eating more carrots so they could see better.  Apparently, being outwitted is not something Gremlins are accustomed to having to deal with.

Snoopy finally does manage to get the attention of the other gremlins and Subby tells them that since they can’t stop hindering people and gadgets, they must now start hindering the people who are threatening the gremlins freedom. Another gremlin tells them that he overheard to pilots talking about the Germans, Japanese and Italians and they are the ones who are threatening Gremlin freedom. The gremlins all agree that they must change their ways and that there is plenty of hindering among these enemies.  The story ends a untied shot from the gremlins:

LISTEN HITLER!
LISTEN HIROHITO AND MUSSOLINI!
Look Out!
The Gremlins are coming!

As I said, this is an amusing story, but it is really a picture book for older kids, teens and even adults. The material may be too sophisticated for younger readers.  It is an old out of print book but still available in libraries, through ILL or even secondhand and antiquarian bookshops. If you like this type mythology or, like me, the popular or social culture of World War II, this would be a good book to look at.

I also found it very interesting that the Library of Congress has this cataloged using a history call number instead of fiction. 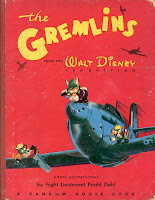 In 1942, Roald Dahl wrote the first book about gremlins in World War II called The Gremlins, which Walt Disney wanted to make into a film, but it never happened. It has been reissued, but the new version lacks something the old version had.  It was first serialized in Hearst International - Cosmopolitan in 1942.  A version of the Fifinella was created for this film by Disney, which became the mascot of WASPs, or Women’s Airforce Service Pilots during the war. 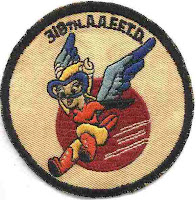 Listen Hitler! The Gremlins are Coming is recommended for readers 10 and up.
This book was read in the Main Reading Room of the Schwartzman Building, the research branch of the NYPL.

In the 1980s, there was a movie called The Gremlins, rated PG13, which has nothing to do with these gremlins. And there is a 1943 Merrie Melodies cartoon with Bugs Bunny and a gremlin, which I personally found too violent and not amusing at all.

More information about gremlins and may be found at Don Markstein's Toonopedia: Gremlins
An article at Time Magazine from 1942 called "World Battlefronts: Battle of Europe: It's Them" at
http://www.time.com/time/magazine/article/0,9171,802434,00.html
Gremlore
Unsolved Mysteries in the World: Gremlins

Email ThisBlogThis!Share to TwitterShare to FacebookShare to Pinterest
Labels: Aviation, From the Archives, Gremlins