Music for the End of Time by Jen Bryant, illustrated by Beth Peck 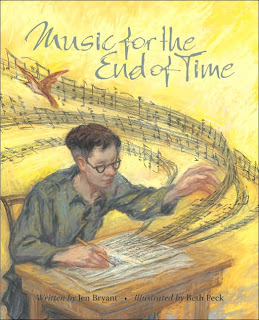 Music for the End of Time is the story about the time that French composer Olivier Messiaen spent as a prisoner of war in *Stalag VIIIA, in Görlitz, Germany. It begins with his arrival at the camp, clutching a knapsack. After the prisoners are settled into their barracks, cold, tired and hungry, one of the other prisoners wants to know if there is food in Olivier’s knapsack. Grabbing the bag, the other prisoners discover there is only sheet music in it. Disappointed, they go back to their bunks.

Not long after his arrival, while Olivier is listening to the morning birdsong, a prison guard comes over and tells the composer to follow him. He takes in to a small, cold room off a lavatory, and tells Messiaen that he may come here for a while every day and compose his music.

At first, nothing comes to Messiaen. He feels discouraged, believing no one will hear anything he creates. One day, a new truckload of prisoners arrive, two of whom are carrying instruments. Inspired by the sight of these musicians, Messiaen soon begins a composition based on the birdsong he can hear, even in prison.

Late in the winter, Messiaen finishes his composition, and on January 14, 1941, along with three other prisoner musicians, performs his newly written composition, Quartet for the End of Time, for all the 5,000 prisoners in the camp, as well as the German guards.

This was a lovely story accompanied by the beautiful pastel illustrations done by Beth Peck and I highly recommend it, despite some criticism. The author focuses only on the story of Messiaen’s musical creation, which is fine. I think, however, she leaves out some biographical information that might be interesting to know. Messiaen was a prisoner of war; he was not in the same kind of camp that Jews and other enemies of the Reich were put into. She says he survived the war, but he really spent one year as a prisoner of war, from May 1940 to May 1941. In her Author’s Note, Bryant does explain that the piece Messiaen wrote was called “Quartet for the End of Time" and it is based on a passage from the Books of Revelations, when an angel announces “There will be no more time.”

This book is recommended for readers age 9-12.
This book was borrowed from the Yorkville Branch of the NYPL.

More information about Music for the End of Time, including a link to a very useful discussion guide may be found Jen Bryant Books

An a short sample of Quartet for the End of Time may be seen and heard at YouTube
*Stalag is an acronym for Stammlager, which is a prisoner of war camp for soldiers not including any officers.

Non-Fiction Monday is hosted this week by Wrapped in Foil