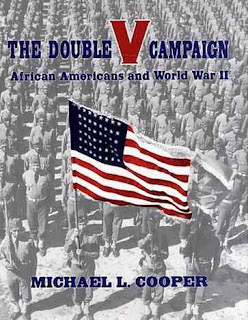 February is Black History Month and I thought I would take another look at the African American heroes in World War II. These were men and women who fought for victory for their country and for their own equality in the Armed Services.

In January, 1942, the editor of the Pittsburgh Courier, a leading, well-respected African American newspaper, posed the question “Why should I sacrifice my life to live half American?” Beginning in February, the Courier ran the Double V Campaign, demanding equality for all. The campaign received overwhelming support from black leaders and readers all over the country.

Racial discrimination had always been practiced in all branches of the Armed Forces in this country even after World War II had been declared. But African Americans began to question why they should fight in a war for a country that treated them like second class citizens. Black soldiers were housed in substance conditions, often far from base conveniences, such as churches, movies and even the Post Exchange or PX. They were given menial jobs working as janitors or in the mess halls, and not really trained for any kind combat duty.

And yet, right from the beginning of the US entrance into the war, in 1941, African Americans began to distinguish themselves in battle. For example, Dorie Miller was a messman on the USS West Virginia when it was bombed by the Japanese in Pearl Harbor. Dorie ran up on deck, found his wounded commander and carried him to safety. He returned to the deck, picked up an antiaircraft weapon he had never been trained to use and managed to shoot down four enemy aircraft. When the Courier tracked down the identity of the “Negro messman,” as he was called in all the newspaper articles, and printed his name, Dorie was finally awarded his well deserved Navy Cross for heroism. But if the Courier hadn’t printed his name, Dorie’s brave actions and quick thinking would have gone into obscurity, but now his heroic legacy lives on.

Michael L. Cooper traces the history of the campaign from it beginnings to the end of the war and beyond. Change first began with the construction of Fort Huachuca in Arizona, an all black base that was at least built on the same standard as the white bases. There, the Ninety-third Division was first formed and trained for combat in the Pacific against the Japanese. He tells about other heroes who performed so gallantly on both the Western and the Pacific fronts. Cooper ends with the awarding of the Medal of Honor, the country’s highest honor, to seven African American soldiers from World War II. Unfortunately, this didn’t happen until 1997, when President Clinton had the honor of recognizing their contributions. It was a long time coming! 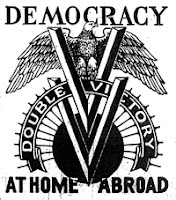 The Double V Campaign shows one way that the power of the people and press began the long road to change the climate of racial prejudice that has gripped this country right from the beginning. This is an excellent book for introducing this topic, as well as an interesting, but again little taught aspect of African American history.

This book is recommended for readers age 11 and up.
This book was borrowed the Yorkville Branch of the NYPL.


For more information on The Double V Campaign, see Newspapers - The Pittsburgh Courier and
Fighting For Democracy - African Americans

Non-Fiction Monday is hosted this week by Wild About Nature