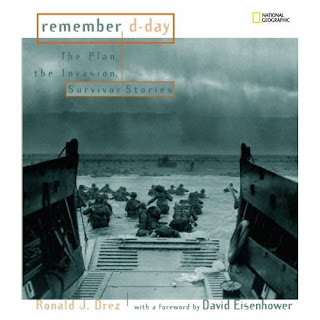 This award winning book was written by Ronald Drez and published by National Geographic to honor the 60th anniversary on June 6, 2004 of the invasion of Normandy, or D-Day as it is more commonly called. Drez begins with some background information. In the first chapter, Hitler’s War, he describes Hitler’s desire to dominate Europe and the British Isles. Drez also explains show the United States entered the war as a result of the attack on Pearl Harbor on December 7, 1941. Lastly, he relates how Joseph Stalin, leader of the Soviet Union, wanted British and American forces to open a new battle front in the west because he was fighting Hitler in the east and could not hold out much longer. A new battle front would divert some of Hitler’s forces and relieve the Soviets.

The second chapter, Fortress Europe, covers the fortifications on the western front that Hitler had in place for defending Germany and the countries he has already conquered. Given these defenses, Drez discusses why Normandy Beach in France was picked by General Dwight Eisenhower for the invasion of Europe, which was code named Operation Overlord, and the problems facing the Allies in order to accomplish the first part of the invasion. One of those problems was that the Normandy has not port facilities. But the problem was solved and how it was is fascinating reading in this book. Basically, the reasoning was if there are not ports, bring them with you.

But part of a war is always trying to through the fool the enemy so he doesn’t know what you are up to, and Chapter 3, The Deception, covers this aspect. Security surrounding Operation Overlord was as tight as it could possibly be and everything was scrutinized and monitored to make sure there were not leaks. Drez does relate a curious coincidence about the code names for all the operations involved in the invasion. In a series of crossword puzzles, the words Omaha, Utah, Mulberry, Overlord and Neptune were answers to clues. Omaha and Utah were codes for where the Americans were to land in Normandy, Mulberry was the code named for the ports that being built, Overlord was, of course, the name of the invasion operation as a whole, and Neptune the code name of the cross Channel crossing of the Allied Forces. This was an interesting coincidence that readers of All Clear by Connie Willis will appreciate. As are tactics like placing rubber tanks around the English countryside, used to make the enemy think British forces were larger than they actually were, and building fake camps for troops that didn’t exist. There is also a great picture in this chapter of the computer (one of the first) used to break the German’s “unbreakable” Enigma code.

In Chapter 4, The Decision to Go, Drez really captured the tension surrounding the decision about when to start the invasion. The weather and conditions in the English Channel played the major role in determining the best time to go, because both can change on a dime. D-Day was originally scheduled for June 5, 1945, but weather conditions forced it to be postponed to June 6, 1944. I can only imagine what it was like for the troops holed up in cramped conditions waiting to take off by air or sea after being psyched up for the 5th of June and than having to postpone.

In Chapter 5, The Invasion, Drez explains what happened to everyone who was part of the invasion, beginning with the paratroopers whose job it was to secure the beaches. He details for the reader how things were done, mistakes that were made, consequences of carrying out the invasion and the success of the operation. Drez does not dwell on the horrible deaths of the soldiers who were initially killed by German machine guns, but he does provide enough information about massive number of men who gave their lives for this operation.

One interesting fact that was omitted from Remember D-Day which surprised me is that there is no agreed on meaning of the term D-Day. As far as the Allied invasion is concerned, no one really knows what it stands for, if anything, although there are lots of theories.

I am not very interested in military things, my bent is much more social cultural. Yet, I believe it is still good to understand some military things. This is one of those really excellent books that explain these kinds so well that it keeps your attention throughout. And there is so much more to it than just this brief synopsis. Drez is able to present events, incidents and people in a clear, logical way so the readers doesn’t get lost or confused, yet he is never condescending to his target readers. He has also included a number of photographs, maps and eyewitness accounts, even that of a former German soldier who was defending Normandy. In addition, Drez also discusses the different parts the British, Canadian and American leaders and troops played, so the reader understands it was not just an American victory but a concerted effort. I cannot praise this book enough and highly recommend it.