Christmas is almost here.  It is a season of hope, joy and miracles.  It is also the season of peace on earth, good will towards all men and that is my personal Christmas wish for all the world. 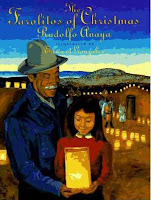 The Farolitos of Christmas: a New Mexico Christmas Story by Rudolfo A. Anaya, illustrated by Edward Gonzales. The story of a young New Mexican girl named Luz during World War II. Her father had been wounded a month before Christmas and is in a hospital. Her grandfather makes a promise to Santo Niño to light farolitos, or small lanterns, on Christmas Eve in exchange for the safe return of his son. But he is so ill and weak he cannot even chop the wood needed to make base for the candle lights that for the farolito, or small lantern.  A promise made to Santo Niño must be carried out only by the person who makes it.  Worried about both her father and grandfather, Luz finally figures out a new way to make the farolito that her grandfather can do without wood and it remains to be seen if Santo Niño honors his part of the promise.  This is wonderful book about an old Southwestern tradition and includes a glossary of Spanish used in the book.  Recommended for ages 5-9. 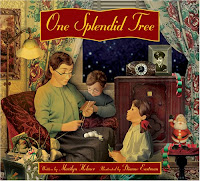 One Splendid Tree by Marilyn Helmer, illustrated by Dianne Eastman. This is the story of Hattie, her younger brother Junior and their mother as they try to adjust to living in an small apartment in the city during World War II. Their father is fighting in the army and their mother has taken a job in a factory to help support the family. With Christmas coming, there is no money or space for a tree and it just doesn't feel like Christmas.  One day, Junior finds an abandoned large potted fernlike plant in the hallway and thinks it will make an ideal makeshift Christmas tree.  At first, Hattie is against it, but remembers her dad saying Christmas is a time when magical things can happen.  She changes her mind and they enthusiastly decorate the tree with homemake decoration leaving it in the hallway so everyone in the building can enjoy it. This is the season of peace on earth, good will towards all mankind. Can their tree create that kind of feeling in a building where everyone goes about his/her own business and don’t bother with their neighbors?  Recommended for ages 4-8.

In the Dark Streets Shineth: a 1941 Christmas Eve Story by David McCullough. This is a rather odd, but nevertheless interesting book about what feels like totally unrelated things.  In late December 1941, Winston Churchill traveled to Washington DC to speak with President Roosevelt about the war.  It was less that a month since the US declared was against the Japan and her allies, Germany and Italy. While here he heard the hymn O Little Town of Bethlehem for the first time.  McCullough then gives the history of that hymn and also of the song I’ll be Home for Christmas, written especially for the war and at the time, the most popular Christmas song besides White Christmas. McCullough attempts to tie them to Churchill’s visit. There are photos of ordinary people and the Roosevelts celebrating Christmas, along with photos of Churchill's visit.  At the end of the book is a transcript of Roosevelt's and Churchill's Christmas Eve address to both nation.  It is a newly published very nice non-fiction book by a well known historian.  Recommended for readers aged 10 and up.

Captain’s Command by Anna Myers. The story of 12 year old Gail Harmon living in Stonewall, Oklahoma.  Before her father had left for the war, he had given Gail a golden retriever puppy, which she named Captain and told her to look after her Uncle Ned.  Uncle Ned had been blinded early in the war, and has been bitter and depressed ever snce. The family receives news that her father had been shot down over France and is now considered missing in action, but her mother who refuses to believe the worst has happened to her husband.  Each chapter begins with a bit about two airmen, shot down over France, one very badly wounded.  On Christmas they receive a letter from one of the airmen telling them how he and Gail's father had been hidden by some French farmer and that her father had died in their barn and was now buried there.  This new causes Uncle Ned become even more despairing and he decided to run away. Now it is up to Gail and Captain to find and help him. This is a story about family, kindness and sacrifice, and a Jewish Santa named Mr. Weise.  Recommended for readers ages 9-12.

Christmas Sonata by Gary Paulson, illustrated by Leslie Bowman. Paulson grew up during World War II and there is supposedly an autobiographical basis for this novel.  It is the story of a 6 year old boy whose father is away, fighting in Europe and whose mother has had to take a job in a laundry to help support the two of them. Christmas is coming and the boy still fervently believes in Santa until one day when he sees his mean, nasty neighbor dressed as Santa and drinking wine.  His belief in Santa and the magic of Christmas are destroyed by this.  Shortly afterwards, he and his mother travel to visit his cousin Matthew, Uncle Ben and Aunt Marilyn in Minnesota. Matthew, who is bedridden and dying, has also lost his belief in Santa and it will probably be his last Christmas.  But when Uncle Ben hears the boys talking, he decides to do something. Can he pull of a real Christmas miracle?  Recommended for ages 9-12.

Molly’s Surprise, a Christmas Story by Valerie Tripp. Part to the American Girls collection, this is the third story about Molly McIntire. It is almost Christmas, but Molly's father, Dr. McIntire, is away, working in a hospital in England and she is missing him very much.   Her grandparents are supposed to visit and bring a Christmas tree with them, but call to cancel the trip.  Their car has a flat tire and they can't get a new one because of the rubber shortage and there is no one who can fix it until after the holidays.  It looks to be a sad Christmas for the McIntire household until Molly and her sister Jill decide to pool their money and buy a rather sparse, but affordable tree for the family. A few days before Christmas, there is a wonderful snowfall and while playing in it, Molly and Jill find a box from their dad that had gotten buried under the snow.  They decide to hide it until Christmas. Finally on Christmas morning, the McIntires open the box and have more than one special Christmas surprise from Dr. McIntire.  Recommended for readers ages 8-12.


These are three book I haven’t own and haven’t read, but I believe they are very good stories and I include the publisher’s abstract (even though I don’t normally like to do that) 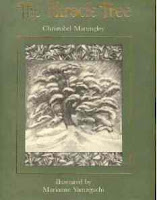 The Miracle Tree by Christobel Mattingley, illustrated by Marianne Yamaguchi. Separated by the explosion of the atomic bomb, a husband, wife, and mother carry on with their lives in the ruins of Nagasaki and are eventually reunited one Christmas by a very special tree. 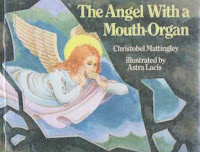 The Angel with a Mouth-Organ by Christobel Mattingley, illustrated by Astra Lacis. Just before the glass angel is put on the Christmas tree, Mother describes her experiences as a little girl during World War II when she and her family were refugees and how the glass angel came to symbolize a new beginning in their lives.

Izzie: the Christmas that almost wasn’t by Budge Wilson. This is the second book of a trilogy in the Our Canadian Girl series. Izzie and her family are preparing for a special Christmas in their coastal Nova Scotia village. The year is 1941, and with soldiers, sailors, and ships crowding into nearby Halifax, World War II seems especially close at hand. But this year, despite the war and rationing, Izzie's grandparents, aunt, uncles, and cousins are coming to spend the holiday. When a terrible storm threatens to spoil everything, Izzie is bound and determined to save Christmas for everyone.
Posted by Alex Baugh at 10:59 AM

Email ThisBlogThis!Share to TwitterShare to FacebookShare to Pinterest
Labels: Christmas