The Diary of a Young Girl by Anne Frank

I know I can write. A few of my stories are good, my descriptions of the Secret Annex are humorous, much of my diary is vivid and alive, but… it remains to be seen whether I really have talent.
5 April 1944 (pg 247) 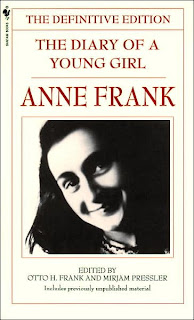 Today is the last day of Banned Book Week and I thought I would take a look at the history of Anne Frank’s famous diary and how it made its way into the arena of controversial books.*  Anne received her diary for her 13th birthday and used it to record her intimate thoughts and feelings about growing up and about life in the annex where she was in hiding from the Nazis for two years with seven other people.  Since it was first published in 1947, The Diary of a Young Girl has turned out to be a real chart topper – it is among one of the best selling young adult books of all time and it tops the list of commonly banned children’s books in public schools nationwide.

Its post-war history began when Anne’s manuscript was given to Otto Frank, the only surviving occupant of the secret annex, by Miep Gies when he returned home in1945 after being liberated from Auschwitz. As it happened, Anne had written two versions of her diary while in hiding, designated now at Version A and B. Version A is the original version. Version B is a rewrite of Version A and was done by Anne in 1944. She was hoping to publish it after the war was over. Version C is the diary edited by Otto Frank, a pick and choose combination of Versions A and B, in which he wrote in an epilogue that few kids probably read (including myself): ‘Apart from very few passages, which are of little interest to the reader, the original text has been printed.’

Version C is the edition that I read. It was sitting on a shelf at home and, one day when I was 11, I picked it up and read it. At some point, later on, I remember finding out that the diary had been edited. My friends and I, in our youthful zeal for truth, were incensed to think that her father had censored his daughter’s work, which amounted to about 30 percent of the original diary, having to do mostly with sexual references and Anne’s criticism of the other occupants of the attic.
This editing also proved to be most unfortunate when David Irving, a Holocaust denier, made allegations that Otto Frank, recognizing its financial possibilities, had written parts of the diary himself, and so it could not be taken seriously since it was a forgery. Claiming that a young girl’s record of her life in hiding is a sham also constitutes some form of censorship. Although it doesn’t seek to stop one from reading it, it does call into question its reliability for some people and devalues what had been Anne’s experience.

But Anne’s father wasn’t the diary’s only censor. The original Dutch publisher wanted certain tasteless or unseemly passages eliminated, mostly having to do with her development and sexual curiosity. The German publisher censored their edition of the diary by removing anything that would be offensive to German readers. In the United States, in 1982, it was challenged in Wise County, Virginia due to protests of several parents who complained that the book contains sexually offensive passages and undermined adult authority when Anne criticizes her mother. According to Dawn Sova in her book Literature Suppressed on Social Grounds, people have objected to the diary because Anne writes about the mistreatment of Jewish people. In 1983, four members of the Alabama State Textbook Committee called for the diary to be rejected because it is a “real downer.” In1998, it was removed for two months from the Baker Middle School in Corpus Christi, Texas after two parents charged that the book was pornographic. The book was returned after students waged a letter-writing campaign to keep it, and the review committee recommended the book’s retention. In 2010, The Diary of a Young Girl: the Definitive Edition was challenged and removed from the shelves of all Culpepper County, Virginia public schools and replaced with the original edition edited by Otto Frank (Version C.) The reason for this was one parent’s concern over the sexual nature of the unedited Definitive Edition.

Anne’s diary is now almost as infamous as it is famous. Recently it was the subject of a work by Francine Prose called Anne Frank: The Book, The Life, The Afterlife. In it, she looks at the diary not simply as the causal writing of a teenager but as a real work of art and Anne as a serious, prodigious writer. Anne has indeed achieved her goal of becoming a talented writer, and, through her writing, she has achieved her other goal of living on even after her death, but not without controversy and most unfortunately not the way that she had dreamed it would happened. 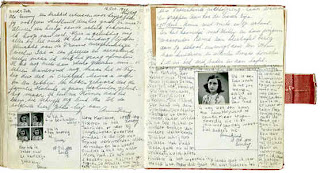 A page from Anne's diary
﻿A more in depth look at the history of Anne’s diary can also be found at
http://www.annefrank.org/en/Anne-Franks-History/A-diary-as-a-best-friend/At-last-seriously-taken-as-a-writer/
This is an excellent site about Anne Frank and I would encourage everyone to explore it.

﻿
*I will look at the content of the diary in the near future.
Posted by Alex Baugh at 10:50 AM