Keep Smiling Through by Ann Rinaldi 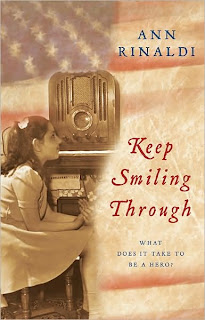 Like all her historical fiction, Ann Rinaldi has written a novel that gives a very good picture of life in a particular era; in this case it is the home front in New Jersey during the spring of 1944. The title is taken from the second verse of a popular song (We’ll Meet Again) sung by Vera Lynn and ‘keep smiling through’ becomes the maxim by which the main character, 10 year old Kay Hennings, tries to live. But when her courage is tested, she discovers that it isn’t always easy to do this. Kay is the youngest in a family of two older sisters, two older brothers, a detached father and a self-centered, mean spirited pregnant stepmother the kids call Amazing Grace behind her back. She is a woman who “killed happiness in our house wherever it tried to grow.” (pg 2)

Kay’s test of courage begins when the housekeeper she is very attached to, Queenie, tells her that she will be leaving that night to live and work Brooklyn. Queenie tells Kay to ‘keep smilin’ through’ and things will be ok. But they aren’t. The next morning Kay is told to pick up some eggs after school from scary Mrs. Leudloff. Mrs. Leudloff is German and Martin and Tom, Kay’s brothers, are convinced that she is a spy and her dog is a Nazi dog, because she has been heard listening to a short wave radio.

Later, at school, Kay discovers that her best friend’s brother was lost at sea after his ship was torpedoed. Jen is now surrounded by the Golden Band, a group of the most popular girls who take Jen under their wing, even though they had previously considered Kay and Jen beneath them. In less than 24 hours, Kay has lost two friends, as well as her mittens and must now buy eggs from a German spy. But then Mrs. Leudloff is surprisingly nice to her and Kay likes her, which is good since Kay must buy the eggs from her throughout her lonely, otherwise friendless spring.

That summer, Amazing Grace’s parents come to stay with the family. Kay is happy they are coming. Nana, who is Austrian, and Grandpa, a German, are very good to the kids even though Grace treats them no better than she does anyone else.

One hot summer afternoon, Grandpa takes Kay to get ice cream from his friend Ernie. He tells her to stay at a picnic table and eat her ice cream until he returns and goes off to chat with Ernie. After a while, Kay goes to find him, and overhears Ernie and Grandpa talking about Hitler and the Third Reich. Then she sees Ernie give him a pamphlet from Germany. Before Grandpa can look at it, a group of men drive up. They shove Grandpa out of the way and go after Ernie, accusing him of being a Nazi and holding Bund rallies. When they hear Grandpa’s German accent, they turn on him, calling him a Hitler lover, pushing him to the ground and seriously injuring him. As they drive off, Kay memorizes the license plate on the car, then picks up and hides the pamphlet that Grandpa was holding.

This incident changes Kay’s life. After the men are caught, reporters would like interview Kay, but Amazing Grace wants to control what she tells them, afraid of what Kay may say about Grandpa. For her part, Kay is worried about whether or not she can be brave enough to do the right thing. Ultimately, Kay decides “I must do the right thing…Like Britt Reid. Or Superman. Or Betty Fairfield. I must fight for truth and justice and go against all the people who want to destroy America.” (pg 138)

Throughout the novel, popular radio programs are brought up in the context of patriotism, bravery and battling evil. Shows like Superman, The Lone Ranger, Hop Harrigan, The Shadow, The Green Hornet and Jack Armstrong are just a few of the radio programs children and adults faithfully listened to during the war, just as Kay and her family did. These larger than life heroes continually faced and battled evil and each time they were victorious. Throughout Keep Smiling Through, these are Kay’s role models, but she then learns that in real life “you can be good and do the right thing and sometimes it all goes bad for you anyway.” (pg 1)

This is a well researched novel with lots of small everyday details that help give the reader the flavor of the time, showing how everything in life was directed at inspiring patriotism and loyalty, as well as the importance of radio heroes and popular music as ways of dealing with war anxiety. Rinaldi has cleverly centered Kay’s dilemma on the continued covert activities of the pro-Nazi German-American Bund, even though the Bund was outlawed in New Jersey in 1935. This was an interesting story; although at times I thought the story line became a little fuzzy in regards to the character of Amazing Grace. Nevertheless, it is definitely a worth while read.
Posted by Alex Baugh at 11:47 AM