In Spite of All Terror by Hester Burton 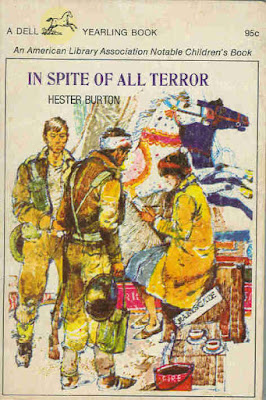 In her New York Times review of the novel Time of Trial, Mary Stoltz wrote:
“When Hester Burton…writes a historical novel, it is not a modern romance with appliqués of research but a sound portrait of the period, presented with unobtrusive scholarship.” (NYT Book Review, May 10, 1964) This description could just as easily be applied to Burton’s 1968 World War II novel In Spite of All Terror, an ALA Notable Children’s Book. The title is taken from a speech given by Winston Churchill on 13 May 1940 in the House of Commons:

“Victory at all costs, victory in spite of all terror, victory, however long and hard the road may be; for without victory, there is no survival.”
Burton’s novel begins in 1939, a year before this speech. Liz Hawtin, 15, has been living with her Aunt Ag, Uncle Herb and their children in a poor section of London since her father died in an accident when she was 12. Her mother died when Liz was 3. Liz knows that Aunt Ag resents having to care for her, even though her father’s insurance money pays for her private school (which he insisted she go to) and helps support the family. But now the money is running out and it is possible that Liz may not be able return to school for her last year.

Then the Germans invade Czechoslovakia in March 1939 and Britain announces plans for evacuating all school children to the country in case of war at government expense. In September 1939, Britain and France declare war against Germany and evacuations begin. Liz is sent to Chiddingford, in Oxfordshire and billeted with the Brereton family, consisting of Professor and Mrs. Brereton, sons Miles, Ben and Simon and their grandparents, General and Lady Brereton. She is happy to get away from her aunt until she discovers that Mrs. Brereton wants a boy evacuee as a companion for Miles. Although Liz once again feels like an unwanted intruder in someone else’s home, she does form a strong bond with Ben, Simon and their grandparents.

Liz has many good things in her life, which she doesn’t seem to appreciate and is an annoyingly self-absorbed girl. “What an unpleasant sort of girl I must have been?” she would think [later in life] in anguish. “How arrogant and bitter and full of self pity I was!” (page 15) But this coming of age story is about Liz’s personal victory over her own self-centeredness in spite of all the wartime terrors she faces. The turning point comes when the General and Ben sneak off to answer the call for all small boats to help with the Dunkirk evacuation. Liz realizes what they have done, running away to help them. But they refuse to take her and, after sailing down the Thames, she is dropped off at Ramsgate and told to go home. Volunteering to write out telegrams for the exhausted, wounded returning soldiers instead, Liz begins to appreciate the danger that all the men and women of Britain willingly face everyday in order to bring about victory. It is this realization that motivates Liz’s behavior for much of the rest of the story

This novel held my attention throughout and I, like the NY Times reviewer, found it to be an excellent portrait of the period without it ever feeling like it was a school history lesson. Burton’s detailed descriptions of events during the early days of the war are graphic and chilling, but provide a vivid picture of life in Britain. They are aided by the excellent black and white illustrations by Victor G. Ambrus throughout the novel. One interesting point was that Liz’s father was a communist. Burton describes how, when he wasn’t working in a print shop, he would stand on a wooden box and urge his fellow workers to join the Communist Party, but she never does anything more with it and his views seem to have no influence on Liz’s life whatsoever.