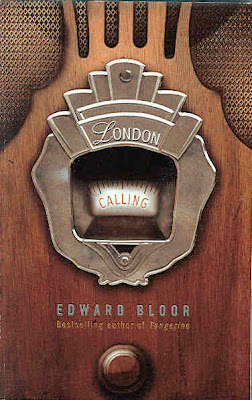 When his hated All Soul’s Preparatory School in New Jersey is finally let out for summer, Martin Conway, 13, becomes what he calls a basement dweller. Living in the basement bedroom previously occupied first by his manic-depressive uncle and later by his alcoholic father, he only leaves to eat, occasionally to go to the store, and once to attend his grandmother’s funeral. At the funeral, he learns that she has left him the old Philco cathedral style radio that his grandfather used when he was assigned to the US Embassy under Ambassador Joseph Kennedy in London during World War II.


Martin takes the radio home and sets it up by his bed. He tunes it between stations and falls asleep listening to the static and looking at the amber glow of the dial. One night he ‘dreams’ that he is speaking to an 8 year old English boy named Jimmy, who asks Martin “Johnny, will you help me?” He has already spoken to Martin’s grandmother when she was alive, and she had said that Martin would be able to help him.
Martin finds himself somehow transported back to London during the Blitz in 1940. Jimmy is quite a talker and mentions all kinds of everyday things that only a person living then would know. The next day Martin begins looking for information about these things, and, to his surprise, many turn out to be real.

Altogether Martin sees Jimmy three times – always in London and each time Jimmy asks “Johnny, will you help me?” and tells Martin that they are at a point, a critical point. 8 September1940 is the first night of the Blitz and the two boys go to the US Embassy where Martin sees how Jimmy and his father, a member of the Auxiliary Fire Service (AFS), interact. On 15 September1940, as the Blitz continues and the RAF has its first victory over the Germans, Jimmy and Martin again go to the Embassy and witness some questionable behavior among the generals working there and a woman named Daisy Traynor. Finally, on 29 December1940, the night that St. Paul’s Cathedral escaped total destruction despite the incredible fire bombing in London, Martin realizes why Jimmy needs his help.

London Calling is a novel about critical points, as Jimmy keeps reminding Martin. A critical point is that point in time when a crucial decision must be made; in London Calling, each visit provides Martin with information that turns out to be factually correct but historically inaccurate, prompting Martin to asks his sister Margaret so many years later
“Who decides what ‘the real history of a time’ is?”
“Martin, that is a brilliant question. And the simple answer is – the winners decide…” (page 109)

I liked this novel once I got into it, particularly the main character, but there is just so much going on that it is almost impossible to give a simple bare bones summary of it. It is a classic coming of age story that includes time travel, Catholicism, mysticism, bullying, and father/son relationships. Bloor brings in more historical information than most novelists who write about World War II for young readers, so it would be a field day for a social studies teacher to use.

There are also a lot of parallels and coincidences in the story, for example, the endurance of both the old cathedral radio and St. Paul’s Cathedral during the war, the continued appearance of Rembrandt’s painting of Abraham and Isaac and father and son struggles, and Jimmy’s question “Will you help me? and Britain asking the US for help to fight the Nazis and Ambassador Kennedy's unwillingness to support war aid to Britain. This is viewed as America turning its back on the UK and is symbolized by Kennedy leaving London during the bombings. Sometimes there are a few too many coincidences or the action is a little too far fetched, but I don’t mind that in a fantasy novel. The majority of the story takes place in the present, with three chapters in the past, but these chapters are just packed with action and information. Interestingly enough, I thought, as I read the book, that Edward Bloor was a British writer, and was surprised to discover he is American.
Posted by Alex Baugh at 7:49 AM