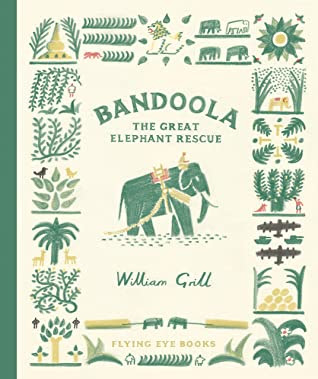 Bandoola: The Great Elephant Rescue
written and illustrated by William Grill
Flying Eye Books, 2022, 80 pages
I wanted to read this book before I knew anything about it simply because it is about Asian elephants, I loved the colors and arrangement on the cover and it is by William Grill. What I didn't know is that it is also an interesting true World War II story, as much as it is about James Howard Williams and the elephant he bonded with.
Grill begins by giving some background information about animal and forest life in Myanmar (formerly Burma) and the important role Asian elephants have always played in its economy, especially when it came to harvesting and transporting of timber. 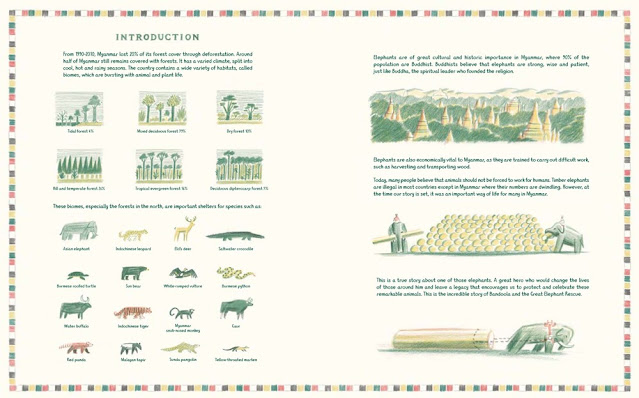 After serving in World War I, Williams applied for a job with the Bombay Burma Trading Corporation. He became the overseer involved in cutting down and transporting the giant teak trees found in Myanmar and responsible for 70 work elephants. Impressed by these animals, Williams took the time to learn all about them. Here Grill digresses with a series of 2 page spreads giving general information about elephants, facts about elephant behavior and history, a description of the demanding job of being a timber elephant, the job of the ooziers or the men who are elephant riders, trainers and keepers and an accounting of how the timber is transported, how elephants are captured and trained, and introduces readers to Po Toke. 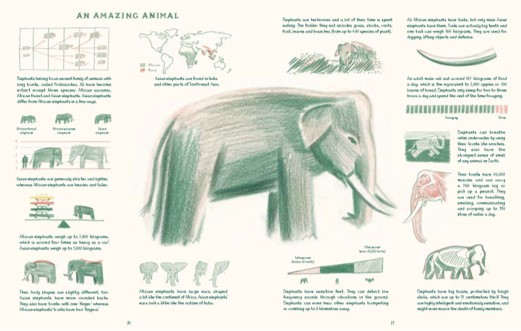 Po Toke was a young oozier who raised a young calf named Bandoola with a kindness and patience unusual for that time.. Po Toke introduced Williams to Bandoola and the three of them had an instant connection and bond. Seeing how well Bandoola responded to Po Toke's gentle training, he and Williams opened an elephant school devoted to training elephants compassionately. The school was soon followed by an elephant hospital.
But, by now the Second World War had begun and in 1942, the Japanese began an invasion of Myanmar, putting elephants, ooziers and everyone else in the camp in danger. 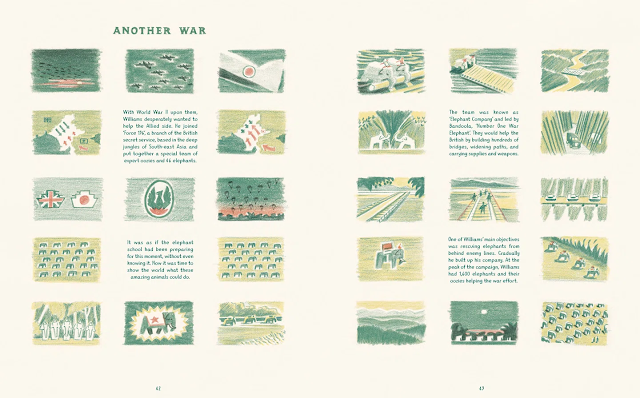 In 1944, Williams was order to evacuate and travel to Assam, India where he would be safe. But Williams wasn't willing to leave the elephants in his care to their fate at the hands of the Japanese army. It was decided that a party "of 64 women and children, 53 elephants, 40 armed soldiers, 90 ooziers and assistants, and four British military officers" would also leave the Myanmar jungle and travel to safety. To get to safety, they would face "190 kilometres [about 118 miles] of perilous jungles, with countless towering mountains, as well as the very real threat of attacks from tigers or human enemies." 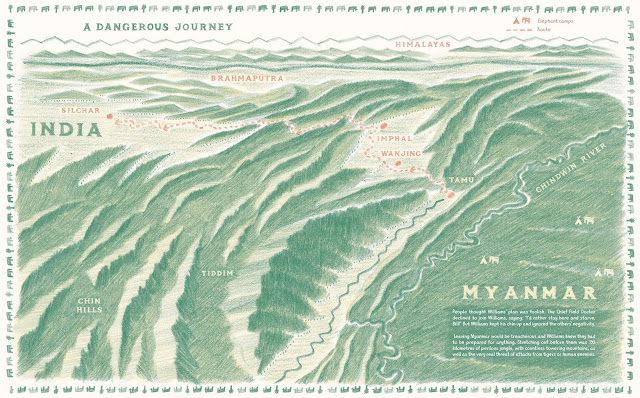 How did they get across those mountains? To help readers understand just what an arduous journey Williams and his party faced, Grill details the difficult terrain in a 2 page spread. The terrain was difficult, but a wall of rock felt like a real impasse. And Williams came up with an impossible plan - build an elephant stairway, with Bandoola leading the way. 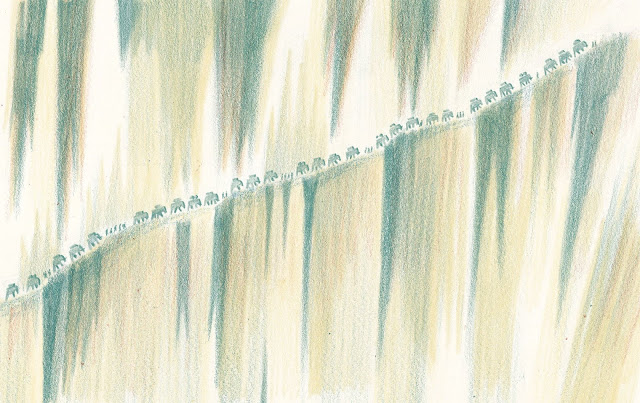 Amazingly, Williams' plan worked and the arrived in India three weeks after leaving Myanmar.
I found this to be such a fascinating story that I've reread it a number of times, even renewing my library copy several times (I think it might be time to buy my own copy). The text is spare but no word is wasted, with Grill letting the illustrations tell half the story. Yet, he has really captured the bond between Williams, Po Toke and Bandoola. The escape and rescue of the elephants is a thrilling and scary part of the story, especially when I think about those magnificent animals walking on a narrow path on the side of the mountain, with a sheer drop if any had lost their footing.
Grills illustrations are done using color pencils and are mainly in shades of greens and yellows which really give you a sense of being in a jungle. Other pages are done in pinks and blues reflecting the jungle's amazing sunsets. Grill points out that Williams' compassionate approach to the training and care of elephants is still being used today, but that elephants are still not completely safe. But though the elephant population has diminished, Grill ends on a hopeful note for the future relationship of man and elephant.
Back matter consists of an illustrated glossary, an appendix and suggestions for further reading, as well as a variety of websites. I highly recommend this book.
Posted by Alex at 7:23 PM