Rosie the Riveter: The Legacy of an American Icon written and illustrated by Sarah Dvojack 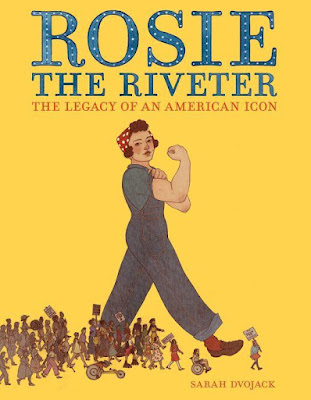 Rosie the Riveter: The Legacy of an American Icon
written and illustrated by Sarah Dvojack
Imprint, 2021, 40 pages

When America went to war in 1941, men enlisted in droves to defend their country. But that left the workforce at home depleted and America needed people to step up production of war materials of all kinds. Women were perfectly willing to fill that need and in 1942, American women pulled on some overalls, wrapped their hair in a scarf, slung on a tool belt, and the figure of Rosie the Riveter was born. 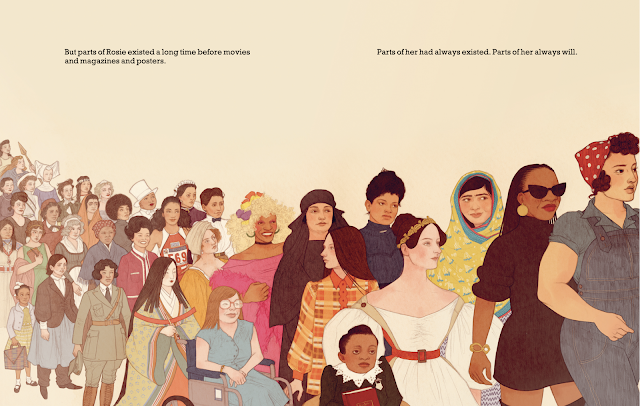 Now, Sarah Dvojack has captured that image in her biography of Rosie and all the Rosies who can before and after WWII. Because there have always been Rosies, they were just the unsung heroes in history. But WWII changed all that. 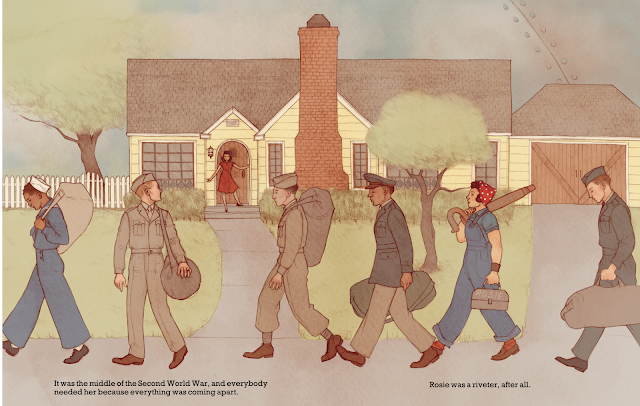 Not allowed to fight. pretty soon, Rosies were working not only in offices, but were riveting airplanes and war ships, traditionally jobs help by men, but now in the very capable hands of women.

It didn't take long for the image of Rosie the Riveter to become an icon in WWII popular culture. There were songs, posters, magazine covers, even a movie about Rosie. She was the hero that kept the home front going all through the war. But then the men returned and wanted their jobs back. Dvojack writes that Rosie had become such a powerful symbol that women could use in their fight to remain part of the workforce and then Rosie became a movement, with rallying cry "We can do it!"

I really liked the way Dvojack brought Rosie into the present showing young readers that as a symbol for women she is relevant in all fields and not just as a riveter - that there's some Rosie in every job a woman does and all of her achievements.
Rosie the Riveter is a wonderful picture book for older reader introducing them to the home front in WWII, and exploring the why and way she is still so relevant in today's world. I particularly liked the pencil and subtle hued digitally colored illustrations. They are so clean and clear and so inviting.
Back matter include more information about Women, Work, and War, as well as popular culture renditions of Rosie. Check out the end papers and pages 16-17 to find other Women Heroes depicted in this book, all of whom are identified on the copyright page.
This book is recommended for readers age 8+
This book was borrowed from the Queens Public Library
Posted by Alex at 11:40 AM