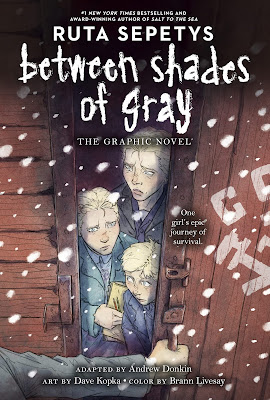 Ruta Sepetys Between Shades of Gray: The Graphic Novel
adapted by Andrew Donkin, art by Dave Kopka, colors by Brann Livesay
Philomel/Penguin Teen, 2021, 160 pages
I can't believe it has been 10 years since I first read Between Shades of Gray. It was one of those books that introduced me to a new aspect of WWII and it had such a profound influence on me when I read it, one that has stayed with me ever since. Although the novel is still certainly well worth reading, so is the new graphic novel about what happened to 15-year-old Lina Vilkas and her family.

Lina is arrested by the Soviet secret police or NKVD along with her mother and younger brother, Jonas, taken from their home in Kaunas, Lithuania on the night of June 14, 1941. Loaded into a truck along with other families that had been rounded up, the Vilkas soon find themselves at a remote train station, where other truckloads of arrested Lithuanians are arriving.

Everyone is put into crowded cattle cars that just sit there for days. During that time, Lina meets Andrius and the two sneak out together at night. Lina is hoping to find her father since they don't know what has happened to him. Just before the trains leave the station, she finds her father in another train.

The family is happy to know he is still alive even if they don't know what will happen to him. When their train finally leaves the station, they spend the next 42 days traveling to a remote area of Siberia, where they are forced to sign a paper that convicts them of crimes against the Soviet Union (their crime - simply being Lithuanian) and sentences them to 25 years of labor.

Life in Siberia is hard, the winters are brutal and the degradations constantly inflicted by the Soviets make things even more difficult. Over time, Lina and Andrius find that they are attracted to each other, but often harsh conditions come between them. Eventually, they are separated when Lina and her family are sent to another prison camp in Siberia, where she finds life with Andrius even harsher. 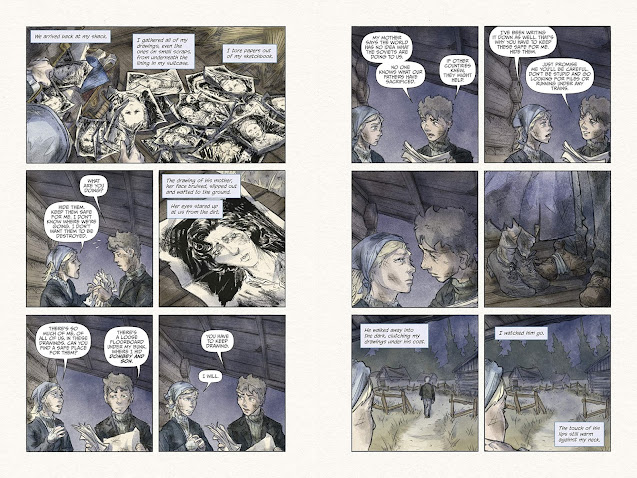 Lina manages to document everything that happens to her, her family, and everyone else using her artistic talent and drawing it all on whatever paper she could find and using whatever material she could draw with. She also manages to send letters to her father in another prison camp in the hope that they will reach him. But can her dream of her family being reunited after the war keep Lina's hopes and spirits up long enough to survive?
I'm always skeptical of novels that have been turned into graphic formats. It feels like a novel has so much depth that could easily get lost. But I am glad to say that Between Shades of Gray: The Graphic Novel has made the transition successfully and it is all thanks to the wonderful images that really capture so much of what happened to Lina and her family. The text is spare yet spot on, and the images are so detailed and should be throughly explored for what they have to say, too. Take, for example, this image of the chaos at the train station as truckloads of arrested Lithuanians are forced into the waiting cattle cars: 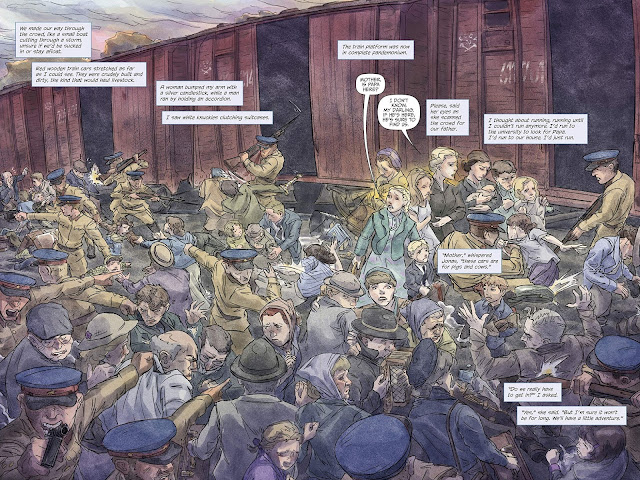 The confusion, fear, harsh treatment and Soviet threat is all there on people's faces and in their body language.
Between Shades of Gray: The Graphic Novel is an excellent addition to the history WWII. The Soviet treatment of citizens of countries they occupied during WWII isn't as well known as the history of the cruel treatment of Jews and political enemies by the Nazis and a graphic novel just may be what some readers are most comfortable with, although I highly recommend the original novel, too.
This book is recommended for readers age 13+
This book was an eARC gratefully received from NetGalley
Posted by Alex at 11:50 AM