Rosie: Stronger than Steel written and illustrated by Lindsay Ward 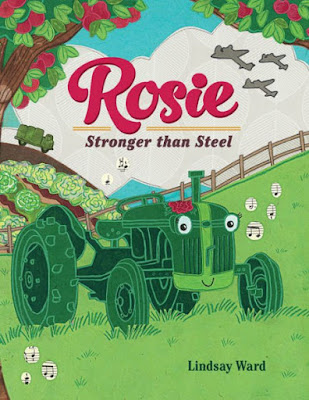 When a country goes to war, it mobilizes all its resources to help win that war. That was certainly true during World War II when men enlisted, children collected paper and cans, people donated whatever metal objects they could, and, women found themselves working in factories and fields, doing jobs traditionally held by men, all to help with the war effort.

The important work of women, those in the factories, collectively and iconically known as Rosie the Riveter and those working in the fields, appropriately known as the Land Girls, is highlighted in this appealing picture book through the eyes of a one-of-a-kind tractor. 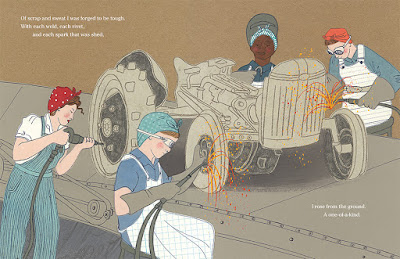 The tractor is made out of donated items, then welded, riveted, painted green, given a lovely rose tattoo, and befittingly named Rosie. All the work is done by a group of women singing as they work.
As she leaves the factory, Rosie promises:

Then, it's off by plane, ship, truck and train, until Rosie finally arrives at her destination - an overgrown farm in England in desperate need of tending. Between Rosie and the Land Girls, working day and night, they spent endless days in the fields, even as enemy planes fly overhead, helping to  provide desperately needed food to troops fighting in Europe to help win the war. 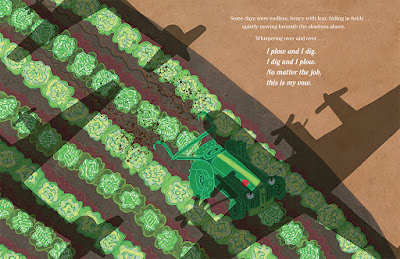 Together, Rosie and the Land Girls also hauled milk containers, and freshly picked produce. They even clear more land together, "Day after day. Year after year." Until finally, Victory! And the war is over.

But what happens to Rosie now that the war is over? 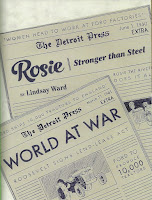 March is Women's History Month and I can't think of a better book for introducing young readers to some of the important contributions of women during WWII. Ward situates Rosie using newspaper headlines that encapsulate not just her story about one tractor's journey, but the historical background upon which it is based.

Rosie: Stronger than Steel is in part written in rhyming verse, and in part, lyrical language. The rhymes are repeated throughout the book, and if your young readers are anything like mine, they will have those verses memorized and in no time at all, you will be hearing "This is our Rosie, / stronger than steel. / She'll plow all the land / with the turn of her wheel."

My young readers are 4-5-years-old and they saw this mainly as a story about a tractor that helped people during a war. Older readers will appreciate the roles of women as well as the call for action during the war, making this a great book for use both inside and outside the classroom/home school room.

Back matter includes a very informative Author's Note about the women who inspired Ward to write Rosie and a bibliography of books about the Women's Land Army, Rosie the Riveter, and Ford tractors.

All readers will love the We Can Do It spirit that permeates the story of Rosie: Stronger than Steel.

Meet the Author:
Lindsay Ward is the creator of the Dexter T. Rexter series as well as This Book is Gray, Brobarians, Rosco vs. the Baby, and The Importance of Being 3. Her book Please Bring Balloons was also made into a play. Lindsay lives with her family in Peninsula, Ohio, where she often sees tractors from the 1930s and 1940s. Learn more about her online at www.lindsaymward.com. And you can follow her on Twitter at @lindsaymward.

This book is recommended for readers age 4+
This book was gratefully received by me from Blue Slip Media.