Masters of Silence by Kathy Kacer 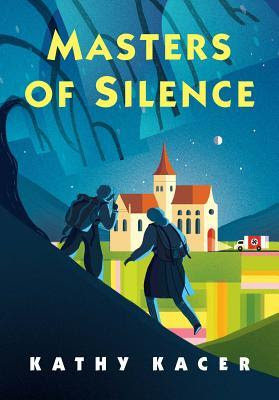 Sometimes, silence can speak louder than words as this novel about the world-famous mime Marcel Marceau shows.

Late one night siblings Helen, 14, and ten-year-old Henry Rosenthal arrive with their mother at a convent in the south of France, having clandestinely traveled there from their home in Kronberg, not far from Frankfurt, Germany. Their father had been arrested on Kristallnacht, and they have had no news of him for over a year now. Frau Rosenthal could hid with a Catholic family, posing as a servant for safety, but not the children and so they have journeyed to France, to a convent that was taking in Jewish children.

After their mother leaves to return to Germany in the hope of one day being reunited with her husband, Helen and Henry have their names changed to more French sounding names. Their new names are Claire and Andre Rochette. They are expected to assimilate into life at the convent and to be very careful about guarding who they and the other children really are, because as Mère Supérieure tells them "There can be no mistakes here...The safety of every child in this convent - the safety of us all- depends on each one of us." (pg. 37-8)

Fortunately both children speak French fluently, and though she misses her parents terribly, Helen begins to adjust to her new life, making friends with the other girls in her dormitory and a boy named Albert. For the most part, she likes the nuns, especially Sister Cecile but has particular difficulty with Sister Agnes, whom it seems Helen can never please and is given punishments for even the merest of reasons.

Henry, on the other hand, withdraws into silence as soon as his mother leaves, refusing to speak to anyone. He spends his time writing in a small notebook he had been given by Sister Cecile, who said that "maybe if he didn't want to talk, he could use it as a diary and write down his thoughts and feelings." (pg 41-2) The first thing he writes is his real name in big letters followed by a Jewish star, clearly in an attempt not to surrender his identity.

Helen is told that sometimes a clown named Marcel Marceau comes to the convent to entertain the children and they all look forward to his visits. And like Henry, the clown doesn't speak while he is performing his show. When the clown finally does come, Henry is immediately drawn to him and the way he can make himself understood without words. Henry begins staying after the shows, learning some of Marcel's miming mannerisms. A bond forms between them and they are soon able to silently communicate with each other.

But after a disastrous visit to the nearby village, where Helen and Henry are confronted by Nazi soldiers, life becomes increasingly dangerous at the convent. When one of the nuns is arrested, it is decided that the children need to be evacuated to Switzerland and safety, a few at a time. On the night that Helen, Henry, and Albert are scheduled to leave for the Swiss border, Marcel shows up to lead the way. It turns out the the clown is also a member of the French Resistance, who has been guiding people to the border all along by pretending to be a Scoutmaster. But as the Nazi danger grows, the trips are more and more perilous. Will they be successful escaping from France?

Masters of Silence is book 2 in Kacer's Heroes Quartet, the first book of which was The Sound of Freedom. And like Book 1, this is a fictionalized story that has its basis in fact - as a teenager, Marcel Marceau was indeed a member of the French Resistance and helped save Jewish children by bringing them to the Swiss border and providing them with forged papers and identity cards.

Masters of Silence is told in the third person, with points of view alternating between Helen and Henry. While is it is not an action-packed novel in the traditional sense, it is a nail-biting, tension-filled story that demonstrates the dangers and the fears that Jews were subjected to under Nazi domination, as well as the strength of one's sense of who they are, and that Jewish identity may be suppressed for safety's but it can never be destroyed.

Helen is certainly a sympathetic character but is it Henry who really pulled on my heartstrings. Locked in his silence, angry, afraid, and traumatized, Henry learns how to communicate his feelings without using words, with the help of Marcel, and in the end, using what he has learned, he transforms into a courageous hero.

This is another excellent novel by Kathy Kacer, one that informs readers of another important yet relatively unknown WWII hero. Be sure to read Kacer's biography of Marcel Marceau in the back matter.