The War Outside by Monica Hesse 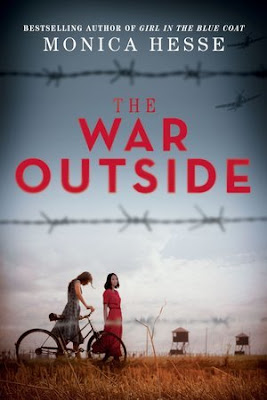 It's August 1944 when Haruko Tanaka, 17, her sister Toshiko, 12, and her mother have just arrived at the Crystal City Internment Camp, in Texas to join their father. They haven't seen Ichiro Tanaka, in five months, not since the government came and removed him from their home, accusing him of passing secrets to the Japanese through his night job at a hotel in Denver, Colorado. Living in Denver, the Tanaka's weren't interned, unlike the people living on the western coast of the United States. Shortly after Mr. Tanaka was detained, Ken, Haruko's older brother, enlisted in the army.

Watching the Japanese families arriving in Crystal City is Margot Krukow, a German American girl, interned in Crystal City with her German-born parents. As the families begin to walk away from the gate, Haruko and Margot catch each other's eye. But it isn't until Haruko's first day of school at the Federal School that she finds out who Margot is. Sitting next to each other, they completely ignore one another while being completely aware of each other. Generally, Japanese and Germans internees don't mix in Crystal City, going to separate schools, shopping in separate commissaries, but Margot chooses the Federal School because the German school is too Nazi for her and isn't accredited.

It isn't until a dust storm hits that the two girls finally speak. Margot pulls the confused Haruko into the icehouse, and before she knows it, Haruko is pouring her heart out to Margot, telling her things she can't tell anyone else. Slowly over time, the two girls find they are attracted to each other, using their meetings in the icehouse to escape the pressure and tension they both feel within their families and at being in an internment camp. Haruko can't help but wonder whether he is guilty of espionage or not, and continually worries about her brother, whose letters are beginning to sound less and less like the Ken she knows.

Margot worries about her mother's health, concerned that her pregnancy will end in miscarriage like the previous ones. And concerned that her father will finally be won over by the Nazi contingent among the Germans in the camp, and that he also may be guilty of aiding the enemy.

When a tragedy strikes the camp, things come to a head and the two girls begin to wonder if they can really trust one another. Because of the way the novel is structured, however, the reader knows right from the beginning that the friendship is doomed and that some kind of betrayal has happened, but not what it is or why. The basis of the novel are the events leading up to that betrayal, if you can really call it that.

The War Outside is told in alternating points of view, switching between Haruko and Margot to give both sides of their story in this family internment camp and the events that lead to the conclusion. It is told from the perspective of the present but there are interruptions by both girls that refer to the narrated events from a future perspective. It's an interesting device and by the second interruption (there aren't that many), I did not find them at all disconcerting, but rather interesting and made me even more curious to see what they are talking about.

Still, given the way the relationship between the girls unfolds, and the way their respective home lives are depicted, I wondered where this novel or should I say where the relationship between the two girls was going. The writing is certainly compelling, the descriptions of life in this particular internment camp are incisive and accurate, all of the characters are realistically flawed and believable, but in a place where there was no privacy, where armed guards watched internees from towers spaces along fences topped with the barbed wire, and walls were paper thin, and where Germans and Japanese don't fraternize, I have to admit I did kind of assume where the story was heading. Boy, was I wrong! Boy, did my jaw drop! I did not see that coming.

The War Outside is a very interesting coming of age novel. It is part romance, part mystery, and historical fiction at its best. Monica Hesse has really done her research resulting in a clear picture of what life was like in Crystal City. Crystal City was not quite the same as the other internment camps in that it was a place for people of Japanese, German, and Italian ancestry who were considered to be "enemy aliens" or spies. It was not run by War Relocation Authority, but by the Immigration and Naturalization Services (INS) division of the Department of Justice and yes, forced repatriations were carried out from there. I suspect that on several levels this novel will resonate for today's readers.

Do read the author's A Note on Historical Accuracy to discover how she researched this novel as well as what events really happened in Crystal City and how they were seamlessly incorporated into The War Outside. It is s fascinating as the novel.

There are lots of real places that were part of life in Crystal City used in The War Outside and this map may help orient readers: