The Holocaust: The Origins, Events, and Remarkable Tales of Survival by Philip Steele 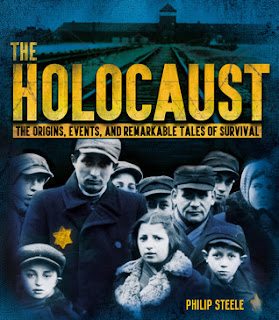 I have to be honest and say that I am never sure about books like this.  I have thought long and hard about this book that introduces readers to the Holocaust using charts, pictures, maps, and brief text.  Philip Steele, the author of many well received nonfiction children's books, begins this history of the Holocaust by introducing his readers to Jewish roots and religion in the Middle East and the diaspora, followed by a short history of Jews in Europe.  All of it leads up the WWI, the aftermath of Germany losing the war, the rise of Adolf Hitler and his Nazi Party and how Jews were blamed for everything that was wrong in Germany.

Interestingly, Steele also includes a section of the books published for young German readers and posters extolling the idea that Germans are a master race.  I found this section particularly interesting since popular fiction for young girls in the Third Reich was the topic of my dissertation.  In fact, much of his focus is on the impact of the Nazi's racism on young people - Jewish and non-Jewish.

Everything about the Holocaust is covered in this book, including the aftermath of World War II, and the trials of those who participated in the extermination of 6,000,000 Jews in their attempt to rid Europe (and later the world) of the entire race of Jews, the later establishment of the state of Israel, and calls that genocide should never happen again.  And as Steele writes, never again also means "offering a safe refuge to victims of war and persecution" instead of country's turning their backs on Europe's Jews when they needed so much help.

So why was I hesitant about this book?  It is, after all, an introductory book, but still part of me felt it painted such a broad picture that young readers would not fully grasp the gravity of what was happening at the time.  And, although the information seems factually correct to me, I felt it should have been sourced better.  There was only a Glossary, and picture credits.  No Bibliography, no suggestions for further reading, or websites for more information.

But then someone sent me this link to YouTube and I realized that a picture book for older readers like this one in a library or classroom might be an important addition after all, at least as a starting point:

This book is recommended for readers age 12+
This book was provided to my by the publisher, Scholastic Press.
Posted by Alex at 8:34 AM