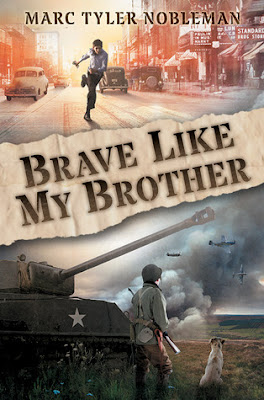 Told in a series of letters written to his younger brother Charlie in Cleveland, Joe relates as much as he can about what life in the army is like after the attack on Pearl Harbor.  The letters begin in June 1942 and run through August 1944, detailing the brother's trials and triumphs.  At first, both brothers are dealing with bullies who are making their already difficult live more difficult.  But Joe is also dealing with uncomfortable conditions in England where he is training for the D-Day invasion.

Most of the letters are from Joe to Charlie and cover things like spending Thanksgiving with an English family who, he is sure, have used all their rations to make a dinner for him.  Or the constant rain and mud and the problems with Matt, an arrogant bully.  Of course, there is the stray dog who adopts these GIs, and catching a German spy that gets them in trouble instead of the praise they expected.

Along the way, Joe makes references to what Charlie has written about things at home and there is a lot of talk about Superman and what makes a hero.  Superman, you may remember, was created by two friends living in Cleveland, namely Jerry Siegel and Joe Shuster.

Like all epistolary novels, the reader is asked to fill in a lot of blanks, but by the end of the book, young readers will really understand what does make a person a hero but begging the question - which brother is the hero or are they both?  Definitely, something to think about.

This is a good book for younger readers interested in WWII (and I am always surprised to discover how many of them there are), and is especially good for classroom use.  There are lots of interesting references that could lead to some wonderful discussions and classroom activities.  Of course, it would be a nice book for kids to read on their own, as well.   The language is simple, there are no difficult concepts that could confuse young readers and no wartime violence that might upset some sensitive kids.

One thing that did bother me was the part where Joe writes to Charlie about a secret mission he was on with his nemesis, Matt. They were assigned to drive an army vehicle to another base and not stop or look at the tarp-covered cargo they were carrying.  Well, as it happens that's when they caught that German spy, and needed to use the tarp so they could walk in torrential rain to the base, leaving the vehicle behind.  To his surprise, Charlie realizes that the cargo is an inflatable jeep, to be used to fool the enemy during the D-Day invasion. Inflatables were indeed used and part of what was called the Ghost Army, but I seriously doubt that Charlie would be writing home about it, given all the previous mention of censors reading letters. The information in that letter would never have made it to Cleveland.

But the Ghost Army is pretty interesting, so I could actually overlook this questionable section of the novel in order to introduce the topic to kids.  After all, what could be more intriguing to young readers than the idea of a ghost army.  I posted a link to this article in The Atlantic about the Ghost Army, but I'll include it again HERE, too.

This book is recommended for readers age 7+
This book was sent to me by the publisher, Scholastic Press
Posted by Alex at 9:10 AM