Playing with Matches by Lee Strauss 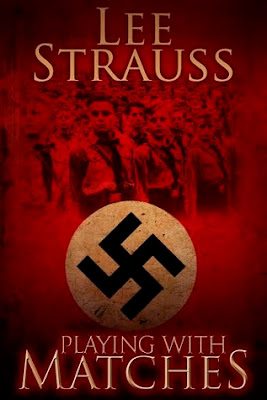 Playing with Matches begins in 1938, when Emil Radle is 9 years-old and a member of the Passau (Germany) Deutsches Jungvolk, anxiously awaiting the day he will be old enough to join the Hitler Youth and begin to learn how to fly.  Emil wants nothing more than to become a pilot in the German Luftwaffe.

But the Jungvolk is hard work and the leader, Heinz Schultz, likes to pick on Emil's friend Moritz for being weak.  Emil is aware that Moritz and their friend Johann aren't really supporters of the Reich and, in fact, neither are Emil's parents.  And maybe Emil isn't either, since he still likes his friend Anne Silbermann, a Jewish girl whose family owned a bakery, and is very upset when he saw what happens to her family on Kristalnacht.

Even after war is declared in 1939 and the youth leaders and his school teacher continue to speak Nazis rhetoric to the kids, Emil half wants to believe what he hears.  Seeing Anne and her mother boarding trains east, he thinks they are being resettled, while Moritz and Johann inform him otherwise.  Other incidents begin to cause Emil to question things more, and his belief in Nazi Germany's greatness begins to waver.

In the summer of 1941, when Emil turns 13, he discovers that Johann and Moritz are secretly listening to BBC reports on a shortwave radio.  When the reports contradict the Nazi reports on how the war is going, Emil's chasm of doubt in the Fatherland widens.  Soon, the boys are joined by Johann's sister Katharina, and all four begin to transcribe the reports and leave them around town for people to read.  And Emil begins to notice he has a strong attraction to Katharina.

The friends continue their resistance activities, as it becomes clearer that Germany is really starting to lose the war.  Emil's father is sent to Berlin for not joining the Nazi Party and isn't heard from for a very long time.  When news breaks about the arrest and beheading of The White Rose group, college students doing something similar to what Emil and his friends are doing, instead of backing down, they continue to distribute their flyers transcribed from the BBC.

Emil's affection for Katharina becomes stronger as time goes by.  In the summer of 1944, after he turns 16, Emil finally asks Katharina to marry him and is happy when she says yes.  But even though the Germans are losing the war, there is still another year of it left.  And it is a treacherous year in which some will survive and some won't.

It's no secret that the Nazis used kids to further their cause, but we don't often get books that look at the lives of those kids.  The book covers 7 years in Emil's life, which probably mirrors the experience of many boys and girls at that time.  Not everyone was a full, enthusiastic supporter of Hitler and his policies the way the leaders of Emil's Deutsches Jungvolk or his teacher are, but there were plenty who did.  And there is one incident in the novel of a girl in Emil's class turning in her parents for saying something against Hitler and that kind of thing did happen.

That said, Playing with Matches is a compelling story that really is a chronicle of one boy's life between 1938 and 1945, character driven rather than plot driven.  And, we meet a remarkable cast of characters that surround surround Emil's life - from staunch Nazis and bullies, to people caught up in a situation they don't support and their little acts of kindness, generosity and the type of support for each other that the Nazis discouraged, and who, it turns out, are real heroes for staying true to their own values and principles even in the face of a regime grounded in hate and violence.

Playing with Matches is an interesting coming-of-age novel, ideal novel for young readers interested in historical fiction, WWII history and for understanding what life was like in Nazi Germany.  It would make a nice companion book to Markus Zusak's novel The Book Thief.