The Safest Lie by Angela Cerrito 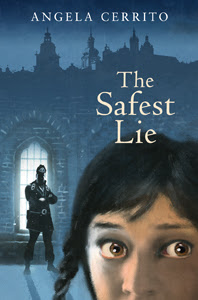 On the day that Jolanta brings a little food, some used clothing and a few vaccinations against typhoid fever to 9 year old Anna Bauman's youth circle in the Warsaw Ghetto, she decides to go home with Anna.  Quietly talking to her parents, Anna knows something is up.

After Jolanta drops off a paper for Anna's mother one morning, she begins to stay home as her mother makes her memorize a new name and other information.  Soon, she is no longer Jewish Anna Bauman, rather she is Catholic Anna Karwolska.  A few days later, Anna and her parents go to a home in the ghetto, where Anna is washed clean of ghetto dirt, and soon the leader of her youth circle, Mrs. Rechtman, shows up to take her away.

Wearing a new school uniform, Anna and Mrs. Rechtman go to the administration building, a building that straddles the ghetto and the streets beyond it.  Swiftly, Anna is passed to a woman who takes her into an office, where she must hide under the desk and wait for someone to come and get her.  The wait is long, but finally a teenage girl carrying a large box arrives and tells Anna to follow her.  They walk out of the building to the streets beyond the ghetto.  From here, Anna travels with the girl to a farmhouse, where she is surprised to find out that the box she and the girl carried so carefully contains a baby that has also been smuggled out of the Ghetto.

At the farmhouse, Anna is taught the traditions, the prayers and the catechism every Catholic child would know, including when to stand or kneel in church.  She is drilled over and over, until she responds automatically to being Ann Karwolska.  Afraid she is going to forget who she is and who her family are, Anna only allows herself to be Anna Bauman at night when she is alone in bed.

Eventually, Anna is sent to a Catholic orphanage away from Warsaw.  Keeping her secret, Anna adjusts to like in the orphanage, even though one girl, named Klara, seems to be out to get her.  Does Klara know her secret?  Hopefully not, because one day, Nazis arrive at the orphanage, pillage it and steal all the food that the nuns used for feeding the children, but not before terrorizing everyone.

Eventually, Anna is fostered out to a family that really welcomes her, and where she feels somewhat safe and comfortable.  Yet, Anna still makes it a point to remember who she is and where she came from when she is alone at night, never telling anyone her secret.  But, as Anna discovers, Stephan, Sophia and their son Jerzy are harboring a secret of their own - a very dangerous secret.

If you have ever wondered what happened to the children that Irena Sendler smuggled out of the Warsaw Ghetto, this is the book for you.  Based on fact, Angela Cerrito has imagined the life of one young girl who survives the Holocaust thanks to the courageous efforts of Sendler and the network of people who were helping her.  It is clear from the start that the lady Anna knows as Jolanta is one of the code named used by Sendler.

And while The Safest Lie doesn't have a lot a action, it does have a lot of suspense, nail-biting tension and shows the reader just how careful and clandestine people in the resistance needed to be.  Anna's story is fictional, but Cerrito has certainly captured all the tension, fear, constant hunger, and suffering that the Jewish children experienced during the Holocaust.  But she also shows the difficulty and mixed emotions parents must have felt when their children were offered the possibility of safety if they were willing to temporarily give them up.

The Safest Lie is a work of historical fiction but it is based on the hundreds of transcripted interviews with children who survived the Holocaust that Cerrito read and which give the novel its sense of authenticity.  Be sure to read Cerrito's Author's Note at the end of the book about her meeting Irena Sendler

There is an extensive Educator's Guide for The Safest Lie available to download from the publisher, Holiday House


This book is recommended for readers age 9+
This book was an ARC received from the publisher.