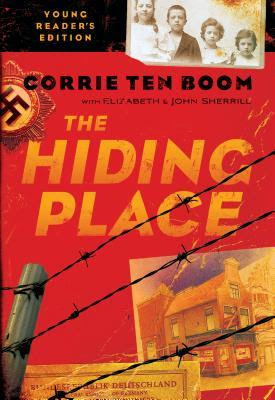 This biography of Corrie ten Boom's work in the Dutch Resistance during World War II has been around since 1971 for adult readers.  Now, the story of this brave woman and her family is available for younger readers.  It is a story that is compelling, inspiring and proves once again that anyone can make a difference in dangerous times.

The ten Boom family had been watchmakers in the Dutch town of Haarlem since 1837, which also served as the family home.  And it was at the 100 year celebration of the family business that Corrie, her sister Betsie and father Casper, already 77 years old, became truly aware to what what happening in Germany.  On this happy occasion, they met a Jewish man who had just escaped Germany after some kids had set fire to his beard, burning his face.

Three years later, in 1940, Holland was invaded by the Nazis. A curfew was put in place, newspapers were taken over and radios were confiscated - well, maybe not all the radios in the ten Boom household.  Jews began to be harrassed and rounded up for deportation.  While a neighbor's shop was being searched by the Nazis, Corrie managed to get the owner, Mr. Weil, into her home without being noticed. It was decided that Mr. Weil needed to go into hiding and Corrie knew just the person who could help - her brother Willem.

After that, it didn't take long and Corrie, along with Betsie and their father, found themselves playing an active part of the Dutch underground.  Soon, a secret room was build into Corrie's bedroom wall and a constant procession of Jews on the run found themselves in this welcoming home and hidden room.  By now, Corrie and her sister Betsie were in their 50s, and their father was in his 80s and with no thought of giving up their underground activities.

Though many in the town of Haarlem knew of the ten Boom's activities, they turned a blind eye.  But in February 1944, someone talked and the family was arrested, but although they searched the house, the seven people in the hidden room were not found by the Nazis (they were rescued later).  Corrie, Betsie and Casper were taken first to Scheveningen prison, Sadly, Casper ten Boom passed away 10 days later, on March 9, 1944.  Corrie and Betsie were sent to a concentration camp in Holland called Camp Vught, which was mainly for political prisoners, but from there, they went to Ravensbrück Concentration Camp in Germany.  It was there that Betsie passed away, but eventually Corrie was released.

Corrie ten Boom's story is so powerful and this shortened version for young readers is ideal for introducing them to this extraordinary woman and her family.  Sometimes an abridged book just doesn't work, but in this case, nothing important is left out and it still reads smoothly.  It is written as though Corrie were right there telling her story, and I may say, quite modestly and with all the surprise that she ended up as part of the Dutch underground as the reader might feel.  You don't expect older people to be the stuff of such heroism, but, as Corrie, Betsie and Casper show us, why not?

Corrie and her family were very religious Christians, members of the Dutch Reformed Church, and their religion was very much a part of their daily lives.  This comes up in the book, especially towards the end and it may put off some fo today's young readers.  However, it should be remembered that the Nazi persecution of the Jewish people was a racial and a religious issue.  It only stands to reason that the deeply religious would be exactly the people who most understand the need to help another deeply religious group.

In 1975, a movie was made about the ten Boom family in World War II, starring Julie Harris as Betsie and Jeanette Cliff as Corrie.  I haven't seen it yet, but hope to soon.  If it is any good, and it seems to be well liked, I will be back here to tell you what I think.

The ten Boom home and watch shop, now a museum:
: 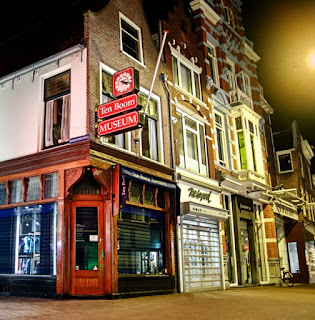 The inside of the ten Boom home showing where the secret room was built into Corrie's bedroom wall: 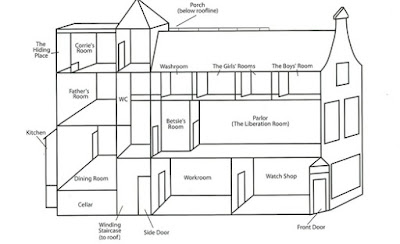 This is book 5 of my 2015 Any War Reading Challenge hosted by War Through the Generations
Posted by Alex at 2:57 PM